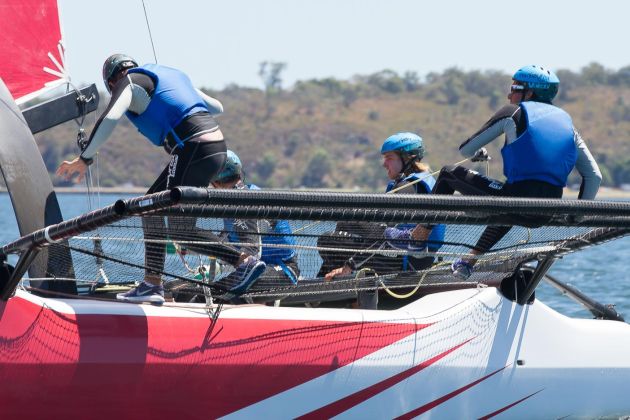 Given that semi-finals and finals will require at least 16 and could run to 18 races, the race committee has elected to remove the semi finals and finals and instead plans to complete the second round robin. To complicate matters, the forecast tomorrow is for lighter breeze.

Brett Burvill moved into second place, equal on points with Steve Thomas and three boats were locked on four wins each.

After yesterday’s capsize most skippers were a little more cautious when bearing away today, and while there were no major incidents, it is becoming clear that in breezes well over 20 knots, the M32’s are a bit of a handful for all except the most experienced crews. It is also becoming evident that these boats are stressed in breezes like those of the past two days, with several winch failures and a furler problem which will require the resail of one of today’s races.

A forecast top temperature of 37 degrees tomorrow will probably mean a longer transition between the morning breeze off the land and the afternoon sea breeze – the famous Fremantle Doctor, but a doctor without the intensity of the past couple of days. The regatta is providing a good shakedown and test for boats, crews and officials so we can be assured of a regatta full of interest when the first round of the World Match Tour is sailed off Bathers Beach next week.