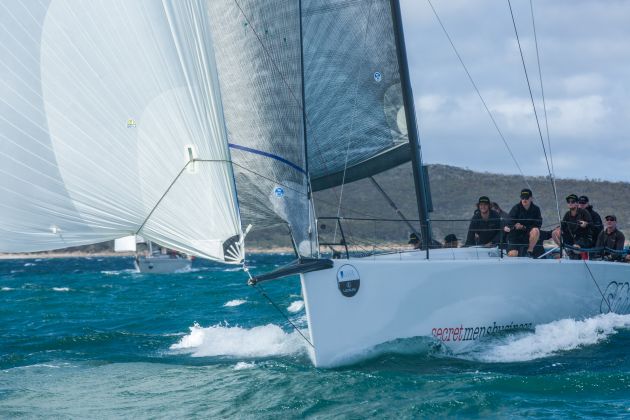 25/02/2016
A DOMINANT display by Geoff Boettcher's Secret Men's Business in Port Lincoln this week helped his team to an overall IRC victory in the state's premier keelboat racing regatta.

The Club Marine/Lexus Lincoln Week Regatta win caps off a successful 2015/16 season for the 52-footer following on from an overall IRC victory at the Geelong Festival of Sails in January and a third overall in the IRC nationals in Hamilton Island last June.

Boettcher finished the regatta on five points with five race wins and discarding a second ahead of the runner up 45-foot Concubine, skippered by Jason Ward.

Ward sailed well to be well clear of third place however wasn't fast enough for the champion, taking just a single race win away from Secret Men's Business after they suffered spinnaker damage in the second to last race.

Boettcher's crew work was just a little more seamless than the other boats in the fleet and the weather conditions and courses seemed to suit the larger boats on the IRC rating system.

David Knights' 38-foot White Knight proved to be a real surprise packet this regatta and narrowly finished on the remaining podium position just ahead of two of the Victorian visitors, Phil Coombs' Simply Fun in fourth and Ashley Trebilcock's Bandit in fifth.

The weather conditions were different every day and sailors had a real challenge ahead of them in order to remain consistent.

The Monday racing was a shifty 10-12 knot southeasterly for two windward-leeward races, the Tuesday was extremely light for the long race to Sibsy Island, the Wednesday race was a short race around the bay that was sailed in a northwesterly with a lot of rain while the final day of racing hit 22 knots for windward-leeward races in the bay.

Secret Men's Business also claimed the division one AMS win ahead of Concubine and White Knight while Melbourne-based Hartbreaker, skippered by Alan Breidahl won on PHS ahead of Derek Morrison's Asylum in second and Keith Finch's Rapid 1 in third.

In division two, Richard Harries' Julia clinched the overall AMS win ahead of Scott Robinson's How Bizarre in second and Jonathan Newbury's Sextant in third while Hayden McFarlane's Misty claimed the PHS honours ahead of Ray Borrett's Laurelle in second and Hugh Longbottom's Academy 1 in third.

In the trailable cruising division, which was competed for on PHS handicap, the Port Lincoln-based Elliott 7, P Plater, sailed by Joe Kelly, Phil Kelly and Jake Clark, took out a convincing win in the seven-boat fleet.

They had the regatta won with a race to spare allowing them to drop their fifth place in the final race on Thursday and claim the overall win ahead of Trevor Baldock's Destiny in second and Randal Cooper's The Calm in third.