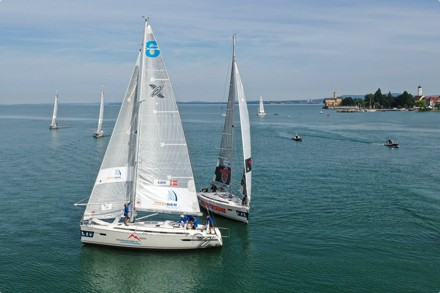 Langenargen, 9 June 2019. The tension increases at the 22nd Match Race Germany. The four semi-finalists have been determined after the quarter-final matches on Whitsunday.

Title defender Eric Monnin and his Capvis Swiss Match Race Team have prevailed against their Polish challenger Lukasz Wosinski (HRM Racing Team). But the two-times winners of Match Race Germany had to fight harder for their spot in the semis than one might have assumed.

“The quarter-finals have been more intense than we have wished for,” admitted boat designer Monnin from the other side of Lake Constance. A right-of-way-violation during a mark rounding in the fourth and final match between Monnin and Wosinski resulted in a penalty for the Polish crew and its elimination whilst the Swiss moved on to the semis.

By that time Max Gurgel’s team VmaxYachting had already succeded in the encounter with Max Trippolt and his team Segelmanufactur from the Austrian side of Lake Constance. The Germans impressed thousands of spectators and their opponents with convincing starts according to all the rules of the matchracing game and won the “Max-Duel” by 3:1.

“Crossing the finish line after the last match has been a relief though,” said Max Gurgel as even the last match saw him winnig the start but the Austrians catching up with impressive speed. This time the team from the Hamburg Sailing Club was able to finish first ahead of enthusiastic crowds at the shores of Lake Constance and in the well-attended race village.

Gurgel advanced to the semis and Trippolt paid tribute to his conquerers, saying: “They were simply better today. They showed us how to exercise the starts. That was very clear today. We were fast on the course but that wasn’t enough although my team pushed me all the way.”

The Slovenian Lumba Match Race Team was certainly amongst the winners of this Whitsunday. Skipper Dejan Presen and his crew provided a surprise in front of the buzzing Gondola Harbour of Langenargen. The Slovenian quintet which has been seventh after the qualification round and been picked as opponent by second-placed Will Boulden and his Alpha Racing Team, found into the regatta better and better and defeated the Australians by 3:1. Presen said: “We had set ourselves the goal to reach the semi-finals and are accordingly happy. We like our position as outsiders. All that’s left now will be a bonus.”

The fourth semi-final spot was won by Knots Racing and its skipper Nick Egnot-Johnson. The duel of the Kiwis against the Danish team of 17 year old Emil Kjaer from Copenhagen went over the full distance of five races. Finally, the somewhat older Kiwis, more experienced in handling bigger boats, prevailed with a winning final run. Nick Egnot-Johnson said, “We are stoked to be heading into the semis at Match Race Germany.”

In the subsequent selection of his semi-final opponent, preliminary round winner Eric Monnin opted for the Slovenian team of Dejan Presen which left Max Gurgel’s team VmaxYachting and Nick Egnot-Johnson’s team Knots Racing to face each other in the second semi-final. In the preliminary round, the Kiwis had won the duel against the Hanseats who are now keen to turn the tide to their favour. Gurgel said: “The Kiwis are sailing really well. They have clearly shown that here. But we were also able to show that we can win matches. I remain optimistic for the semis.”

As preparation, Gurgel did observe the races of his opponents on the water and said: “This way you learn a lot about the handling and the behavior of these boats in light winds. That, too, could help us on Whitmonday.”

On Whitmonday, the big final day, the semi-finalists will have to get up early. The semi-final encounters are scheduled for 8 am because Race Officer Sabine Brugger of the Yacht-Club Langenargen and her team want to use the chance for fair and exciting matches in the view of the promising wind forecast in the early morning. The Grand Final and the Petit Final are scheduled to follow right after the end of the semis. The 22nd edition of the German Grand Prix of International Duel Sailing ends with a public press conference and champagne for the new champions. For some (eliminated) crews it may well end at the party tonight at Castle Montfort, a popular place for legendary parties during Match Race Germany.