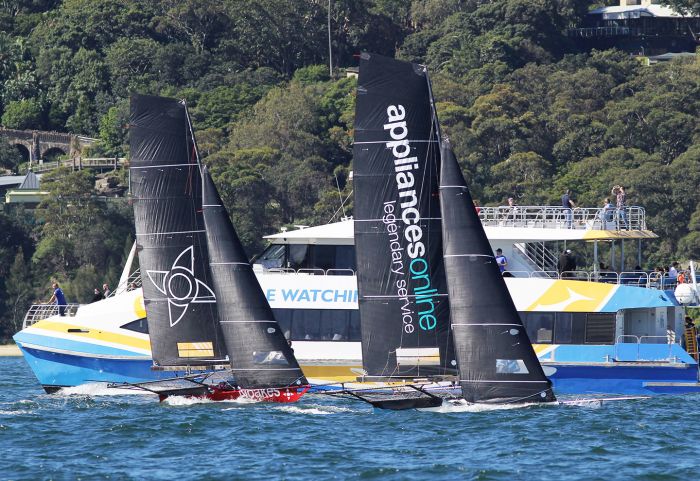 The two leaders set out on the final windward leg of the course. Photo 18 Footers league.

In similar conditions to last Sunday's opening race of the season, Langman and his team were never far from the lead over the entire course and proved too good for the challengers over the final lap of the course, despite having to give away a handicap advantage at the final windward marks. Noakesailing crossed the finish line 42s ahead of Appliancesonline.com.au (Brett Van Muster, Phil Marshall, Kurt Fatouris). Finport Finance (Harry Price, Matt Stenta, Angus Williams) was a further 27s back in third place, ahead of Dal Zotto (Jack Sprague), Yandoo (JohnWinning) and Birkenhead Point Marina (Tom Anderson).

After two races of the Spring Championship, Noakesailing leads the pointscore on 2, followed by Appliancesonline and Yandoo on 9, with Finport Finance, Birkenhead Point Marina and Winning Group (John Winning Jr.) on 15 points.

While the breeze was only around 8-10 knots, the race was a great battle to watch as the positions throughout the entire fleet constantly changed as the wind direction changed.

From the start, Noakesailing, Winning Group and Finport Finance were in a battle for the lead but Smeg (Micah Lane) quickly challenged the trio and actually grabbed the lead as the fleet headed towards Shark Island and the first set of 3-buoys windward marks.

With the advantage of going to the red buoy, Appliancesonline.com.au was first team to set a spinnaker for the run to the wing mark off Clark Island. Noakesailing, Smeg and Yandoo were next and Dal Zotto was in fifth place. This group had edged away from the rest of the fleet and maintained their advantage to the bottom mark at Kurraba Point.

While the left hand side of the course was favoured on the first windward leg, the second work saw the leaders sail further to the south as the wind varied a little in direction.

Despite having to travel to the furthest windward mark, Noakesailing's team were superb as the skiff took the lead from Appliancesonline.com.au, Yandoo and dal Zotto.

The appliancesonline team were looking strong at the time and elected to stay on their same course to the middle of the harbour. This move looked to be a winner but later when the two leaders met, Noakesailing had built up a seemingly unbeatable lead over Appliancesonline. Finport Finance had also sailed well on the long windward leg and actually crossed AOL to grab second place as the three teams headed for the final set of markers.

Appliancesonline's crew threw everything at the leader down the final spinnaker run between Shark Island and Clark Island but were unable to challenge the winner.

The Australian 18 Footers League's 2019-2020 Season continues next Sunday when the club will stage Race 1 of the Club Championship. Spectators can see all the teams in the rigging, then follow the racing on board the spectator ferry, which leaves Double Bay Wharf, alongside the rigging area, each race day at 2pm.