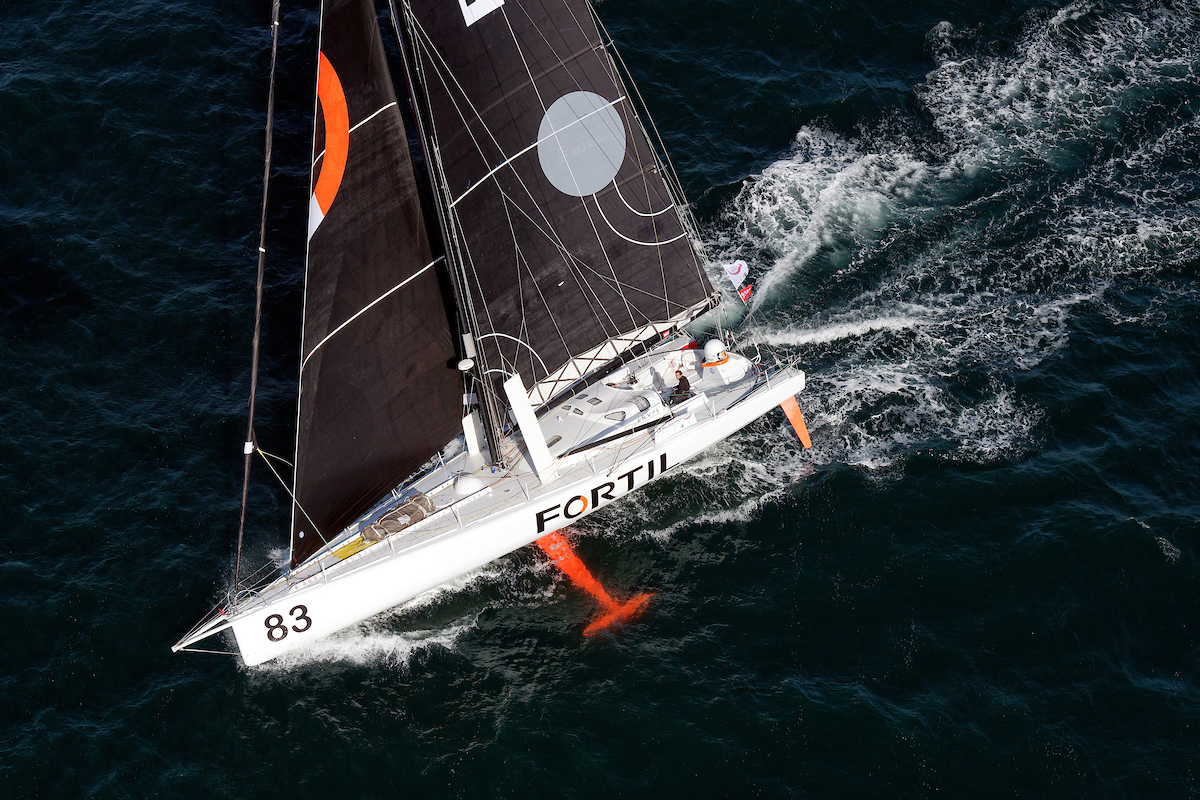 After Damien Seguin and Yoann Richomme, we look at the pair formed by Clément Giraud and Rémi Beauvais (Fortil), based on getting on well together, trusting each other, listening to what the other has to say and being complementary. Aboard an IMOCA launched in 2006, they are aiming for the top five in the non-foilers.

‘Alter ego: a person who fully trusts another and can replace them at any time’, is the definition that applies perfectly to Giraud and Beauvais, the duo on Fortil that will be competing in the Transat Jacques Vabre. In fact, Clément often uses this expression when describing his co-skipper.

Giraud and Beauvais met during the 2005 Mini-Transat. The former was competing, while the second was preparing a boat for another competitor, having taken part himself in this race two years earlier.

“Since then, we have always kept in touch. We sailed together on maxis. Rémi sailed in one transatlantic race after another and got a lot of experience of ocean racing,” explained Giraud.

“He returned to the South of France, and when my IMOCA project began to take shape, I was looking for a boat captain. He was the only one I could think of for that job. He had already worked on other IMOCAS.

“Remi is someone who takes a lot of precautions and someone I get on well with. We understand each other perfectly and our characters work well together. Rémi has a certain wisdom, which is very useful for a brand new project, where you have to be safe and trust in all the technical aspects,” Beauvais finished.

When he needed to choose a co-skipper for the Transat Jacques Vabre, Clément Giraud had no hesitation once again.

“We have sailed a lot of miles together on the IMOCA, in particular on delivery trips. I couldn’t imagine leaving Remi ashore. When I offered to take part with him in the Transat Jacques Vabre, he was over the moon. I wanted us to ‘grow up’ together, if you like, and wanted to learn with my alter ego rather than with a mentor,” Clément added.

Aboard Fortil, Clément Giraud and Rémi Beauvais form a complementary du:. “Firstly, he says no to everything, while I say yes and then after that, we decide,” Giraud said smiling.

“I have a lot of experience up on the bow of big boats and as bowman, so our role is always to say yes and consider that everything is possible. I arrived in the IMOCA class with that way of sailing. Rémi knows about offshore sailing. He is more cautious, more conservative.

“Thanks to our different approaches, we come together and find a consensus, allowing us to be more or less close to our own initial ideas. Decisions are always taken jointly. We talk things over, react and move forward with each other.

“We are both keen racers. We know how to pile on some positive pressure to get the boat moving, while avoiding any unnecessary risks.”

Another feature of the couple is they are always in a good mood. “We are lucky to be able to do this job, so we always sail with a smile. On board, we laugh a lot, even if we have made mistakes. We really enjoy it,” declared Giraud.

Aboard their IMOCA launched in 2006, designed by Farr, and which has been through a whole host of names (PRB, Akena Vérandas, Initiatives Coeur, Maître Coq), Clément Giraud and Rémi Beauvais are well aware that they will not be up there with the frontrunners.

“We do everything ourselves and only have a small budget,” stressed Giraud. “But we won’t be setting off with the handbrake on. The boat is well and truly ready and we fully intend to enjoy ourselves and have a good Transat Jacques Vabre. It would be great to finish in the first five of the non foilers. We know what we have to do to get a good result… “