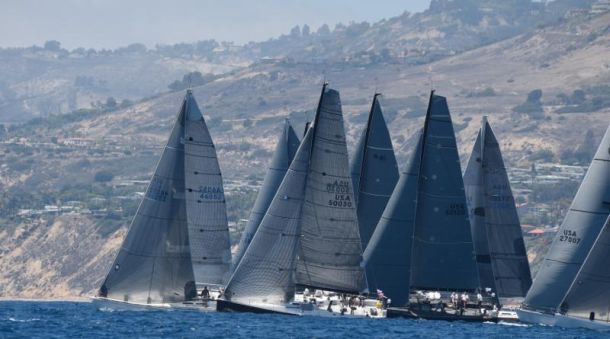 San Pedro, CA – A second wave of 18 entries in Divisions 4, 5 and 6 are now on their way west towards the finish at Diamond Head, 2225 miles away in the 48th edition of the LA-Honolulu Transpac. This biennial ocean racing classic is organized by the Transpacific YC.

The group's start today was in picture-perfect sunny skies and a building 10-15-knot seabreeze that had everyone so excited that a large pack of starters crowded the start line on final approach, with Bill Durant's and Jeff Shew's Santa Cruz 52
Relentless called back after the obligatory 2 minute delay specified in the Sailing Instructions.

Other than this hiccup, the second wave looks good to have a fast and clean break from the coast, at least until nightfall, when the wind may start to go into a lighter trend for the next 24-48 hours.

Unfortunately missing out on this fun is Jeff Urbina's Santa Cruz 52
Bodacious IV, who decided that due to the poor medical condition of two of their crew they had to withdraw from the race, reducing the Fabulous Fifties fleet in Division 5 to eight boats. Nonetheless the class will all teams fighting for the next week and more, with John Schulze's SC 50
Horizon a favorite for having won this class in past races.
Other boats to watch will be
Bob Pethick's Bretwalda 3
and Chris Hemans's Varuna, both Rogers 46 designs that will be part of a sub-class scored in the HPR ratting system devised for high-performance, offshore capable boats. The other boat in this sub-class for Division 4 is Greg Slyngstad's J/125
Hamachi.

Meanwhile the first wave of starters from Divisions 7 and 8 are still enjoying great conditions and are well on their way to Hawaii, with the leaders having completed nearly 25% of the course. Now averaging over 9 knots, Tracy Obert's 59-foot ketch Marjorie still leads in the standings both in Division 8 and overall, while Paul Stemler's J/44 Patriot is runner-up overall and leading Division 7. The tracks of this lead group have ceased going south and are starting to converge northwestwards back towards the rhumbline, indicating the breeze is also starting to rotate right for this fleet. Reports this morning confirmed this: skies were overcast, winds from 320° to 355° from 14-20 knots – conditions that had Steven Grinder's Jeanneau Sun Odyssey 45.2 Exit Strategy exclaiming in their report “Fun night!”

The sailing instructions require every entry to do a daily position report…after 4 days of not hearing from the smallest boat in the fleet, Yasuto Fuda's Feet 30 Fortissimo 11, the Race Committee decided to protest them. Even though the boat's tracker had been showing progress and race managers were never concerned, a protest was filed to emphasize the importance of this rule. Finally today Fortissimo did report in, and all is well.

And making good on their intent to set a multihull course record, Renault Laplanche and Ryan Breymaier's 105-foot trimaran Lending Club 2 set off yesterday afternoon just before 3:00 PM local time from Pt Fermin, and their tracker indicates them hurtling towards Hawaii at great speed. In the first 25 hours they have nearly caught the first wave fleet and are doing 31 knots towards the islands, well ahead of the average pace needed to set the course record.

Looking ahead, the weather for the weekend looks light and unsettled, with the possibility of some influence from a tropical depression heading northwest from the tropical waters off southern Mexico. But more likely the main feature will be the lighter forecasted breeze, which will have weather routers and navigators working hard before their start of the last wave of racers in Divisions 1, 2 3 and the Multihulls on Saturday, July 18th.

All boats have GPS trackers provided by Yellowbrick, where the boat's position, speed and heading will be continuously reported on the Yellowbrick website, with a 6 hour delay in the reports viewable at http://yb.tl/transpac2015. Official 0600 PDT position reports are reported by 0700 PDT each day, and about an hour later will be collated and ready for posting.