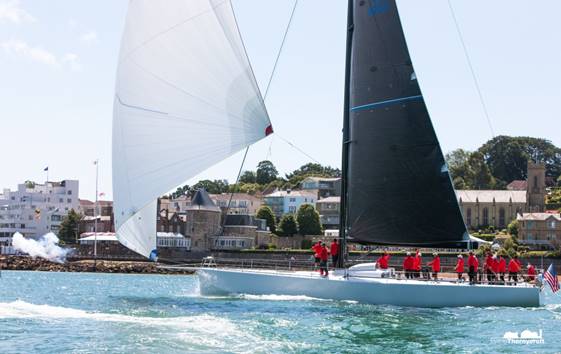 Approaching the end of the third week of the Transatlantic Race 2015 and following the arrival at The Lizard this morning at 09:06:37 EDT (13:06:37 UTC) of Constantin Claviez’s Swan 441 Charisma, the tally now stands at 28 finishers, two still at sea, and five boats retired.

Of this latter group three boats – Amhas, Shearwater and Solution – have all successfully now reached Horta in the Azores while the remaining two – Brigand and Altair – pulled out earlier in the race and limped back to Newport, R.I., with technical issues.

The two boats still racing are Paul Anstey and Craig Rastello’s C&C 41 Dizzy and the appropriately named Persevere, Colin Rath’s Hanse 55. This morning at 0700 EDT (1100 UTC) Dizzy had 184 miles to go and was making 6.7 knots while yesterday at 1600 EDT (2000 UTC), Persevere was still 418 miles from the finish line at The Lizard off southern England making 5.8 knots. Their ETAs at The Lizard were Saturday morning and Sunday afternoon, respectively, with Dizzy claiming the prize for the longest crossing this year having been among the first starters on June 28, while Persevere set sail with the second group three days later.

Last night Colin Rath reported: “We have a clear night for the first time in four days; it has been mostly drizzling rain previously.  We are steadily sailing at 10 knots. We fixed the problems with our B & G instrument system. The crew is in good spirits and looking forward to starting the Coastal Race since we spent the whole Transatlantic Race trying to catch our fleet to no avail. Now with the second race, we have a clean slate to start with and hopefully we will hit the tides right. Persevere has plenty of food and the watermaker has been working well. The crew is well showered.”

Sailing on board Persevere is the race’s youngest competitor, 14 year old Breana Rath, Colin’s daughter. “Breana has been enjoying the race and has improved greatly in driving and sail trim,” reports her father. “Her personal best is driving Persevere at 16 knots, surfing waves. The boat record for the trip is 18.6 knots.

“All in all it has been a good first crossing for Persevere and we look forward to the Rolex Fastnet Race to improve further with our amateur crew racing together for the first time.”

The curtain call for race participants will be the Transatlantic Race 2015 Awards Ceremony Dinner on July 24, hosted by the Royal Yacht Squadron at Cowes Castle on the Isle of Wight. The RYS is celebrating this year its Bicentenary with numerous events — including the International Regatta in which many of the Transatlantic Race participants are competing in the lead up to the Rolex Fastnet Race in August.