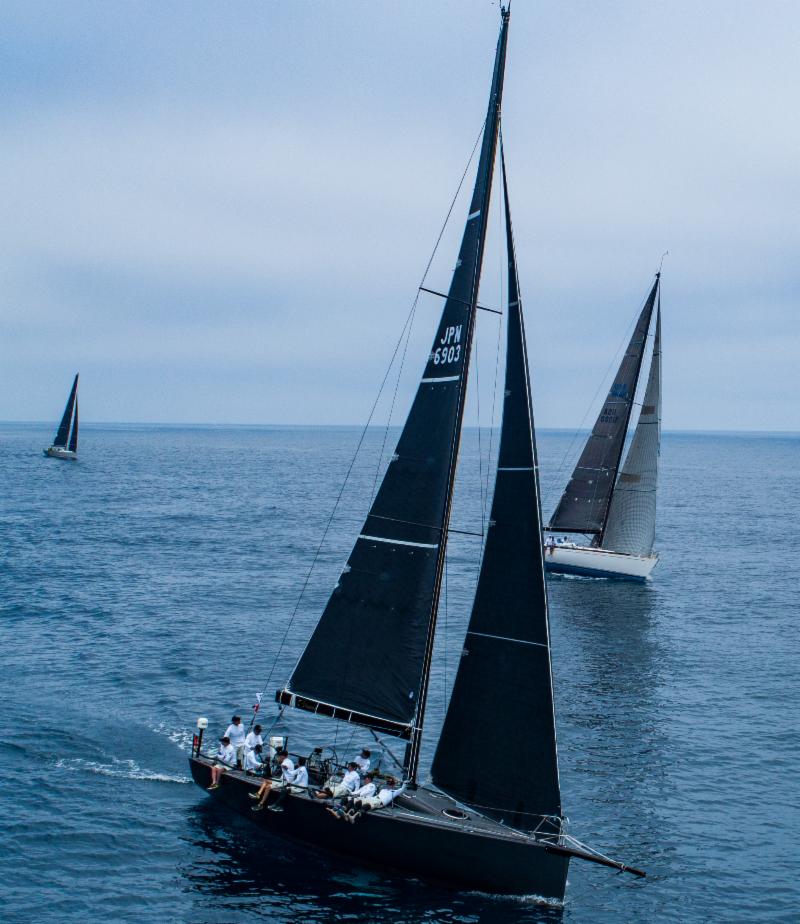 Draconis from Japan had a great start - Ronnie Simpson pic

Los Angeles, California: In gray but clearing skies and a light building sea breeze, the second wave of monohulls have left the start line at Point Fermin, to head to the Diamond Head, Honolulu finish line 2225 miles away in this year's 50th edition of the Transpacific Yacht Race.

Today 13 yachts in Division 3, 11 in Division 4 and 3 in Division 5 set off for their first mark of the course, the West End of Catalina Island, before heading southwest on tracks determined by their navigators to be the right balance between greater wind speed to the south versus shorter distance to the north.

Weather forecasts for the coming days suggest tracks that should sag south, but not quite as far south as the first wave was advised when they left on Wednesday afternoon. Wind angles and pressures look good for the next few days for this group.

Among the Wednesday starters there have been three teams who have encountered problems serious enough to turn back for the coast. The first was Mark Ashmore on his Cal 40, Nalu V, who reported: “Difficulties keeping bilge dry, pumps keeping ahead but reason for water ingress unknown, returning to port.”

Next was Kyle Vanderspek from his Hobie 33, Aloha, reporting rudder problems, and this morning another Hobie 33, Steve Eder's Mayhem, also suffered damage to the rudder. Both are returning to port at 4-5 knots of speed, and all aboard are safe and unhurt.

So far the division leaders are David Gorney's J/105, No Compromise in Division 8, no doubt because she is furthest north and thus sailing a track closest to the rhumbline. At 1700 PDT she was 136 miles north of Cecil and Alyson Rossi's Farr 57, Ho'okolohe, which is leading Division 6 and the entire fleet, in shortest distance to Hawaii, at 1807 miles.

Over the next 8-14 days the second wave fleet, plus the first wave that left on Wednesday will face all the pros and cons inherent to ocean racing. The weather will get warmer and the wind will go aft a little more every day.

For the next few days, as faster boats start overtaking the slower boats, there will be the occasional thrill of a visual contact made with a running light at night, a silhouette at dawn, or a sail plan seen just on the horizon.

Celestra reported this morning: “Flying a Code 0 and main. Things have been a bit difficult on Celestra. First my steak was overdone after I specifically asked for medium rare, and then our projector bulb went out. So much for movie night (and people said it would be easy on a cruising catamaran).

“Overall, the sailing is good, with a consistent 15-18 knots true wind with 3-4 foot waves. However, we all wish we knew what to do with these large white clothes flapping in the wind. The thing that makes this somewhat bearable is ice cream sandwiches and the fact that we are crossing an ocean as part of the Transpac.”

Another of one of the smallest boats in the fleet is being sailed double-handed by Charles Devanneaux and Fred Courouble on the former’s new Figaro 3, A Fond Le Girafon.

Devanneaux commented, “Cold and still wet outside – a bit of drizzle. Seems like home in Brittany, waiting for the sun to dry the boat and jackets. Let's get Mai-Tai's ready.”

More information, including the race and its history: https://2019.transpacyc.com