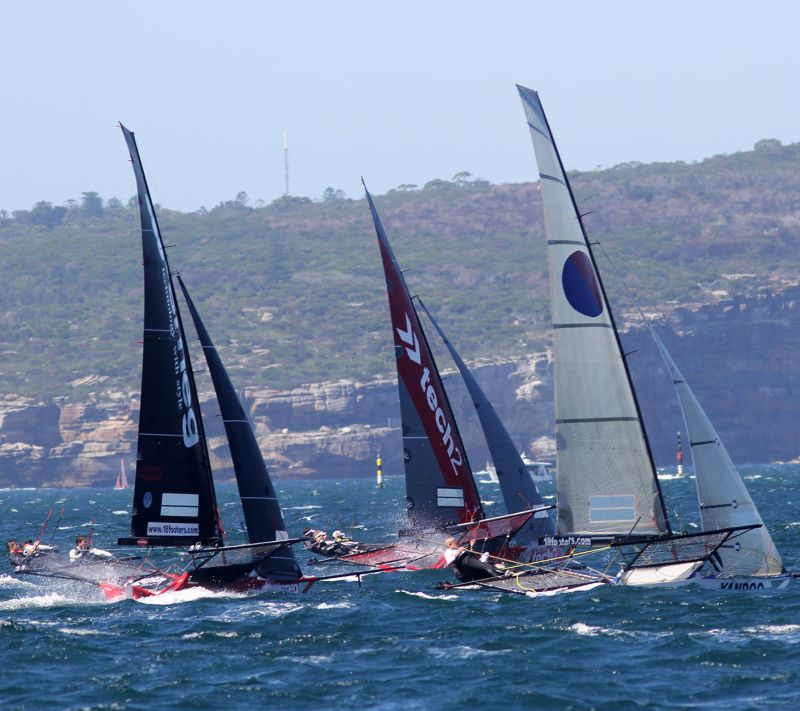 Battle to the top mark

25/01/2021
The recently crowned NSW champion tech2 18ft Skiff team totally dominated a great day's racing in races 2 and 3 of the Australian 18ft Skiff Championship on Sydney Harbour today.
In North East winds ranging from 18-25 knots, the tech2 team of Jack Macartney, Charlie Wyatt and Lewis Brake, was brilliant and now has a record of three wins from the three races sailed so far in the championship.
The highly-rated Smeg team of Michael Coxon, Ricky Bridge and Trent Barnabas pushed tech2 to the limit in the early race today but, after leading narrowly at the first windward mark, was unable to hold back the powerful tech2 challenge.
That said the racing between the two champion crews was sensational and had the spectators cheering for more as the skiffs became airborne on the wild spinnaker runs.
tech2 won today's first race (Race 2 of the championship) by just 15s from Smeg.  Finport Finance (Keagan York, Matt Stenta, Phil Marshall) was a further 1m6s back in third place, followed by Andoo (Steve Thomas), Noakesailing (Sean Langman) and Winning Group (John Winning Jr.).
In the latter race, which was sailed in a freshening breeze, tech2's winning margin over Smeg was 35s. Andoo (Steve Thomas, Cam Gundy, Rhys Mara) was a further 11s back in third place, followed by Noakesailing, Finport Finance and Shaw and Partners Financial Services (Jim Colley).
The race to the first windward mark in the early race was tight as five or six skiffs battled for the lead throughout the leg.
Smeg won that part of the race to lead by 10s from tech2, Noakesailing, Winning Group, Finport Finance and Andoo, but a checkered run for the Smeg team and tech2's downwind speed was enough for her to grab a narrow 5s lead from Smeg at the bottom mark.
The pair raced with little between them on the next windward leg with tech2 edging her lead out to 15s as the fleet headed back to the finish line.  Boat speed for the two skiffs was equal and the winning margin remained at 15s.
Racing was even better in the later race and produced incredible action as the skiffs sped at top speed ahead of the 25-knot Nor'Easter.
Noakesailing led the fleet during the first windward leg but eventually it was the tech2 team which again held the lead by 15s as the fleet headed downwind back to the bottom mark.
tech2 had increased her lead but the battle for second place was intense as there was little between Andoo, Smeg, Finport Finance, Noakesailing, Shaw and Partners Financial Services and Yandoo (John Winning).
On the final windward leg of the two lap course, tech2 was superb as she opened up a lead over 55s over Smeg, followed by Andoo, Finport Finance, Noakesailing and Shaw and Partners.
The leading six placings remained unchanged on the run to the finish but a slight wind shift allowed the challenging teams to reduce the winners margin.
At the end of the day's racing, tech2 leads the points table on three points, followed by Smeg on six, Noakesailing on 12, Andoo and Finport Finance are equal on 14, and Winning Group is in sixth place on 17 points.
Races 4 and 5 of the Australian Championship, will be conducted next Sunday (January 24). Spectators can follow the racing on board the club's spectator ferry, however due to the COVID-19 policy, numbers are limited.  Booking online through the club's website www.18footers.com is essential. https://www.18footers.com.au/18-footers-sailing/spectator-ferry/
For those unable to make it out onto the water, the club's live broadcast team will be on Sydney Harbour to capture all the action.  Live streaming is available at www.18footers.com by clicking on the '18 Footers TV' link.
– Frank Quealey, Australian 18 Footers League