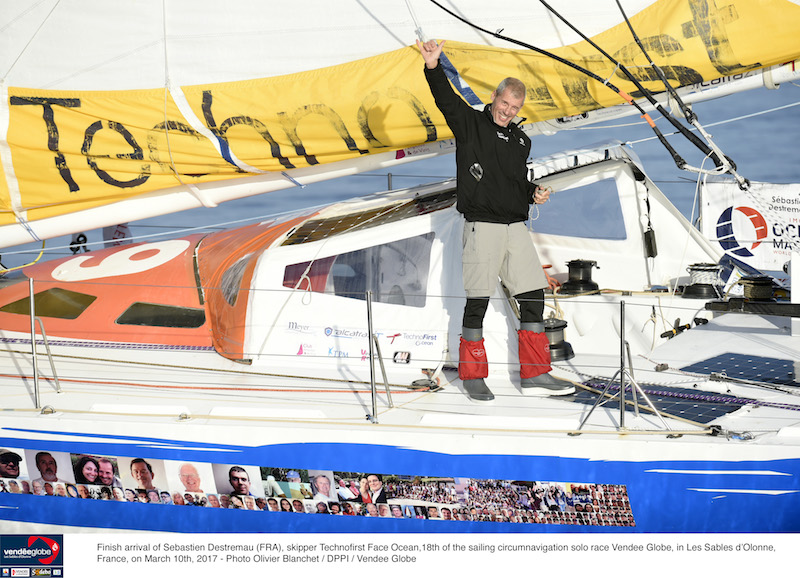 The skipper from Toulon is the final competitor to complete this eighth edition of the non-stop solo round the world race. The curtain falls on the 2016-2017 Vendée Globe fifty days after the winner, Armel Le Cléac'h (Banque Populaire VIII), who finished on 19th January.

Although born in Brittany 52 years ago, Sébastien Destremau is now based in Toulon. After an Olympic preparation in the Flying Dutchman class, he took part in several major crewed races, such as the Volvo Ocean Race and the Sydney–Hobart. He later became a consultant, setting up a video magazine covering race news. It was in 2015 that the skipper acquired the Imoca 60 TechnoFirst-faceOcean built in 1998, which had already clocked up two Vendée Globe races – firstly with Josh Hall (9th in 2000-2001) and then with Steve White (8th in 2008-2009). After a delivery trip from Cape Town to Toulon, Sébastien Destremau qualified for the round the world race by competing in the Calero Solo Transat, between Lanzarote and Newport, Rhode Island. Before the start, the French skipper described his boat as being “ultra simple, like a bicycle without gears”.

This inability to step up the speed was confirmed very early on in the race, when the skipper, whose only goal was to complete the round the world voyage, found himself at the rear of the fleet. He would attempt to take a short cut close to the coast of Africa, but to no avail. In the third week of racing, his starter motor failed and following in the footsteps of Michel Desjoyeaux, he was forced to come up with an alternative method to start his engine to fill his ballast tanks, using a rope and sail power. Destremau was successful in his makeshift technique, but the method was time consuming.

As he approached the first of the three major capes, Good Hope, the French skipper was joined by Catalan skipper, Didac Costa (OnePlanet- OneOcean). The Spaniard, who had set sail four days after returning to the port of Les Sables d'Olonne after problems with his electronics, soon made his getaway ahead of TechnoFirst-faceOcean, which passed the longitude of the Cape of Good Hope on 11th December.

Destremau would set off across the Indian Ocean close to Romain Attanasio, who had been forced to sail to South Africa to carry out repairs. By Cape Leeuwin they were joined by Dutch skipper Pieter Heerema bringing up the rear of the eighth Vendée Globe to the south of Australia.

In strong winds, Destremau, who felt no real pressure on him, was quite happy to reduce the sail. “Of course, we're not as quick, but we may go much further than some.” It was in the Southern Ocean that Destremau fully understood what he was accomplishing. “I can hardly believe it. We are just normal guys, but we're doing something superhuman.” He was also well aware of the dangers of finding himself alone in the middle of the Pacific and so decided to carry out a thorough check with a pit stop off Tasmania from 3rd to 6th January. When he set sail again, he was almost a thousand miles behind Pieter Heerema.

When Sébastien Destremau finally left the Southern Ocean, rounding Cape Horn on 29th January, the first six boats had already finished the round the world voyage. As he sailed up the coast of Argentina, 17th placed Pieter Heerema was some 1200 miles ahead. The climb back up the South Atlantic would take three weeks with Destremau finally returning to the Northern Hemisphere on 19th February, but the voyage was far from over, as it would take just under three weeks more to sail from the Equator to the finish line off Les Sables d'Olonne.

During the final fortnight of racing, it was the lack of food that become a worry for the skipper of TechnoFirst-faceOcean. He had to ration himself to one meal a day and his attempts at fishing off the Azores were not enough to provide him with enough food.

First impressions
“The Vendée Globe is something for people with mental problems! There is the enormous pressure on you to finish that you feel day and night. Because it can come to an end at any moment. Then, there are the occasional difficulties, which are extremely difficult, but that you can deal with. There is the fact that you're alone. That can cause you to feel certain emotions. Things that you don't feel elsewhere, maybe because you don't allow yourself to feel. When you're alone on a boat, you can do what you want. You can sing if you want or cry if you feel like it. I cried every day between the Cape of Good Hope and Cape Horn. However long the race lasts, you have to deal with everything with what you have with you. You don't have the choice. You have to find the solution. The starter, the alternator belt… You make do with what you have on board. If not, you have to turn back. Consequently, you find an inner strength to do things. I'm not a good mechanic. I'm not good at much. But I managed to repair things when I had to. I don't know how I managed to do it. I'm not someone who likes being alone. I never really wanted to do any solo sailing. But it was the difficulty of the Vendée Globe that was my motivation. This is a huge victory for me. The Vendée Globe is something you win or you finish and finishing is for me a victory. Armel finished fifty days before me. I didn't sail that well, I suppose… (laughs) But I did do better than those that didn't finish. The race itself is only a small part of the adventure. The Vendée Globe for us is not four months, but four years of everything that has to be done before. So today, I am extremely proud.”

Seeing the crowds
“It was four years and four months ago that I decide to do the Vendée Globe after watching the start. All I wanted to do was make it all the way around. The emotion in the channel was incredible. I thought there may be some people, but seeing all these people, it's amazing. I don't know how many people were there. Tens of thousands. Many were there because it was the Vendée Globe, but you say all these people here for me… The Vendée Globe is much more than a race. It's an adventure. Thousands of people come here to watch the final boat arrive. I felt the same emotion here as I did in the Southern Ocean. Even if there are cameras, you can't stop the tears welling up. In the South, you just let yourself go. When you set off you share the experience with others. People here with banners for me, it's just crazy. It's a miracle that I have finished the Vendée Globe, although in fact it's not complicated sailing from point A to point B. It's more complicated winning it. It's true you go into unknown waters, but lots of people know how to sail.”

No choice but to cope
“For me there was the discovery that you have to face things. You just continue, as you don't have the choice. If there was a race tomorrow, I'd set off again. In four years from now? That's a long time. You feel fear, joy and that's what pushes you. It is a privilege. It's not a question of holding on. It's quite simply that you don't have the choice. For example, if you set off with one spanner and it breaks. You can't go and buy another one. All you have is what you have on board. You find what you need – technical, mental, physical. I was going to tell my mother I would bring the boat into Fremantle, but when you're in your bunk with cracked ribs. You crawl up on the deck. You're on your knees. But then you get back up. When you have broken ribs, that hurts, but you don't have the choice. You simply have to do that.”

Adventurer rather than racer
“I'm the last one to finish. Well done to the winner. That was an incredible performance from Armel and from Alex. People come here to support the adventurer rather than the sportsman. I didn't treat this Vendée Globe as a race but as an adventure to share with others. I wouldn't have bought this boat if I was aiming to win the Vendée Globe. My goal was to finish the Vendée Globe. Some think it is a race. It is, but it is also something that we share with the public. Eight skippers have finished first. Eight second and so on up to eight finishing sixth, but I'm the first skipper to finish eighteenth!”

A complicated finish
“24 hours from the finish I could see that it was complicated arriving and entering the harbour. But in the end everything slotted into place. Finishing at night adds something magical. It also allows a break between the finish and the entrance into the harbour. Two hours before finishing I got delayed by a net getting caught up. The boat had been making progress, but then she slowed down and I could hear a noise from the hull. It was pitch black outside, so I had to face the wind and go backwards and fortunately it came away. Crossing the finish is too quick. It's suddenly over.”

9000 miles behind the winner
“For me, it's a bit like a candidate in the elections getting 0.02% and saying ‘we're on our way'. For me, being the first person to finish in 18th place is a bit like that. I was really pleased to see I was 9000 miles from the finish when Armel won the race. The equivalent of three transatlantic races. I laughed about it, but also realised I had a long way to go. Then, I said I had never averaged more than 15 knots on this boat, while a foiler keeps up averages of 25 knots. Armel wasn't that good if you look at it like that (laughs).”

Closing the Vendée Globe
“I made a key to close the door behind me in the Pacific and now I have another one to close the harbour entrance, as I'm the last one here in Les Sables d'Olonne. When you're out there alone, you know that there are four men there watching you around the clock (the Race Directors – editor). When something happened in the Pacific, ten minutes later the phone was ringing. They kept ringing me. I had an e-mail saying “we're not worried but… Can you confirm that everything is fine?” They deserve to be applauded, because when you think you're completely alone in the Pacific, they're there.”

The curtain falls on the 2016-2017 race
“The President of the SAEM Vendée, Yves Auvinet was also present on the podium this afternoon to thank all the skippers, teams and partners and declared, “The Vendée Globe will be back in 2020 and I hope with the same spirit as this time. This was a fantastic edition in terms of the race and in terms of the number of people here for the finish. The prize-giving ceremony will take place on 13th May in Les Sables d'Olonne.”