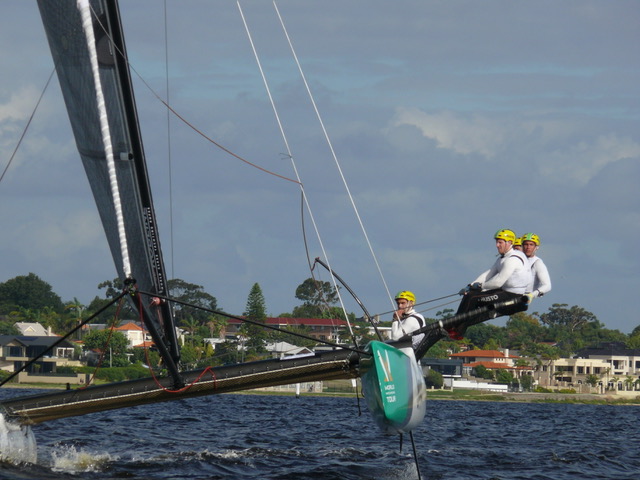 Local skipper Matt Jerwood showed he is more than a match racer on Perth’s Swan River today, winning four out of five fleet races in the M32 Australian Series inaugural event. With his regular Redline Racing crew, he dominated the first day of racing, with his only slip from the top spot a third in race three.

Commenting on why he is sailing in this event, he said, “The fleet racing within the match racing event is very important to set you up in your seeding, so it’s not always been our strong point, but it’s definitely been one of the more fun things to do.”

The Redline Racing Team are one of two professional teams mixing it with some amateur skippers, some of whom are sailing the M32 for the first time, but most are being helped by pro crews. Sweden’s Mans Holmberg and his crew are also taking advantage of the opportunity to get time in the boats before the World Match Racing Tour championship level event next week.

With the professional teams holding the top two spots after the first day, the best of the amateurs is Matt Allen’s Team Ichi Ban, with the president of Australian Sailing being assisted by pro sailor Evan Walker and his team.

For Matt Allen, one of Australia’s legendary offshore skippers, with many Sydney to Hobart Races under his belt, this was a first time experience racing multi-hulls, but he came ashore with a big grin at the end of the day commenting simply, “How good was that? Awesome!”

Conditions on the Swan River were challenging enough to keep the teams on their toes, and producing some very fast and very close racing. Gusts of up to 20 knots swept across the course at times, but did not generate waves big enough to cause any problems.

The event is hosted by Mounts Bay Sailing Club, and finishes on Wednesday. The weather forecast for Tuesday threatens winds of up to 25 knots.