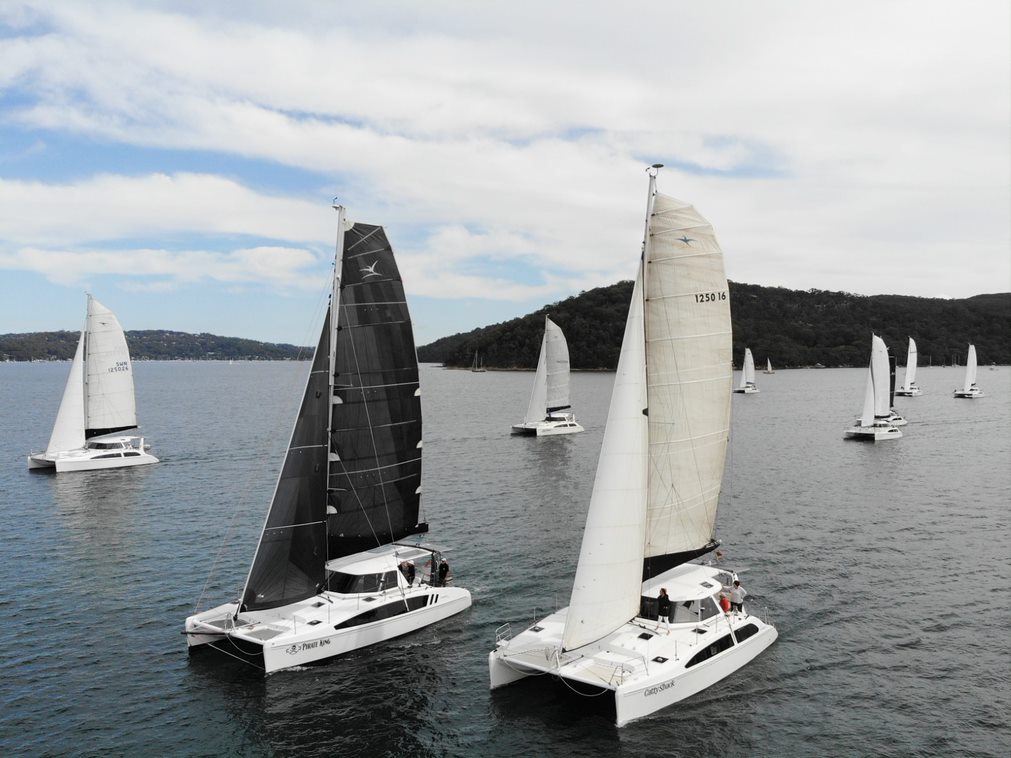 October 30 and 31st, Multihull Central hosted the 21st Seawind owners regatta on Pittwater, just north of Sydney Harbour. This year's regatta came together in the last minute just as COVID-19 restrictions lifted a little in Australia allowing for group events. What followed was two days of close racing among 14 catamarans and fantastic parties both on and off the water in good fun and good humour.

The event has been running for more than 20 years now and is a great opportunity to test and practice sailing skills, meet other boat owners and enjoy the beauty of Pittwater and Broken Bay, which is about a day sail from Sydney.

This year, the boats met at the Basin on Friday afternoon with the first race a shorter course to warm up and test the race committee's handicaps. Seawind 1250 Renaissance took line honours. Following racing the crew came together on the beach at the Basin to compete in the infamous blind dinghy race followed by sundowners.

On Saturday there were two races that extended through the full length of Pittwater, the first of which got away in pretty light winds, which made for some close but unpredictable racing amongst the fleet. Seawind 1250 Whisky Business took out line honours.

Then the fleet rafted up and took moorings for lunch onboard and a quick swim in Towler's Bay. The second race got underway in fresher breeze with storm clouds looming as Sydney got pelted with hail. After a close race and some breakages onboard Whisky Business and Double Vision, the Seawind 1250 'Catty Shack' came through for a win.

Luckily all racing was virtually completed before a deluge of rain fell as the last boat crossed the line and the heavens opened. All the boats got back safely to the Royal Motor yacht club who accommodated many of the boats on their terrific marina facility.

After a few sundowners at the dock, we moved inside for dinner out of the rain in the club with a beautiful meal. The Halloween themed party brought out some of the best and the worst costumes, with prizes also given for best carved lanterns.

Congratulations to the overall winners: Seawind 1250 Seatwist in first, Seawind 1250 Cattyshack in Second, and Seawind 1160 Location in third.

Thank you to sponsors Seawind Catamarans, Survitech, Club Marine, Tempo Spars and Rainman. Planning is already underway for next year with dates set for the 8th and 9th of October 2021.

For the video and full photos visit https://www.multihullcentral.com/seawind-2020-seawind-pittwater-regatta/