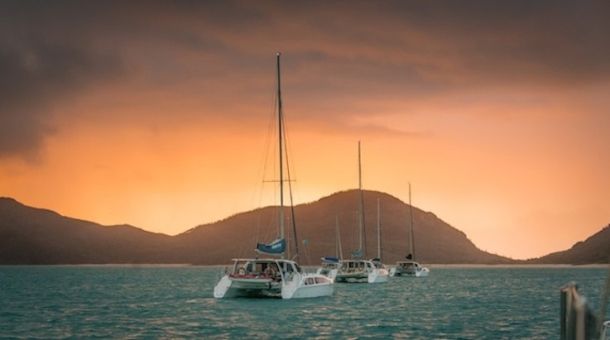 The 9th annual Seawind Whitsunday Rally, hosted by Multihull Central last week, saw over half a dozen catamarans and thirty crew enjoy island hopping around the beautiful Whitsunday Islands for a week of social racing, sundowners plus onshore and offshore parties.

A meet the fleet dinner at Abell Point Marina'�s Sorrento restaurant kicked off the event and had a gathering of the Seawind family, with old and new friends catching up, as crews prepared to set sail for their first destination come morning.

The fleet of Seawind owners and charterers sailed to a total of seven destinations including from Airlie Beach, to Cid Harbour, Shaw Island, Whitehaven Beach, Hook Island, South Molle Island and finishing at Hamilton Island, with points given for their sailing results.

However the onshore activities were just as important as the sailing performance, with points given for best sand sculptures, blind-man dinghy races and beach cricket to name a few. Each day ending with snorkeling, sundowners and onboard dinners.

The presentation dinner on the Friday evening had everyone share their experiences with great camaraderie amongst the group. The final and all-important prize, a luxurious day spa treatment at Hamilton Island, was awarded to David Stratton and his partner Georgina Gibson, owners of the winning Seawind 1160 Nimrod.

Multihull Central�s Event Coordinator and first time attendee Lisa Kidd comments, �It�s easy to see why we have customers sailing their boats up from as far south as Sydney for the event and entering year after year,� Lisa said, �This is a great location and it�s a great way to experience cruising and learn how to sail a catamaran�.

A Seawind 1250 was chartered for the event by Multihull Central, with two cabins rented out to customers and providing onboard coaching throughout the week by Multihull Central staff. Other chaterers are also encouraged to rent a Seawind and join the event to get experience and learn from other Seawind owners.