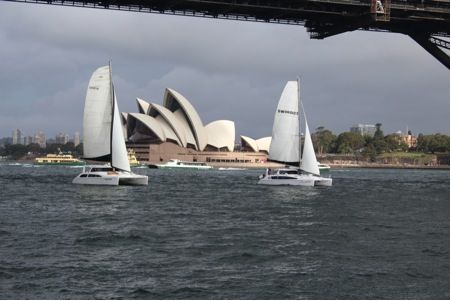 A fleet of Seawind catamarans and other multihulls enjoyed a weekend of fun racing, waterside partying and dining surrounded by the spectacular sights of Sydney Harbour at a rally hosted by Multihull Central on the 27th and 28th of October.

The flotilla consisted of ten Seawinds, a Corsair trimaran, a Schionning, and GBE completed the fleet, with an Aquila 44 powercat hosting media.

“This is one of the best events we have held for years,” said Brent Vaughan, Director of Multihull Central, “Thanks to our Seawind Club members getting involved and making it a real social occasion as much as a sailing event.

“We tried to tailor the event to bring newly initiated boat owners together with really experienced sailors who all share a common love of their boats and a passion for the adventure on the sea.”

On Friday, the event kicked off with ‘How to trim sails on a multihull’ workshop that was hosted by Multihull Central’s very own Peter Backhouse who, with his team, commission new boat deliveries. The class was well attended by all skippers and suitable for all experience levels.

Following the class, the fleet then hit the harbour with a robust sail enjoying 20-25 knot winds, followed by waterfront party with catering supplied by Franco’s mobile woodfired pizza on the at Multihull Central’s marina headquarters.

Once the sun went down and several cocktails later, a screening of the SEAbbatical Film Festival that débuted at Sanctuary Cove International Boat Show this year was projected onto an outdoor cinema screen providing some inspiration for aspiring cruisers.  The film festival consists of seven 8 minute movies made by those that have taken a SEAbbatical to sail in various places from Antarctic to Borneo – amazing to sit back on a balmy Sydney evening and watch.

Saturday morning started with a hearty egg and bacon breakfast then back off to the harbour for a day of glorious sailing.

After a dash around the harbour, the fleet then rafted up at Atholl Bay near Taronga Zoo for a social dine around lunch seafood, salad and ice cold drinks.

Following lunch, the skippers and a first mate congregated on the beach to contest the ‘Blind mans Dinghy race’.  Each of the rowers had blindfolds on, and the navigators had to give them directions to round a strategically placed buoy.  Naturally, chaos ensued much to the delight of onlookers and rest of the fleet.

Then following one last fun race up the harbor in the late afternoon, the flotilla regrouped at Multihulll Central and completing the evening with an award giving ceremony over a three course gourmet dinner at the Tramsheds located nearby.

The Multihull Central award for best and the fairest went to Lynne on Seawind 1250 Cattyshack.

Other novelty awards were also given including one to David and Coleen Downs for their inspirational four year journey circumnavigating Australia onboard their Seawind 1160 with a stopover in Sydney to join the rally.