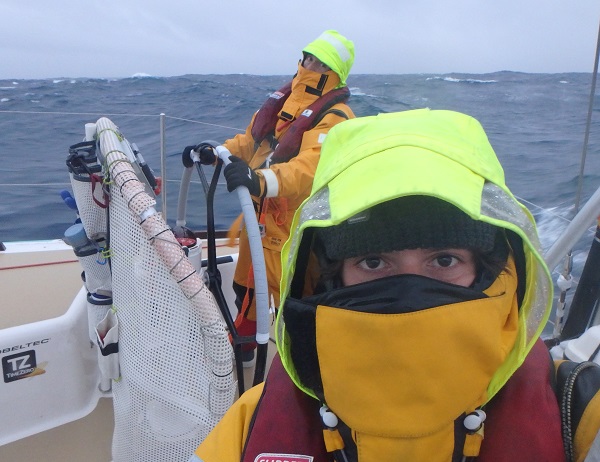 The latest depression has the most westerly boats in its grip and is moving steadily east this morning in the closing week of the Seattle Pacific Challenge. The Race Office estimates that leader Derry~Londonderry~Doire is around four days from the Emerald City, with just over 850 nautical miles to the finish line (as at 0800UTC), having opened up its lead over LMAX Exchange to more than 135 nautical Miles.

Unicef is around 11 nautical miles further behind, and closing, and has also opened up its lead on ClipperTelemed+ to more than 30nM. Less than 15nM further back is GREAT Britain which traded places overnight with Garmin as both teams tacked their way across the Pacific.

The latest storm is repeating the cycle of ridges of high pressure sandwiched between low pressure systems, described yesterday by Clipper Race meteorologist Simon Rowel as the ‘North Pacific Railway’. There appears to be no respite from this relentless rhythm for the battle weary crew as they continue to fight their way towards Seattle but the end is in sight.

The countdown to Seattle has started and the provisional ETAs released by the Race Office yesterday indicate the fleet is on schedule to arrive within the original window of 15-20 April.

The latest storm should not be as fierce as previous systems according to Simon Rowell’s forecast today. He says: “The front associated with this one doesn’t look as if it packs quite as big a punch as the last one, but it’s still (gusting) well into the 50s and maybe even the low 60s at times.  After this one goes past conditions look much better for progress, with good generally westerly flow for several days.”

The fleet is spread out over 850 nautical miles with back marker IchorCoal making up some ground overnight, around 170nM behind Da Nang – Viet Nam. Both now feeling the effects of the latest storm. Skipper Darren Ladd reports: “The second low is upon us, so once again the wind has caught up with our sail plan. Boat speed is up into double figures and the good ship IchorCoal has hitched up her skirt and is making a dash towards The West Coast. Dare we dream of Seattle? Well maybe it's still a little early.”

Da Nang – Viet Nam skipper Wendo Tuck adds: “The first reef has just gone in, we are starting our heavy wind prep, next will be the Ginger Ninja plugged in ready to go…Hoping this next one (Low) isn’t too nasty but sends us on our merry way.”

‘Home’ team Visit Seattle is now less than 1450nM from the finish in ninth place with PSP Logistics around 40nM behind in tenth. Mid-fleet Qingdao is in eighth just over 100nM behind Mission Performance.

Garmin skipper Ash Skett is preparing for the next Low to reach them: “Currently we are riding a developing ridge of high pressure which means westerly wind…sailing deep downwind. It has also bought with it more settled conditions and clear skies at last. Although it is still very cold, the sunny days, emerging moon and starry nights are very welcome sights.

“The next bit of weather after this ridge passes over is a well-established low pressure, which should back the wind around to the South and eventually give us a nice windy reach, on target, towards Seattle via the Ocean Sprint.”

There are two bonus points up for grabs in the Ocean Sprint which starts later today just 120nM ahead of Derry~Londonderry~Doire, although the result will not be known until all the teams have completed the sprint course.

Skipper Daniel Smith is far from complacent: “The results of the ocean sprint and final race results will have some degree of luck involved. With High pressure sitting over the land, and some lighter variable winds between of us and the finish, it looks like the boat which picks the best line, or gets a lucky break, will be victorious.”

The fleet has received details of the activities planned for Seattle which has been a distraction from the weather and focussed minds on the events that await them ashore. Many are looking forward to the Visit Seattle skipper Huw having first pitch at a Mariners’ baseball game.

For those of you in the UK, Europe, Middle East and Africa there’s another chance to see episode two of ‘Race of Their Lives’ on Bloomberg TV today at 1100UTC/1200BST/1300CET which covers Races 2 and 3 in the current series. It includes time with the crew of IchorCoal crossing the South Atlantic to Cape Town in South Africa and on Garmin in the Southern Ocean. (Bloomberg TV can be seen in the UK on Sky channel 502; Virgin Media channel 609, Freesat channel 208 and live online here)

Episode 3 which was released last weekend is also being screened on a range of channels. Including Fox Sports in Europe and Africa starting on Monday 11 April at 1400UTC with a number of repeats including next Sunday 17 April at 1600UTC. In Australia Fox Sports 3 will broadcast it this Wednesday 13 April at 1500 on the East Coast with a number of repeats. It will also start airing on the Nautical Channel on a wide range of global TV networks from Sunday 17 April. Please check local listings as times may vary.

Stay tuned to the RaceViewer to follow all the action.

All positions correct as of 0800 UTC.