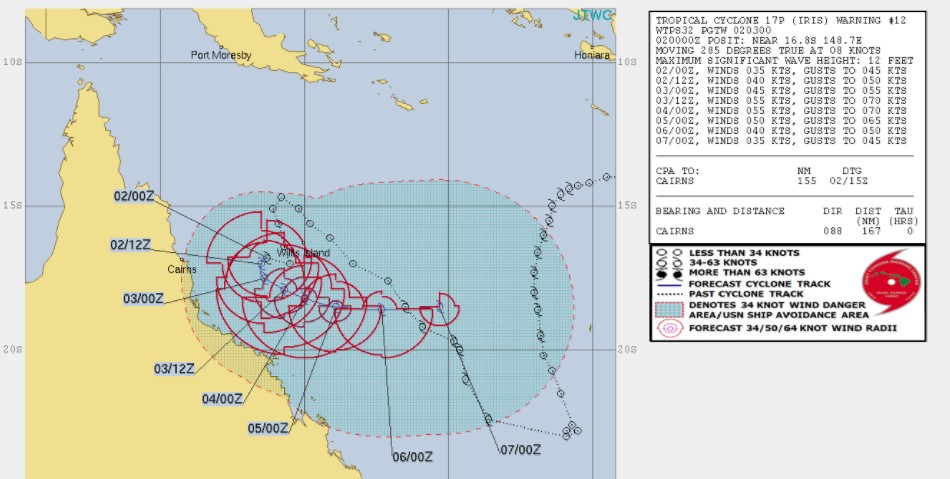 The path of TC Iris.

Searching for a Cyclone

Fleet Weather Officers and Duty Race Directors have been very busy during this race with 3 of 4 starts delayed and several weather events, including Tropical Cyclone Iris which resulted is racing being suspended. The Fleet Weather Officers commenced tracking a deepening Tropical Low which was initially upgraded/classified as Category 1 Tropical Cyclone Iris by the Fiji Meteorological Service, then subsequently downgraded, then upgraded again by Australian Bureau of Meteorology to a Category 3 Cyclone, a few weeks later.

Searching for a Cyclone, by Fleet Weather Officer Robin Hewitt

There have been instances of tropical revolving storms occurring in the history of the Melbourne to Osaka Race, in each case as typhoons in the Northern Hemisphere. First race of 1987 saw some yachts anchoring in shelter for up to four days, while the 1991 race had super typhoon Walt formed near Guam, necessitating some course selection. In the 2003 race some yachts were obliged to shelter in Ulul lagoon (Onoun Island, Southwest corner of the Namonuito Atoll, Federated States of Micronesia) as a typhoon neared.

In the race management team for the 2018 event, Robin Hewitt and Andrew Roberts have shared the task of providing warnings of extreme events. What are the possibilities? Tropical Revolving storms in the area of interest are known as Cyclones in the southern hemisphere and Typhoons in the northern hemisphere. In addition, the spring season in Japan is subject to the storms sweeping in from icy Siberian land masses. The polar jets can intensify these Lows to bring severe weather to competitors as they near Japan. Similarly, cold fronts and deep Lows can escape from Antarctica but in March are unusual, more likely is a cyclone over northern WA crossing land and re-appearing near Perth before joining a front thence heading towards or below Tasmania.

So how to prepare to manage a race through the tropics? Methodology is standard-collect data-analyse-prepare hypothesis. First of all, the race is timed for the least climatic possibility of tropical revolving storms. The period of April and either side has the lowest incidence historically. So firstly a table of occurrences was prepared for the times of interest. Then they are compared to the theoretical model for possible variations. Formation does not occur between 5ᴼN & 5ᴼS and mostly do not form between 10ᴼN & 10ᴼS.

Read the full story, with weather maps, charts and historical cyclone data, at the ORCV website.