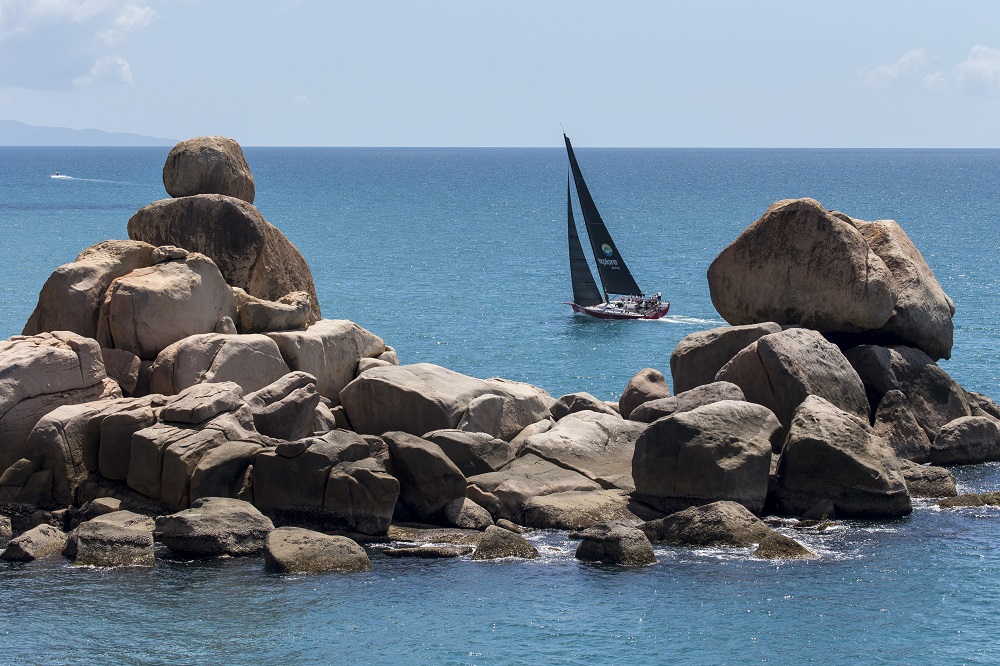 In their first showing at SeaLink Magnetic Island Race Week, David Fuller’s Vamp has won the Around the Island Race from Miss Scarlet and two-time Sydney Hobart winner, Balance, once again avoiding all the holes in the course that the others fell into on Day 3 of the Townsville Yacht Club hosted regatta.

Vamp, from NSW, won by over 10 minutes and in doing so, has won IRC Racing with a day to spare. “Don’t worry, we’ll be back on the course tomorrow,” Fuller said, thrilled having won three of the four races sailed.

“They both fell into a hole off Middle Reef and we passed both of them. The weather gods are on our side. Miss Scarlet took line honours and Balance pipped us on the line,” Fuller said of Paul Clitheroe’s TP52 crossing just 14 seconds in front of his Corby 49.

“It was a really nice race,” he said of the beautiful conditions that finally came through well after the planned 11am start, when racing was once again delayed.

“I love it here – it’s been a pleasant surprise – I’m so glad I’ve done it,” said Fuller who made the decision to be here for the first time in his 75th year.

Meanwhile, Miss Scarlet, a Kiwi entry that recently took line honours in the Groupama Race, missed the start, throwing up a kite to get there. “Tactician’s fault, but he redeemed himself by picking all the shifts right,” skipper Graeme Wilson said.

“We took off in the breeze transition and in the end, beat Balance home by three minutes. I feel for them, they fell into a hole again. It was a lovely sail around the Island though. I’m hoping we get the promised breeze tomorrow and then we’ll have a crack at it,” Wilson said, referring to the fact they have come close, but been caught each race between the other two yachts.

Division 1 went to Kenny Bruce’s Moo from David Perkins’ Vanilla 2 (Vic). In winning the race, Moo, an X562 design from Queensland, also takes control of the Division 1 pointscore, but is on equal points with Paul Ley’s well-sailed Kaufman 58, Pilgrim. Tomorrow will be the decider.

The rest of the fleet undertook a shorter race on the bay on two separate courses. Spinnaker Divisions 2 and 4, along with the multis, were on one course, the remainder on another.

Yachties love their snakes – the lolly version that is. Today, the multihull Mistress was missing one of its four crew members.

“My son Nathan,” Mistress’ owner Dennis Coleman confessed straight-faced. “I sold him to Mayfair (James Irvine’s Beneteau First 40) for a bag of snakes. On a hot day they provide that sugar hit and they are easy to carry on a boat and eat.”

Maybe Coleman shouldn’t have done that – they finished fifth today and gave away their top spot in the Multihull division to the women on Ave Gitana.

“We didn’t go as well today upwind. It’s (Mistress, his Corsair Sprint Mk1 design) hard work in breeze. It doesn’t like choppy water, but we’ve had our share of nice days and we’re happy with our day’s sail,” Coleman, from Townsville said.

“It’s like a little go-cart, my boat, it’s easy to manoeuvre and we’ve been happy with all our starts. We always sail to capacity – we don’t worry about sailing to our handicap. We give the boat the best chance to win.”

In contrast, John ‘Willo’ Williams enjoyed the day’s sail. His and Bruce Kellermann’s Tyee III from Victoria, is a rather large Catana 431 multihull. They finished second to Graeme Etherton’s ‘The Boat’, a Crowther Windspeed 32 cat.

A man of few words, “Quite good,” was how Willo described their day. The crew worked hard, the kites went up and down. We gave every sail in the wardrobe a full workout.”

Kellermann added: “I’ve been frizzing my brain trying to keep the boat moving in the previous day’s races, so today was good.”

On Privilege, owner Peter Strain was pleased with third place: “This boat’s never failed me, she’s totally reliable,” he said of the French designed Privilege 465.

“It was better for us today, we’re a big cruising multi – but we’re fortunate to have finished all the races, despite the light weather before,” said Strain, who races against Melbourne club mates Willo and Kellermann when the opportunity arises.

Nev Edwards and his crew on Nauti-I-Lass-Too (Qld) are pretty pleased with themselves. Their sixth place today aboard Edwards’ Sawbridge design has kept them in the lead of Division 3, and with the breeze up, Edwards said, “Beautiful – nice – great when the wind kicked in.

“We missed the start by a minute and had to play catch up,’ he said, blaming their 66 year-old bowman, Garry ‘Sort’ Rodgers. We got better as the day wore on. Local knowledge paid today, and we didn’t have that. But I did catch up with an old mate I hadn’t seen for 25 years – Ian Hamilton on Akarana,” said Edwards, confessing the average age of the crew is early 70’s.

And they were celebrating on Akarana, owned by Ian Hamilton and skippered by his daughter Vicki. “We won, we had a fabulous day.”

Ian, a sprightly man who turned 82 on Father’s Day, chipped in, “I got a free ride,” but Vicki maintains he did his fair share.

“The last couple of days were challenging. We fell into holes all over the place, but today we had an excellent start and kept it up from there. We had Big Yellow up (their big yellow kite), which got interesting when it got shy…. To get into the marina ahead of most was a nice change,” she said.