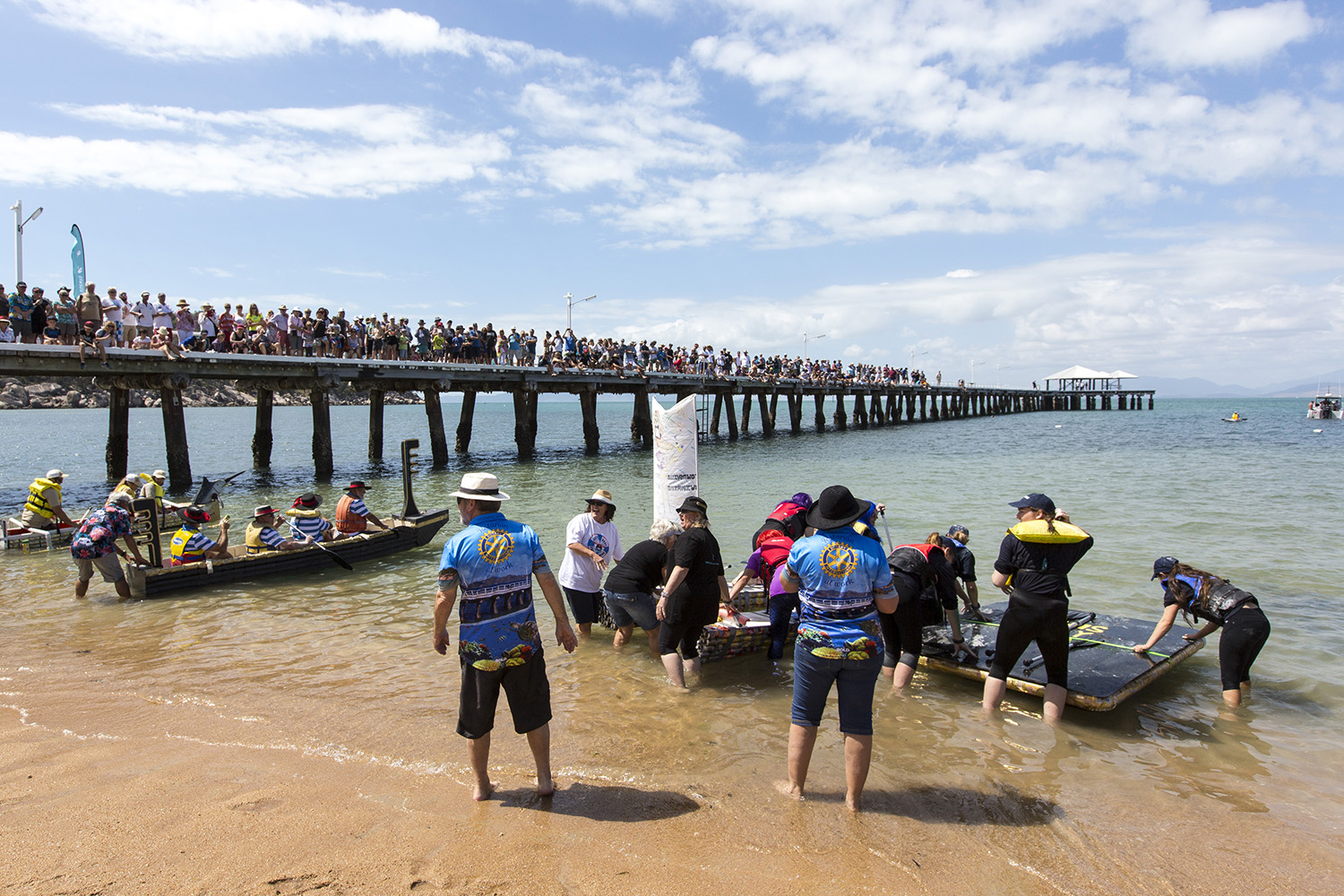 Line up for the start of the beer can regatta. Photo Andrea Francolini.

It was layday at Townsville Yacht Club’s SeaLink Magnetic Island Race Week yesterday so crews and locals got stuck into the Magnetic Island Rotary Beer Can Regatta and turned lunch and a live band at Picnic Bay into the Inaugural Pier Jump.

The quiet achievers of the Beer Can Regatta, “The Italian Stallions’, won the event after getting off to an ordinary start.

“They were dressed and looked like gondoliers in Venice. The boat was even made to look like a gondola,” an observer, Judy said. “They were probably the oldest crew there and they won by a long way.”

A team named ‘The Happy Hookers’ also did well, probably stunning people with their name. the Port of Townsville entry started disintegrating straight off the start and fell apart quite quickly while going around in circles as they could not get into sequence, which left some viewers quite disturbed, while the Peppers Blue crew played the game hard.

“They started pelting flour bombs and they were followed by water balloons and rotten eggs,” Julian said.

Back on the Beer Can race course, there was a fair amount of argy bargy at the top mark, competitors confused about which way to round it – typical yachties! It wasn’t pretty as some makeshift boats went nose down, others crashing broadside. It was on for young and old.

Meanwhile, over at Picnic Bay for a supposed spot of lunch while listening to some Australian rock from the Godfathers of Funk, some got it into their mind it was time for a pier jump, and so the inaugural Pier Jump competition came into being.

The Jump was led, naturally, by the Unhinged crew (no names, no pack drill) and pretty soon it was on for young and old. Five of the Wine Dark Sea crew (also naturally) joined in.

“First we enjoyed a seafood extravaganza,” Wine Dark Sea owner, said Peter Lowndes, and then we joined in.”

A normally competitive Olympian, Karyn Gojnich, decided watching was better. “You needed more than a competitive spirit,” she said laughing.

However, Lowndes’ partner, Sarah Goddard-Jones gave it a go: “It took me five false starts and finally I launched – I really wanted to do it,” she said.

While a number of participants favoured the feet first approach, as the competition wore on, others became more creative and there were some pikes and  double pikes thrown in for good measure.

This morning, Principal Race Officer Denis Thompson warned competitors the breeze would be a lot lighter than the past two days. There were no groans of disappointment. The truth is, most are still recovering from lay day at SeaLink Magnetic Island Race Week. Many were seen sipping coffees at Peppers Blue on Blue while waiting to discover what the day will hold.

For all information on SeaLink Magnetic Island Race Week, go to:   www.magneticislandraceweek.com.au/