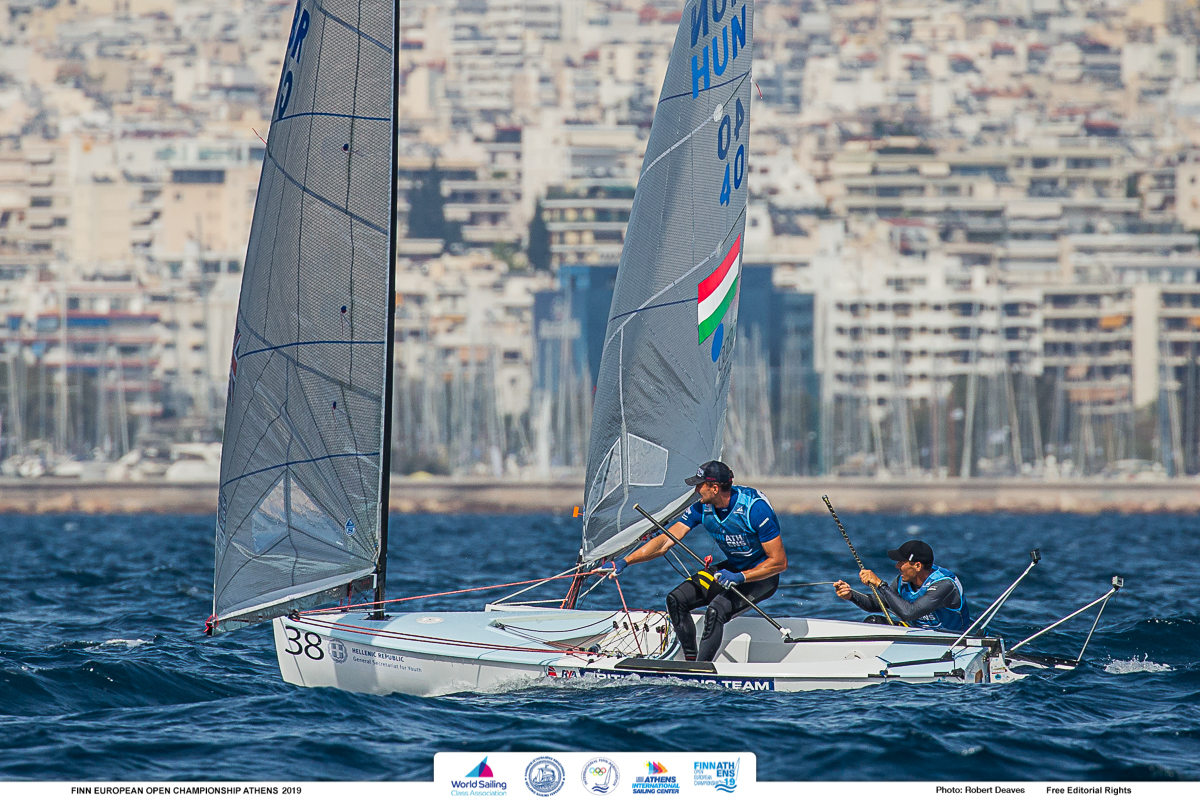 It was the day of reckoning in Athens, with two European titles to decide and two places at the Tokyo 2020 Olympic Games.

Despite the forecasts of wind in the morning, the sun beat down on a calm Saronic Gulf for most of the day. The cut-off for the warning signal for the Final Race was 15.00 and at 14.30, with signs of wind further offshore, the race team moved position and set a course with a start at 14.55.

Inevitably this was a general recall, which was quickly turned around with a new warning signal at 14.57, with just three minutes left. This start got away cleanly, with a left shift soon after the start.

After losing his Olympic trials on Friday, Pieter-Jan Postma from The Netherlands wanted to go out on a high, in his last race in the class. Judging the port layline perfectly, he rounded in first and led all the way to claim the race victory, a fitting end to 14 years campaigning the Finn.

It was a beautiful and poignant moment when Postma crossed the line, way ahead of the fleet, a supreme talent in the Finn class and one of the most popular sailors in the fleet.

Behind him the battle for the two places in Tokyo was heating up. Johanes Pettersson, from Sweden sailed a great race to cross in second, while 2016 Rio bronze medalist, Caleb Paine, crossed in third to secure a place for the USA in Tokyo.

Nils Theuninck crossed in ninth thinking he had secured a place for Switzerland in Tokyo but the elation turned to heartbreak when he was later disqualified after a mark rounding incident at the first windward mark. This meant that Ioannis Mitakis, who finished just behind in 12th, took the fourth place available here in Tokyo, for Greece.

So USA and Greece join Brazil and Norway as the four nations that qualified for Tokyo 2020 decided this week. Six more places are available from the continental qualifiers starting with the World Cup in Enoshima in August.

Paine said, “It was a challenging day with the points really close. We had nothing to gain and everything to lose. Fortunately I started in a good spot and it shifted in my direction.”

On the regatta, “I struggled on the first beats in this event. I couldn’t really catch a break but across the rest of the course definitely had good speed. Improving on that first best strategy is definitely something to work on.”

Now USA has qualified for Tokyo, “It’s nice to finally get the ball rolling in the right direction.”

For Mitakis, the relief at qualifying came after the jury decisions on Theuninck.

“I am really happy qualifying Greece, It was a big goal and nice to happen now so I have plenty of time to prepare myself, or whoever will go, as we have not had the national trials yet.”

The Medal Race started soon after with the possibility of a match race among the front-runners. Maloney escaped to the right soon after the start, which left Scott locked in combat with Berecz.

Scott slowed him and inflicted some match racing moves and a penalty to drag them both to the back of the fleet. Berecz had to beat Scott by eight places to take the title, but the title was as good as Scott’s from the first mark as they rounded some way behind the fleet.

At the front, Maloney took advantage of this and was soon in the lead to take the race win from Facundo Olezza, from Argentina and Alican Kaynar, from Turkey. Kaynar made a great move at the end to move into third, but it wasn’t enough to take the Europeans Bronze away from Heiner.

Scott said, “It wasn’t really the plan, but the Medal Race entailed me and Zsombor going at it a little bit, in a bit of match race which was good fun. Fortunately I managed to get the better of him after the first cross.”

“Zsombor was the only guy that could beat me, so I felt I had to go and be aggressive. It’s never nice sailing someone out of a position they had fought hard to be in but you have to work hard to protect your own position.”

Still friends afterwards? “Absolutely. The fleet is great like that. I like to think we are all good sportsmen and respect each other well, and I’ve also got a lot of respect for the week that Zsombor and Andy have put together. They are very deserving of the medals they got.”

On winning his third European title “It’s a great place to be. Winning a third title is amazing, but ultimately it’s all about what is happening in 18 months’ time. Every event and every training is trying to build towards that, so this is one little step along that journey to Tokyo.”

“It’s great to come here and great to win but always a lot of work to do.”

In the U23 European Championship, Joan Cardona took the title after sailing an excellent week and finished as top Spanish sailor, and just two places short of securing a Tokyo place. Second place went to Henry Wetherell, from Britain with Theuninck dropping to third.

It has been a fantastic European Championship, with great hospitality from everyone. Many of the sailors had been here training through the winter and in the weeks before the Championship.

The welcome from the Hellenic Sailing Federation and the local people has been amazing, and the sailing base at the Athens International Sailing Center is a perfect location for running a major regatta. It surely has a great future as a major regatta venue.