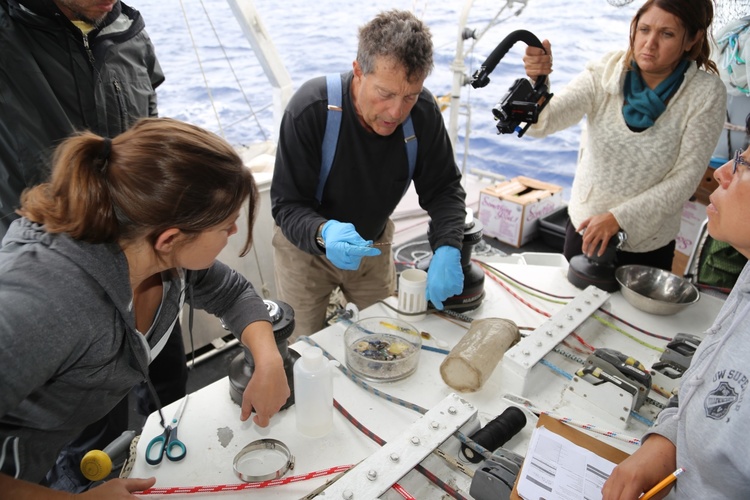 A team of scientists has confirmed the existence of another ocean garbage patch, this time in a remote area of the South Pacific. Unlike the famous patch in the northern Pacific Ocean, which has long been one of the world’s most recognizable symbols of pollution, the new patch is in an area that had previously been largely unstudied.

The high degree of plastic pollution was uncovered by captain Charles Moore and his team of volunteer researchers on a six-month voyage: “We discovered tremendous quantities of plastic. My initial impression is that our samples compared to what we were seeing in the North Pacific in 2007, so it’s about ten years behind,” said Moore, who has worked to raise awareness about plastic pollution since he stumbled across the North Pacific patch while captaining a racing yacht in the 1990s. Moore says the southern patch could be as big as a million square kilometers, 1.5 times the size of Texas.

Each of the oceans’ five major gyres has the potential to trap plastics and form a garbage patch. But while the famous patch in the North Pacific—and to a lesser extent its counterpart in the North Atlantic—has been well documented, little is known about plastic accumulation in the other gyres.

That makes the news about the South Pacific patch extremely valuable to other scientists, like Utrecht University oceanographer Erik van Sebille. He’s just begun an extensive project to track plastic distribution throughout the ocean. “There’s very little information on plastic in the South Pacific. Hardly anybody goes there, and it’s really very poorly studied,” he said. “We need observations like these to constrain our modeling, so I was excited to see Charles’ project.”

Moore’s is only the second team to collect samples of plastic pollution in the South Pacific Gyre. The first was led by marine pollution researcher Marcus Eriksen, who crossed the gyre in a single transect in 2011 and later published his findings. “At that time I saw very little debris,” Eriksen told us. Since then, an additional tens of millions of tons of plastic are thought to have made their way into the world’s oceans. Moore also attributes finding more debris on his recent voyage to the patchy nature of plastic in the ocean. One trawl may pick up next to nothing, because it missed the most concentrated spots, while the next is full of plastic, having hit one. That’s why a long research expedition over multiple months, crisscrossing a remote area off the coasts of Chile and Peru, was necessary to document the full extent of the pollution.