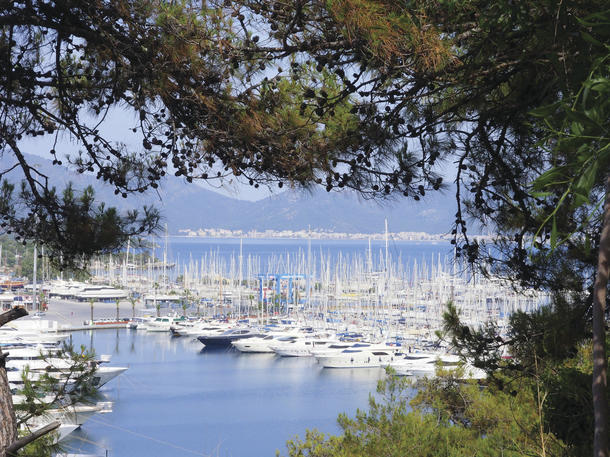 Marmaris Yacht Marina in Turkey is a good base for a yacht in the Med to avoid breaching Schengen rules.

Citizens from some non-member states require visas for entry into the Schengen area but Australia is not one of them. The 90 day maximum period during any 180 days period still applies.

The Schengen rules also require the payment of VAT on a yacht for it to move freely but yachts registered in non-member countries can stay for a maximum 18 months, before exiting the Schengen area. During the 18 month period the yacht can only be used by the owners and cannot be chartered, which conveniently fits the fractional ownership rules being used by our Australian company Yacht Share Mediterranean. Every time the yacht leaves the Schengen area the clock resets to zero.

A yacht imported under a temporary import procedure (TI), as it is officially called, cannot be used by citizens from EU member states under any circumstances, which raises the question of the announced British withdrawal from the EU following the Brexit referendum. Presumably the UK becoming a non-member state it will not be subject to the Schengen rules, so the exclusion of British passport holders from cruising on a foreign-flagged boat in a Schengen cruising ground will not apply. Given the presumed time that Brexit will take there will not be any change any time soon but, as far as I am aware, no information has entered the public domain thus far.

Turkey, Montenegro and currently Croatia are non-members, so an Australian flagged yacht based in any one of these countries can stay in the Schengen area for up to 18 months. Every time the yacht leaves the Schengen area the clock resets to zero.

Yacht Share Mediterranean has a new Australian registered Hanse 575 on its way to Turkey with the first owner use planned for September.

The current situation in Turkey has caused some unease on the part of the first owner and the yacht will re-enter Greece for his cruise in Greek waters. In fact the owner will board his yacht in Rhodes before setting off on an itinerary that will include Lindos, Karpathos, Chalki, Alimia, Tilos, Nisiros, Kos, Kalimnos, Leros. Lipsos, Patmos, Fourni, Ikaria, Gaideros and Samos.

Along this route he and his guests will move when the wind blows from the right direction and when the mood takes them. At the end of his cruise he will step off the boat in Rhodes and Yacht Share Mediterranean will return the yacht to the home port in Marmaris.

Greece is a member of the Schengen block but has recently repealed its Schengen legislation preventing extension of a foreign flag boat beyond six months, so the normal EU 18 month rule now applies.

The yacht will then be moved to Croatia for the 2017 season. It will operate from Sibenik under an agreement Yacht Share Mediterranean has with Dream Yacht Charter, which operates 50 yachts in Marmaris.

The Mandalina Marina in Sibenik is a superb facility, which sits conveniently at the centre of the Dalmatian coast with easy connection to Split airport via the new six lane expressway. Cruising itineraries to the north into the Kornati Islands, the Istria region and Italy are easy, while the more traditional routes to the south in the direction of Dubrovnik are equally simple. Dream Yacht Charter will service the yacht between owner usage and Yacht Share Mediterranean owners will be treated as if they were charter guests.

At the end of the season the yacht will return to Turkey thus resetting the Schengen clock. It will be wintered in Marmaris at the Yat Marina, a facility that ranks with any marina in the Mediterranean

The longer term plans for the yacht will see it cruising in France, Italy and Spain where it will also be serviced in Dream Yacht bases, returning at the end of each cruising season to the base in Marmaris.

Needless to say the legal texts associated with the Schengen rules are extensive and complicated but they are available: ec.europa.eu.taxation-customs.