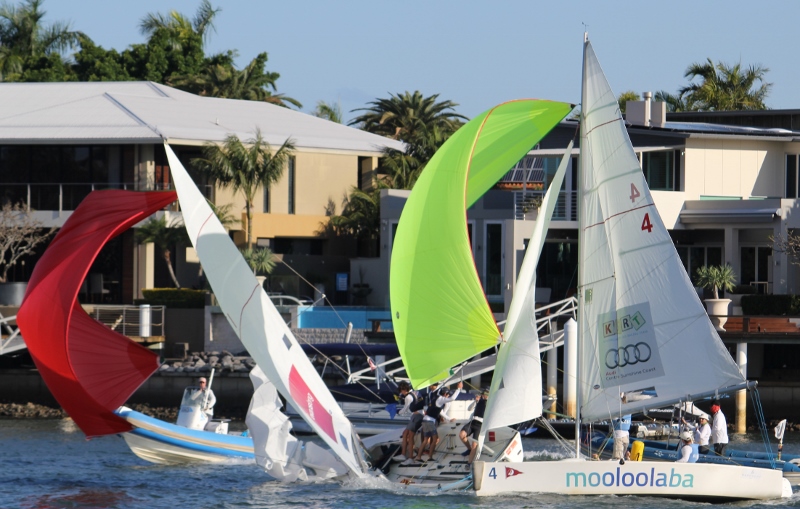 It came down to the last moments of the last race before the Sunshine Coast Sailing Team could be assured of taking out this year’s QLD Match Racing Championship open and youth titles. They battled seven other teams from Tasmania, Victoria, NSW and Queensland who were contesting the annual three-day event conducted by Mooloolaba Yacht Club on the river arena at Mooloolaba watched by a large crowd of spectators who lined the deck at The Wharf Mooloolaba.

At the end of two round-robins, the SCST had lost only one match. Skipper James Hodgson from Mooloolaba Yacht Club and his crew of Ben Vercoe and Fergus Gillanders, both from Noosa Yacht & Rowing Club, executed in every race slick crew work on the MYC’s Elliott 6s.

In second place overall at the end of the round-robins was the Cruising Yacht Club of Australia’s team of Tom Grimes, Dante Olivieri Finn Tapper and Eric Sparkes with two losses from 14 matches.

Grimes was up against the young team from Royal Yacht of Tasmania – Cadet class world champion and skipper Sam Abel racing with crew Will Cooper, Nick Smart and Charlie Goodfellow – for his Semi Final. Abel controlled each race to take out the best-of-three challenge.

In the other Semi Final, it was Hodgson against Sandringham Yacht Club team of Phillipa Solly, Rebecca Robson, Gemma Burns and Greg Jackson. Hodgson and his team again owned the race course to slip through the glassy patches on the river and play the soft gusts and tide to take them comfortably to two wins.

Grimes and Solly met in the Petite Final where Grimes found his form again in the tricky conditions where the breeze twisted over The Wharf-side buildings forcing the teams to make radical decisions on where to find the puffs they needed to drive them through to the finish line. Grimes finished with two wins and Solly with none.

The final match-up between Hodgson and Abel showcased superb racing by the two emerging match racing skippers and their crews. Hodgson had been off the water for almost four months recovering from shoulder surgery and was carrying a heavy cold. Abel was still trying to learn the match racing craft while contesting only his second regatta in his new discipline.

Hodgson had watched Abel over the previous two days slowly gain confidence on the tricky Mooloolaba river arena. “I wasn’t surprised when I found out we were up against him in the final,” Hodgson said after the regatta. “He has a lot of talent and I think he just had a slow start to regatta as he didn’t know the conditions. He definitely improved as the regatta went on and he was quickly adjusting to the conditions.”

The final day was grey, wet and the wind constantly shifting.

Match one went to Hodgson, just. Match two went to Abel, just. Match three was put on hold while the race committee moved the course as the breeze flicked around. The new course set was short and tight at the western end of the harbour.

“We set a goal at the beginning of the day just to keep doing all the basics right because we knew the conditions were going to be hard,” Hodgson said. “We wanted to control them in the pre-start and then lead them across the line. But when the five-minute gun went we were still trying to get out kite sorted out. We were kind of in a rush and didn’t have too much time to think about anything so we jumped straight into it and tried to get the basics right.”

It worked for them as they took control of the short race to lead around the two laps, across the finish line and into the history books as this year’s QLD Match Racing champions.

Hodgson was exhilarated by his team’s result, but felt physically and mentally exhausted by the end of the final day. “It was very tactical. You are always constantly thinking,” he added. “We are really stoked with the result, to have won the title at our home club with plenty of people watching from the shore.”