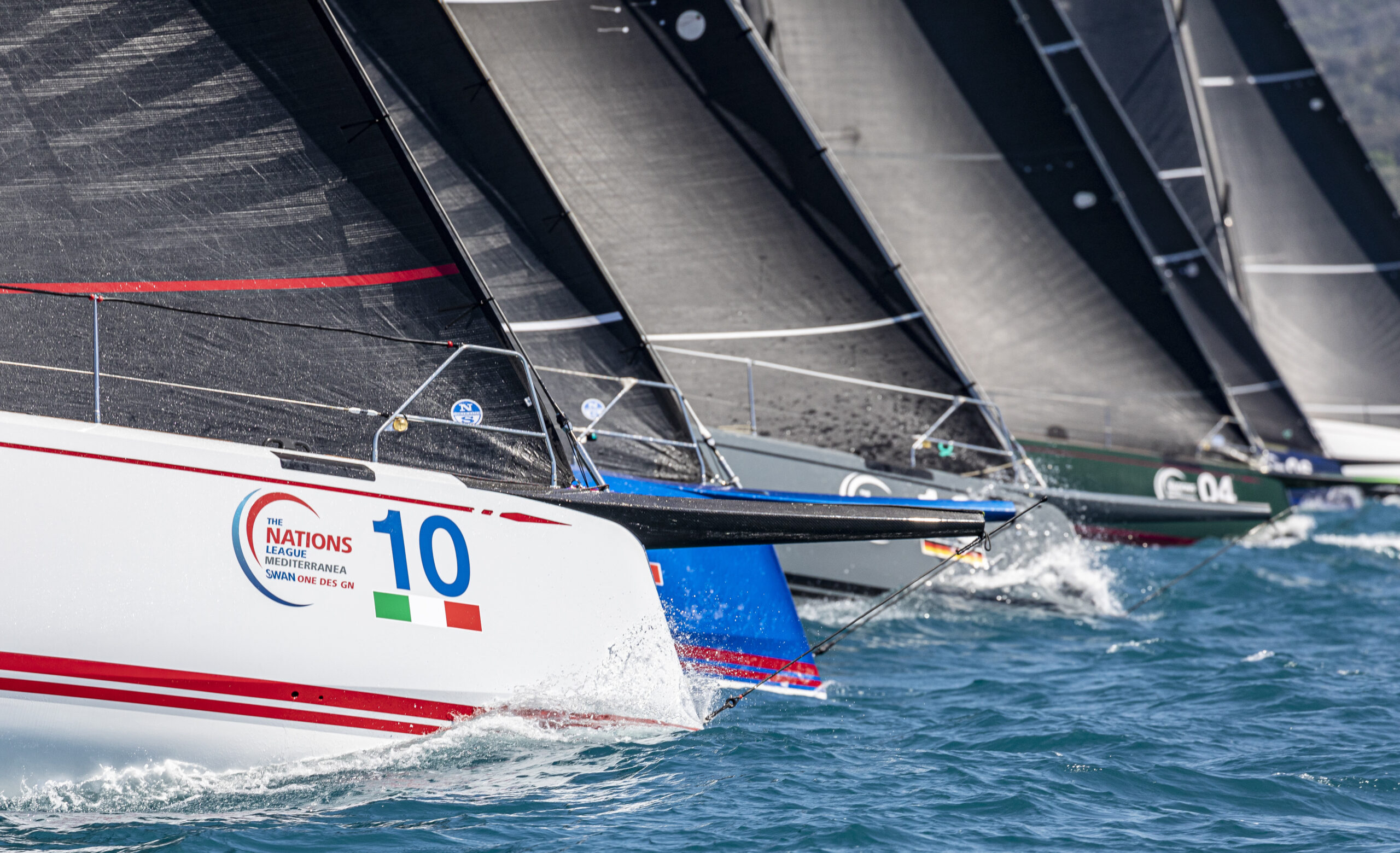 Passion, determination and skill were on display today as the curtain lifted on the opening event of what promises to be an enthralling ClubSwan Racing season.

The Swan Tuscany Challenge has seen a highly competitive fleet of 20 ClubSwan 36s and ClubSwan 50s representing 11 nations assemble in the Tuscan home of Swan in the Mediterranean, the Marina di Scarlino, Italy.

Racing got underway in ideal conditions and a southerly breeze of 12 to 15 knots with a practice start sequence and then a practice race out on the picturesque Gulf of Follonica, both expertly directed by the race management teams of Yacht Club Isole di Toscana and ClubSwan Racing.

While no points were awarded to either the Swan Tuscany Challenge or the Nations League scoreboards the competitive outing allowed the race crews – a mix of Corinthian sailors and professional racers – to hone their skills, with a number of boats offering an early indication of their potential.

In the brief first contest involving the 13-strong ClubSwan 50 class, Ross Warburton’s British-flagged Perhonen won the practice start and led the way up the beat ahead of Alberto Franchi’s Giuliana and Swedish entry Regina 2.0, co-owned by Jacob Wallenberg and Gutta Johansson.

Then in the main event Leonardo Ferragamo’s Cuordileone started on the left of the line and edged her way into the lead on the first beat ahead of Balthasar and August Schram’s Stella Maris – flying the flag for Belgium and Austria respectively – with the three contesting the lead around the course.

“We are at the beginning of a new season, with a lot of excitement and we cannot wait to start tomorrow. The fleet is growing and we have newcomers, but all the sailors are great so the competition is super-high.”

Among the newcomers in the ClubSwan 50 class are the team on Natalia, who have made the step-up from racing the Swan 42 and had a good opening day coming fourth in the practice race.

Helm Natalia Brailoiu said: “I enjoyed today so much; I like the boat – it’s amazing. We have moved class, but the team is almost the same and we have been together a long time.”

And she added: “We don’t make plans we just aim to have fun and do our best – for us it is like official training as it is our first time with the boat.”

Also making their debut in the class are the team aboard the Monaco-flagged Moonlight, which was only recently launched and is the newest addition to the fleet.

“We bought it because we wanted to get involved in one-design racing, and we knew this was a good class,” said her owner Graeme Peterson.

“It’s been an incredible experience and we have been looking forward to it with great anticipation because of the high level of competition.

“We have a lot to learn and it is a very steep learning curve, and the crew has not sailed together much before. We are newcomers to this, and we aim to get better each time.”

Meanwhile the teams in the ultra-modern ClubSwan 36 class were also put through their paces, revelling in the near perfect racing conditions.

The impressive G-Spot continued where she left off last season, taking first place in the practice race ahead of Fra Martina and Turkish entry Facing Future, while the competitive Cuordileone did not finish.

“There is a high level of competition,” said G-Spot’s owner Giangiacomo Serena di Lapigio. “Due to the international situation, there are not as many of us as last year, but the level is high. Fra Martina is always very good, and the new Brazilian boat Mamao is sailing very, very well.”

The latter will be disappointed to have been over the line in the practice race but showed real pace around the course.

“With the pandemic it has been difficult to get us all together, so it’s nice to be together at last and nice to be here in Scarlino,” said Mamao’s tactician Ross MacDonald, the Canadian double Olympic medallist and Whitbread Race veteran.

“It’s all about learning, and we are looking to pick-up where we left off two and a half years ago, and there is no better way to learn than to have six other boats around.

“There are a few teams here who have great experience of the 36. We don’t but we are looking forward to lining up with these guys and giving it a go.”

And he added: “It looks like it’s going to be a moderate breeze but the weather looks good, so I think we are going to have a really good week.”

Back ashore following the first taste of racing owners and crews were able to take advantage of the outstanding facilities and support offered by Nautor’s Swan Global Service shipyard – Scarlino hub, as well as the exclusive amenities provided in the Marina di Scarlino.

Thoughts then turned to the Swan Tuscany Challenge opening ceremony and cocktail party with drinks provided by Ferrari Trento, a partner of the ClubSwan Racing 2022 One Design circuit.

The owners, crews and guests were welcomed by Giovanni Pomati, CEO of Nautor Group, who said: “Welcome to Scarlino, the home of Nautor’s Swan and its sailors. It feels like yesterday when we greeted each other in Saint Tropez and here we are again for a season full of excitement, love for sailing and high competition.

“The Swan Tuscany Challenge kicks-off an intense year of events. I’m always amazed by the vibe we have here – you guys are super-competitive at sea and great friends ashore. It is the way the world should be – compete for what you believe but let friendship win over everything.”