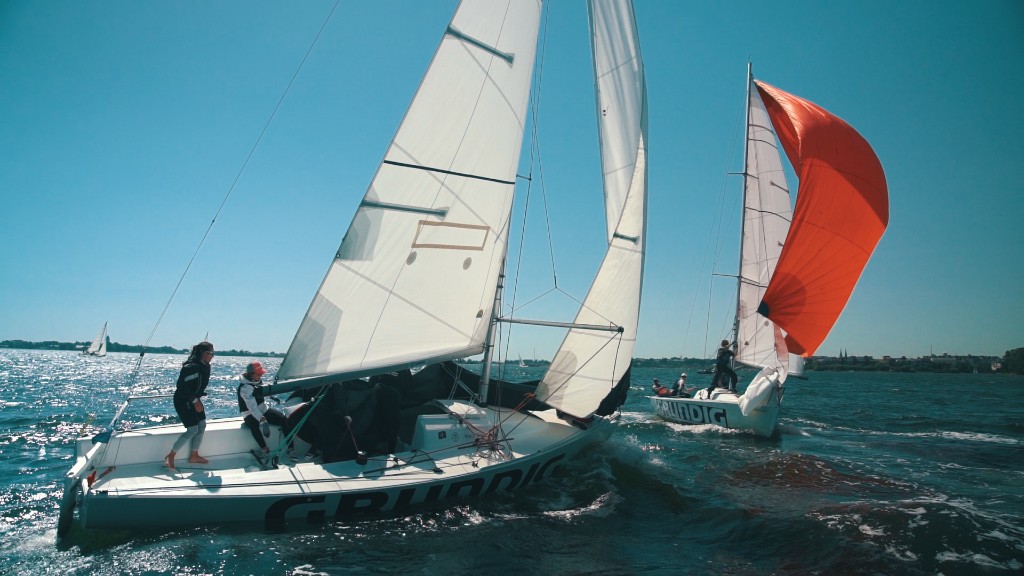 Close finish between Courtois and Blecher as Courtois tries to take her penalty. Credit: Anton Klock

The day began with the final spots in the quarter final still up for grabs and ended with the field reduced to four teams from four countries moving on to the semi finals.

Often times the round robin is criticized for the last few flights being meaningless, but that was not the case in Helsinki today. The last spot in the quarter-finals came down to the last match of the round robin. If local Jassi Skogman’s team wins the match their match over Hanna Ericksson they move on, and if not, they would be tied with the Sanna Häger and lose the tie-breaker based on their head to head match from the first day. But Skogman received a penalty and was not able to complete it before Ericksson finished.

“We were cheering on Hanna Ericksson’s team when they sailed against Skogman, so we were really happy when they finished first in the race,” smiled an elated Hägar at the end of the round robin.

The winner of the round robin, Marinella Laaksonen, had the honor of selecting her quarter final opponent and chose the last one in, the Swedish team of Sanna Häger. And then they waited until the other quarter final matches were completed before they had their turn. Laaksonen’s team continued their hot streak with three straight wins over her Swedish competitor. “It was quite nice racing with some heavy winds again and everything felt good in the boat,” mentioned Laaksonen after returning to the dock.

Laaksonen and Bergqvist will both be sailing in their first semi finals in a WIM Series event and are both excited about the opportunity and Laaksonen said “Hopefully everything goes well and you will see us in the finals tomorrow,” Bergqvist was equally enthusiastic saying “We are so excited. It is going to be so much fun. We have been training really hard this season to be able to be there.”

Trine Palludan and her experienced Team Kattnaken from Denmark are also through to the semi finals with three straight wins over the local Team Sköna Vibissar skippered by Antonia Degerlund. “It was really nice conditions out there today, with sun and a nice breeze. It is nice to be here in Finland.”

The battle of the day was a Franco-American affair between Pauline Courtois’ Match in Pink by Normandy Elite Team and Team BAAM! led by Allie Blecher. The five match fight saw lead changes, penalties, luffing matches, tacking duels and close finishes – all of the hallmarks of great match racing. The Americans put the French up against the ropes by winning the first two matches. But Courtois’ team showed their championship grit and fought back to win three straight “must-win” races and squeeze into the semi finals with a 3 – 2 victory.

A relieved Courtois sighed, “It was difficult. We did some small mistakes in the two first matches. But we continued to focus on the technique and the strong wind and I think that made the difference. We need to continue that job tomorrow.”

In the morning, Laaksonen will again get to choose her opponent and has not let us in on her decision yet. Let the suspense begin!

The event will conclude on Friday with the semi-finals and finals followed by the closing ceremonies at the NJK Clubhouse on Blekholmen Island.