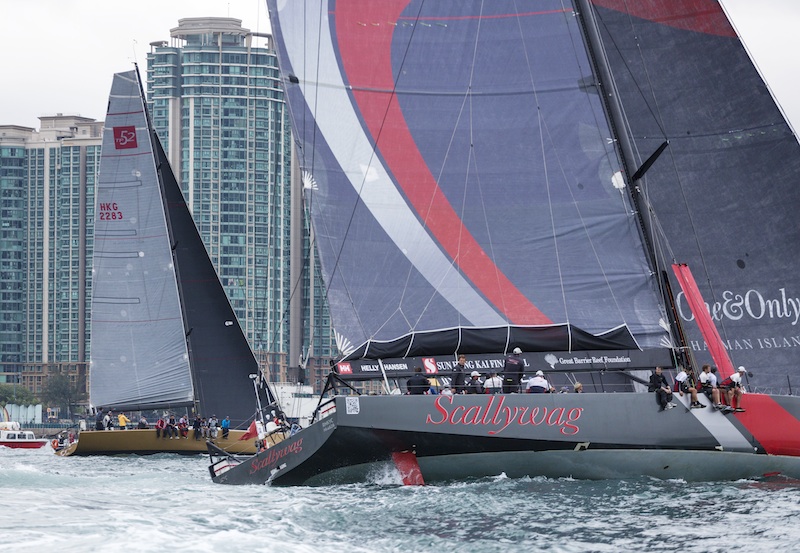 Scallywag at the start of the San Fernando Race. Photo Guy Nowell.

It is now confirmed that Hong Kong’s 100’ super maxi Scallywag owned by Seng Huang Lee has won across the board and raced her way to win three titles in the 40th Anniversary of the San Fernando Race.

Titles include the win in division IRC 0, the coveted IRC Overall win and a new race record of an impressive 34h27m17s; an incredible 15h27m55s faster than the 16 year old record set by Sam Chan’s 70’ ULDB Sled, FfreeFire in 2001.

On arrival last night Scallywag’s Skipper David Witt commented on the race “Today's sailing was very nice; flat water, perfect sailing, good sunrise this morning and a nice sunset tonight.  The first night was a little rough and we had a bit of a major structural failure but we managed to get here in one piece so it's all very good.”

With the rest of the fleet closing in on San Fernando and the TP52s currently stuck in a bit of a hole it will be interesting to see how the evening plays out in the conditions along the coastline at nightfall.

A few of the 40s are close on the TP52s’ tails including Steven Manning / Anthony Root’s Ker Custom 42 Black Baza and Joachim Isler / Andrew Taylor Mills 41 Ambush.  The next boat, expected to arrive at around 2000hrs, is the Philippines entry Ernesto Echauz’s TP52 Standard Insurance Centennial who is currently in 2nd place in IRC 0.