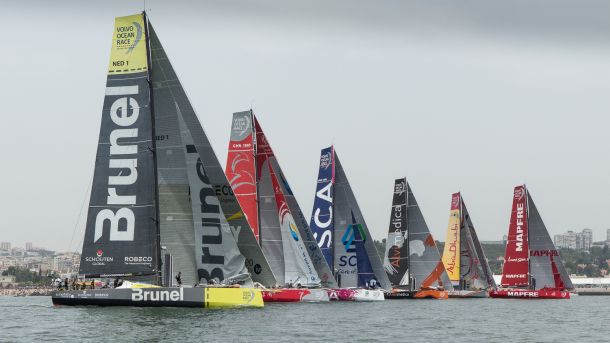 Races may be long but starts are still competitive

Team SCA (Sam Davies/GBR) found themselves leading the fleet after a night of thunderstorms and fluctuations as the Volvo Ocean Race Leg 8 entered the first full day in the Atlantic on Monday.

Skipper Sam Davies and her team have always eyed the shorter final legs in Europe as their best chance to shine against the male counterparts and so far on the 647 nautical mile stage from Lisbon to Lorient, France, they have sailed impeccably. There is still a long way to go on a leg that is expected to conclude in Brittany in the early hours of Thursday, but the women were certainly enjoying the unaccustomed feeling of being at the head of the competition on Monday. At the 0645 UTC position report, Team SCA led by 5.5nm from overall race leaders Abu Dhabi Ocean Racing (Ian Walker), having taken the route nearest to the coast of Portugal, where the wind was at its strongest (see panel above).

While it is good to see Team Vestas Wind back in the fleet and starting out as first overnight leaders, skipper Chris Nicholson (AUS) noted they were caught in a large thunderstorm around 0500 UTC and dropped from first to fifth. They will be delighted with their progress so far, however, showing good boat speed despite some six months out of the race while their boat was rebuilt following a collision with a reef in November on Leg 2.

Team Brunel (Bouwe Bekking/NED), who need to beat Abu Dhabi Ocean Racing to close their six-point deficit on them at the head of the standings, were tucked in fourth place while Dongfeng Race Team (Charles Caudrelier/FRA) were last placed, 8nm further astern. They suffered a small tear in their Code Zero sail when it caught on the spreaders. The crew have successfully repaired it.

The Chinese boat also needs to finish ahead of Azzam to boost their chances of overall victory in the final port of Gothenburg.

Meanwhile, Team Alvimedica (Charlie Enright/USA) were placed sixth, but still comfortably in the main pack behind Team SCA. The Turkish/American team’s skipper has issued a joint blog with Ocean Conservancy CEO, Andreas Merkl, to mark World Oceans Day on Monday. The blog will be available from 1100 UTC on the team’s website. Ocean Conservancy is one of the world’s leading advocates for ocean health.

Enright is an ambassador for 11th Hour Racing, a programme of The Schmidt Family Foundation, which establishes strategic partnerships within the sailing and marine communities to promote collaborative systemic change for the health of our coastal, offshore, and freshwater environments. He and Merkl wrote: “The ocean provides much of the food our global population consumes, along with the air it breathes and the waters that nourish it.

“We owe this miraculous and marvellous system all we can muster to protect it and its inhabitants. Science has shown us where a large majority of the plastic waste is coming from and current research is showing us what we can do to stem the tide of plastics entering the ocean.

“Let’s make sure that future Volvo Ocean Races do not encounter the vast amounts of plastics that the 2014-15 Race has observed. Let’s focus our efforts on solving this global problem – together.”