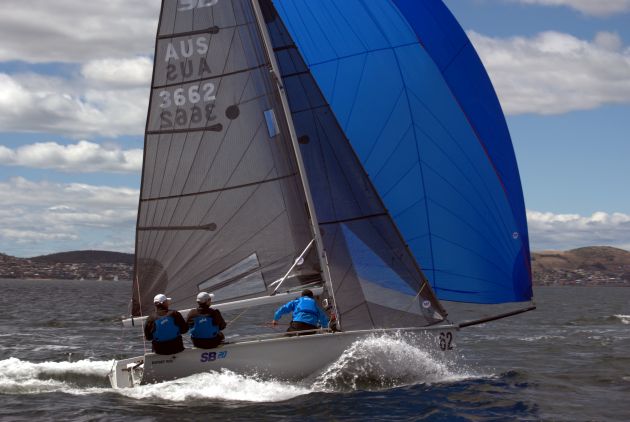 Well-known Derwent Sailing Squadron Scott Brain, one of the first Hobart sailors to buy an SB20 one-design sports boat when the class was introduced four years ago, today won the 2016 Tasmanian championship on the River Derwent.

A star-studded and record fleet of 23 SB2os contested the championship with Brain sailing Ronald Young Builders to victory in a closely fought series within the Banjo’s Shoreline Crown Series Bellerive Regatta over the weekend.

Brain, a past Tasmanian champion in the SB20 class, sailed consistently throughout the eight race regatta while his nearest opposition went off on a ‘covering’ each other in the final race. Brain finishing the regatta and the championship with an eighth (his discard) and a fourth and second on day two to end the series with a net 21 points. Over the weekend his scorecard read: 4-1-4-5-1-(8)-4-2.

In the final race Nick Rogers (Karabos) and Michael Cooper (Export Roo) went covering each other to finish 12th and 14th respectively in the 23 boat fleet. These were their drop races and Karabos finished with a net 24 points, Export Roo on a net 30 points.

Father and son sailors Michael Cooper and William Cooper, who plan to head overseas this year to take on the world’s best sailors in the SB20 sports boats and International Cadet world championships, both showed their sailing skills at the Crown Series Bellerive Regatta.

Michael Cooper and his crew of David Chapman and Matthew Johnston plan to sail Export Roo in the SB20 Worlds at Cascais, Portugal, while his teenage son William (14) and Hugo Allison (11), the current world champion crew, have been selected to represent Australia at the Cadet worlds in Argentina.

Racing was delayed for between 30 and 45 minutes on a windless River Derwent until a south-easterly sea breeze moved up the river, turning the day into a perfect day for sailing, sunny, temperature in the mid-20s and a steady breeze.

As the day warmed, so did the competition with some aggressive starts with a number of boats ‘black flagged’ for starting line infringements in the SB20s and the Laser dinghies.

“A glamour day, a perfect sea breeze of 5-8 knots freshening to 12 knots,” said principal race officer Nick Hutton. “The only thing that marred the day was the action of the red tourist ferry Emmalisa which coming down the Bellerive shore made a 90 degree turn and steamed right though the Laser and 420 fleet just after their start… we will be reporting this incident to MAST (Marine and Safety Tasmania),” he added.

Other overall winners in the OTB (off the beach) classes were Lovett and Pallas Taylor-Smith who won every race in the International 420 class and were awarded the Bellerive Regatta Association Trophy, Tom Males (Laser 4.7), Angus Price (Laser Radials, Rupert Hamilton (Optimist), Bruce Rose (Paper Tiger) and Daniel Maree (Sabot).

In the keelboat classes, Derwent Sailing Squadron Vice Commodore Peter Haros ended a climaxed a winning streak in which he won the valuable prize for early entries, then sailed Wings Three to victory in both the AMS and PHS categories of the Performance Cruising division 1.