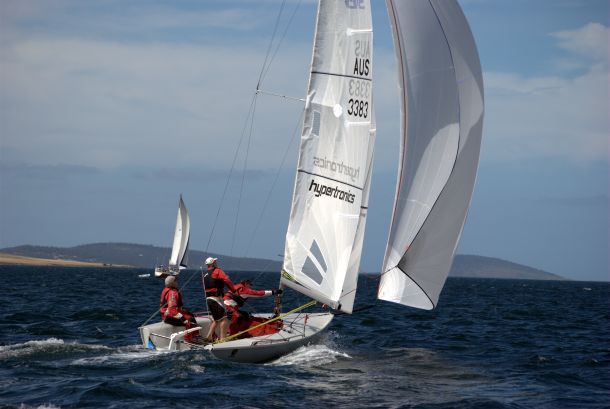 Three former Australian champions, two of them past Olympic sailors, are expected to contest the Tasmanian and National championships for the SB20 one-design sports boat class to be sailed on Hobart’s River Derwent in early March.

Derwent Sailing Squadron expects up to 30 of these high-performance small keelboats, sailed by a crew of three or four, to contest the State championships on March 4-5 and the Nationals from March 7-9.

The Hobart SB20 fleet itself totals 21 boats, the largest in the country, and local class and club officials have high expectations of hosting the 2018 World championships on the Derwent. Designed by Tony Castro, there are more than 700 SB20s world-wide.

Bourke, who has also represented Australia in the Finn class at the 1992 Olympics and sailed in the America’s Cup and Admiral’s Cup, finished runner-up in the 2012 SB20 Worlds at Hamilton Island, beaten only on a count back of race placings. He won the SB20 National title in Hobart in 2011.

“Current Australian champion Chris Dare from Victoria and 2013 champion Ian Brown, from NSW, an Olympic bronze medallist in the 470 class, have also indicated they will contest the 2015 championships on the Derwent,” SB20 class spokesman Steve Catchpool said today.

Catchpool said that with such a strong fleet on the Derwent, the locals were expected to be strong contenders for the Australian title, headed by State champion Nick Rogers, a former world champion in the International Dragon class.

“At previous Australian SB20 championships Nick has notched up a second, a third and fourth,” he added.

Also sailing well in current events in Hobart are Scott Brain, Nick Rogers, David Graney, Andrew Blakney and Steve Catchpool, along with Michael Cooper and Hughie Lewis who have moved from racing Farr 40 keelboats to the SB20 sports boats. Another likely contender will be prominent foiler Moth sailor Rob Gough.

In addition to the regular SB20 Thursday twilight pennant series, an important lead-up to the State and National championship will be the Crown Series Bellerive Regatta over the weekend of February 13-15.