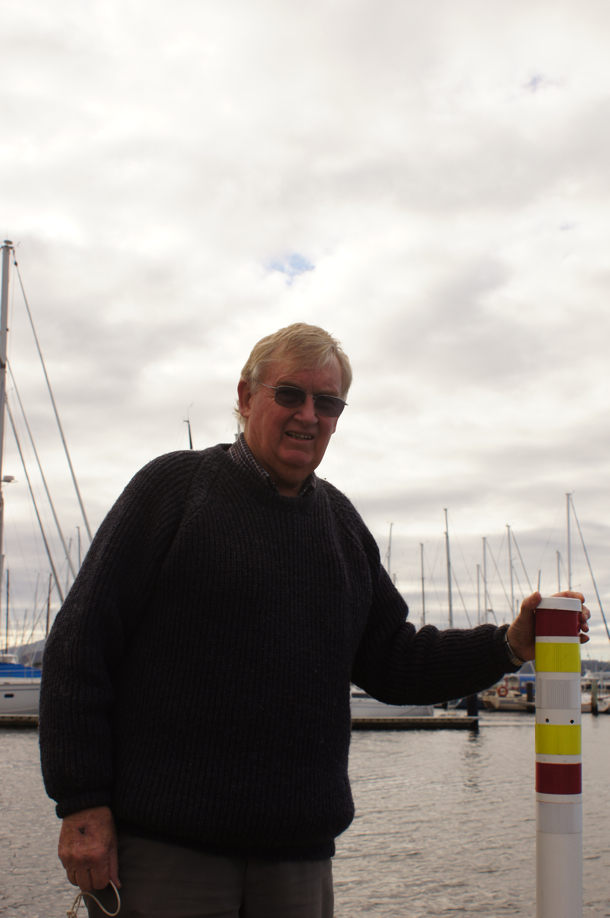 A Tasmanian yachtsman has designed what he believes to be the most effective danbuoy system ever invented and is looking for buyers, or even companies to produce his patented design.

Believing the current available danbuoy launch systems to be useless, both as a cruising yacht's emergency aid in a man overboard (MOB) situation and even under the international yacht racing rules where such systems have to be simple and quick; Green believes every yacht racing is, therefore, illegal!

“The present prescribed danbuoy system is too slow to activate with a crewmember having to get to the stern rail, detach and throw,” Green states.

“The current requirements state such recovery items must be in easy reach of the helmsperson but, as we know, this is impracticable.

The immediate response by the helm is to stop and turn the boat back towards the MOB.

“In a panic situation and adverse weather, it is very risky trying to get a crew member to the stern rail and even if a crew does succeed, by this time the stern will, most likely, be pointing in the opposite direction!”

So what is Green’s solution? To incorporate the acronym KISS: keep it simple stupid.

A danbuoy tethered to a life buoy and self-igniting light that is instantly released from any predetermined location on the vessel within immediate reach of helmsman or other designated postions such as the navigator.

At first call of ‘man overboard’, a danbuoy system must be fully deployed in seconds. In addition, the danbuoy must be visible from a distance, better than a flag on a stick.

Green’s MOBbuoy is a system he designed, built and fitted to his own boat. It is fully deployed within four seconds upon activation, floating a flag two metres above the water and connected to a lifering.

All it takes is the tug on an easily grasped handle that can be led to any predetermined position on the boat. A victim falling from the bow can have a fully-deployed system to hand by the time he clears the stern. This reduces the crew panic to maintain MOB watch, thus enabling the helmsman and crew to take controlled action under less stressful circumstances.

When Cruising Helmsman visited Peter to view the MOBbuoy in action, unfortunately he had sold his yacht so we hand-trialled the deployment off a wharf at Derwent Sailing Squadron.

The unit stands about 1.5 metres tall and slots into a bracket fixed to the transom pushpit. A pin at the bottom of the tube stops the MOBbuoy from deploying. Simply by attaching a pull cord to that pin and then routing it to wherever you think it is needed, the MOBbuoy then becomes instantly deployable by anyone.

On his own yacht, Green had his unit deployable from both the helm station and from the navigator’s table. Simply clever.

When the pull cord removes the holding pin the weight drops out of the tube and pulls the whole unit out of its bracket. This makes the flagpole extend out of the top of the unit displaying its flag.

Other accessories can be added to the unit: tie a line to a horseshoe ring; include a water-activated light or AIS/GPS unit; rig an unfurling V-sheet. Or even attach other safety equipment for the MOB such as a whistle, radio or torch.The important thing is the MOBbuloy is active in less than five seconds and the boat crew can concentrate on getting the boat back and ready for retrieval.

Peter Green is keen to see his idea installed on boats everywhere, “at this stage I can manufacture these units to order but I would like somebody to pick up my idea on a more professional basis.”