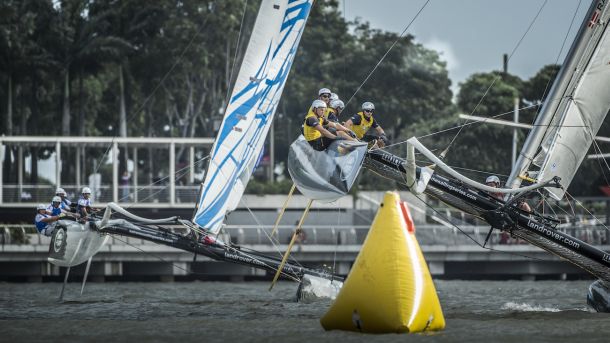 SAP Extreme Sailing Team sailed a near faultless day on day two of the Extreme Sailing Series in Singapore, clearly relishing the inner city stadium racecourse, and striding ahead into first place – a day topped off by winning the Aberdeen Challenge Trophy.

The Danish team were the stand out performers of the day, clocking up more points than any other, and their co-skipper and helm Jes Gram Hansen was quietly confident ahead of the penultimate day’s racing tomorrow. “There’s still a long way to go and anything can happen in Singapore, but we’re really happy to be leading halfway through the regatta. It’s no secret that last year was a disappointing season for us so it would be great to get a good result here. Two years ago we were on the podium in Singapore, so we’d love for that again this year. We know we can do it, we just have to focus on the things we know.”

Red Bull Sailing Team were also on fire and threatening the lead all day, with two race wins for the formidable duo of Roman Hagara and Hans Peter Steinacher and the team with the distinct charging bull on their sail from Austria boosting them up the leaderboard at the end of play. Speaking after racing, Hagara commented on the new team formation. “We are a great mixture of guys on board now. On one hand it is the experience and knowledge of Hans peter and myself. On the other hand it is the power of the young guns. They know no limits. This is the thoughest sailing competition on planet earth. There is no other regatta, where you need to win or sail constantly in 30 races, over four days, to end up on the top of the podium. As always, the winner in Singapore will be chosen in the final race of the regatta”

As a two-times champion looking for a hat-trick of titles on what is an eight-regatta circuit in 2015, McMillan and the team on The Wave, Muscat had an unrewarding day, with a yo-yo performance by their exacting standards, that saw them relinquish their day one lead to finish the day in third – but just one point behind the Austrians.

In a programme of six races plus the Aberdeen Challenge knock-out trophy, racing was made unpredictable by the city’s ring of tall buildings that saw inconsistent performances from the majority of the fleet in the light conditions. But ultimately, the experienced hands got the measure of the track, with four returning skippers claiming the top positions including Igor Lisovenko and Gazprom Team Russia under helmsman Phil Robertson. Robertson summed up the day: “This is the trickiest racecourse I’ve ever sailed on. It was a tough day, but we were never really out of the top five so that was the consistency we were looking for. Then we had a few fifth places, which cut us deep but overall we did well. Over the next two days we just need to continue to start well and then try and string the rest of the race together.”

The light conditions also played in favour of British 49er sailor Stevie Morrison and the team on Oman Air who took their first race win of the season to upgrade their overnight position from seventh to fifth, and are now tied on points with Lino Sonego Team Italia, with Beko Team Turx another eight points back. “It was great to win a race but winning the regatta is about performing consistently not just winning one race,” said the British Olympic sailor. “We are a new team and this shows we have a lot of potential. If we can beat everyone, in theory we can do it again and again but we all know it’s not as easy as that so it is all about establishing some consistency.”

The local entry Team Aberdeen under skipper and round the world sailing legend Nick Moloney with Aussie Adam Beashel in the driving seat also had a better day, breaking into the top half of the fleet and adding 40 points to their tally. The locals are tied on points with the Aussies on GAC Pindar, who will be left feeling frustrated tonight, after they struck the sea wall in the pre-start of the second race of the day, breaking their bowsprit and knocking them out of the following four races.

As soon as the GAC Pindar bowsprit was removed, Seve Jarvin and his team set to work, determined to return to racing as quickly as possible. The hard work paid dividends when the crew finished in fifth place in the twelfth flight of the Act, before they sealed second place in the Aberdeen Challenge Cup.

GAC Pindar Principal, Andrew Pindar says: “As the team were preparing for the start of today’s second race, a sharp, unexpected gust of wind changed direction, catching the crew off guard. Our GAC Pindar boat clipped the side of the dock, breaking the bowsprit. We’re proud of the hard work the crew put in to ensure they were able to race again today and we’re looking to move up the leaderboard over the weekend.”

Tomorrow the fleet head into the business end of the regatta, with just two days racing left at the opening Act of the season as all the teams look to establish a hold on the leaderboard as a sign of intent for the season ahead. Watch the racing live from 1600 local time, www.extremesailingseries.com.