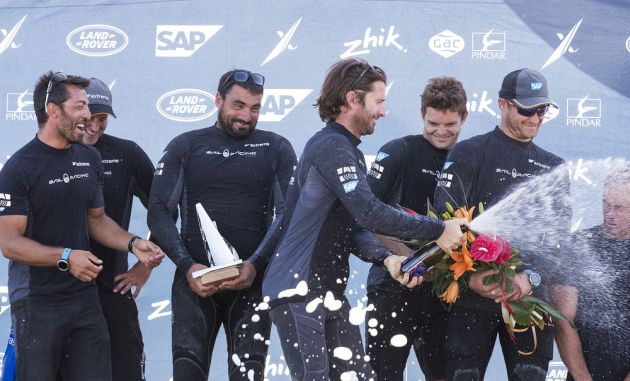 It all came down to the final nail-biting double-points race of Extreme Sailing Series Act 3, Madeira Islands, which went the way of Danish-flagged SAP Extreme Sailing Team.

Alinghi fought back to take second from Oman Air, but was not able to do enough to catch SAP Extreme Sailing Team. The Swiss syndicate finishes second and Oman Air makes up the podium in third.

“It was extremely stressful out there. The wind was shiftier than the first two days,” said Adam Minoprio, helm of SAP Extreme Sailing Team. “At one point we were last at the first mark and then we managed to be first at the bottom. Then in the last race, the opposite.

“It was incredibly stressful for us sailing and I'm sure it was stressful for everyone watching, but I'm very, very pleased to come away with a win,” added Minoprio.

It was a double victory for the Danes, who also take home the Zhik Speed Machine Trophy for the fastest team on the water for hitting 24.5 knots in the Bay of Funchal.

Starting the day in third, Alinghi posted a string of good results, including two wins and two seconds, but was not able to put enough boats between itself and the leader to make a difference in the final race.

“We secured second place overall so it was a really good day for us,” said co-skipper and helm Arnaud Psarofaghis. “We had a really great battle with SAP Extreme Sailing Team the whole day and we could have almost beaten them in the last race but they were stronger than us, so we are really pleased with second place.”

“Barcelona is another race and a new story, and we're really looking forward to that,” added Psarofaghis, whose team will compete alongside the rest of the fleet in Act 4, Barcelona, in less than three weeks.

While that means two Act wins for SAP Extreme Sailing Team this season to Alinghi's single Act victory, the Swiss team remains ahead on points on the overall leaderboard.

Things had looked promising for Oman Air coming into the finale, however skipper Phil Robertson and his crew struggled in the six races, only managing three podiums.

“The three of us; SAP Extreme Sailing Team, Alinghi and our team were very, very tight, and were exchanging blows left, right and centre, and sometimes it wasn't paying off,” said Pete Greenhalgh, mainsail trimmer for the Omani squad. “You're trying to slow someone down a little bit and hurt them and end up really hurting yourself, so we didn't quite get it right on a few occasions.

“We definitely wanted to win the event and finishing third is a disappointment, but the reality is that we weren't good enough to win. The fact that we were nicely in the mix we are happy with. I feel like our game has moved on but we've still got a bit to go,” Greenhalgh added.

“Definitely up and down with emotions,” said Red Bull Sailing Team skipper Roman Hagara, whose shore crew finished repairs to the damaged boat just in time for it to be launched for racing this afternoon.

“Yesterday we had the capsize when the rudder came off, and then today not much time to sail before the racing started. In the end it worked out well. We had two race wins and won the final race. It was a good finish,” added Hagara.

The Austrian-flagged syndicate moved up to take fourth from NZ Extreme Sailing Team, which struggled to match its form of the first half of the regatta and finished fifth.

“We're having a close battle right now with Red Bull Sailing Team,” said NZ Extreme Sailing Team co-skipper Graeme Sutherland. “They're the next ones in our sights but I think the top three are sailing very consistently. They're hard guys to beat regularly but we do know we can do it and I think our time will come.”

Land Rover BAR Academy pulled two podium finishes out of the bag on the final day, but the deficit was too much to change its fate. The Brits finish sixth, 19 points ahead of wildcard entry Team Extreme

In the Flying Phantom Series, Red Bull Sailing Team was crowned champion of the regatta, having been a clear leader since the beginning. The two-man crew included Jason Saunders and Thomas Zajac, who came fourth and third in the Nacra 17 class in the 2016 Rio Olympics respectively. The second and third spots went to the French, with Culture Foil 36 points behind the leaders and ZEPHIR by Idrewa a further 13 points back in third.

The international 12-strong fleet of Flying Phantoms, which joined the Extreme Sailing Series for the first time in Madeira, provided plenty of foiling entertainment for the crowds filling the free entry Race Village.

The event also marks an achievement for the Extreme Sailing Series, which was awarded the Gold certification by the Sailors for the Sea in its Clean Regatta programme, achieved by introducing a number of sustainable practices to reduce the environmental impact of the event. NZ Extreme Sailing Team was awarded the 'Green Team' trophy.

Act 4 of the 2017 Extreme Sailing Series will take place in Barcelona, where the fleet will race from 20 – 23 July. Find out more about the event, including the VIP packages that are available, on the official event website.