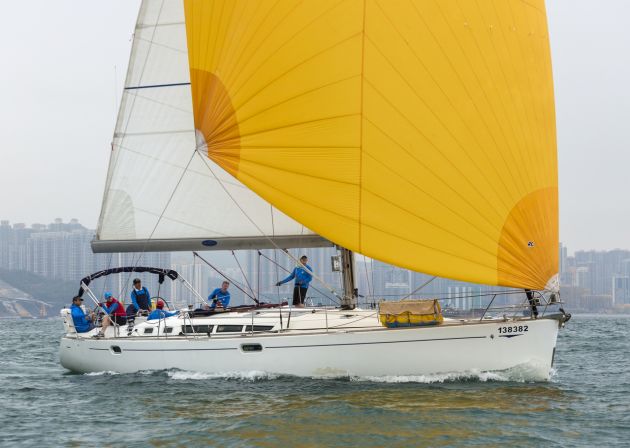 The final boats raced in to San Fernando, Philippines on Saturday night and early this morning including Emocean2, Christopher Allan’s Swan 55 the sole double handed entry, which arrived at 18:42:12hrs. Christopher Allan was accompanied on board by long time offshore sailor Olivier Decamps. Emocean2 received 4th in the Premier Cruising Division.

Christopher Allan commented on the racing; “This was our first double handed race.  It was a very challenging race to do it double handed in that the South China Sea throws everything at you in three days – calm weather, stormy weather, beautiful sunshine and still air.  It was very interesting and we had to be ready for it all.  We thought that sleep would be a challenge but it wasn’t really.  We managed with the conditions because we prepared for it.  When you’re sailing double handed you have to prepare early – you don’t do things at the last minute, you reef early and sail to plan.” Olivier Decamps added “ I would do it again.  It was a really good race. There should be a class for double handed.  Thank you to the Club for allowing us to do it.”

A span of 51hrs separated the first boat to arrive and the last this morning.  Michael Lunn’s Azuree 40FC Lion Rock sailed in at 02:18:10hrs.  Tim Bruce’s Jeanneau Sun Odyssey 49 Diamond Queen followed at 03:02:47hrs taking first in the HKPN division. Sadly Richard Winter’s Moody 46 Soko sailing in the HKPN division retired in the early hours of this morning due to light air.

Peter Churchouse, San Fernando Race Chairman, summed up the race;  “There were strong winds out of Hong Kong, 20 to 25kts, 2m seas, the usual pattern and absolutely gorgeous sailing and as you get halfway down the track, full moon sailing with the kite up, it was a classic San Fernando (and a classic Rolex China Sea Race for that matter). It's the conditions we have come to love and expect over the 40 years of sailing in these races, so it fulfilled my expectations to a great extent.  Since arriving in San Fernando the hotel has been terrific, great hospitality, the Philippines customs and immigration have been terrific and done exactly what they said they would do and have provided a great service and we should be very thankful for that.”

Congratulations to all division winners of the 40th anniversary of the San Fernando Race including Hong Kong’s 100’ super maxi Scallywag owned by Seng Huang Lee for her win in her division IRC 0, the coveted IRC Overall win and the new race record of an impressive 34h27m17s an incredible 15h27m55s faster than the 16 year old record set by Sam Chan’s 70’ ULDB Sled, FfreeFire in 2001. To Steve Manning / Anthony Root’s Custom Ker 42 Black Baza for her win in IRC 1 and 2nd place in IRC Overall and Anthony Day’s XC50 Explorer for her win in the IRC Premier Cruising Division.