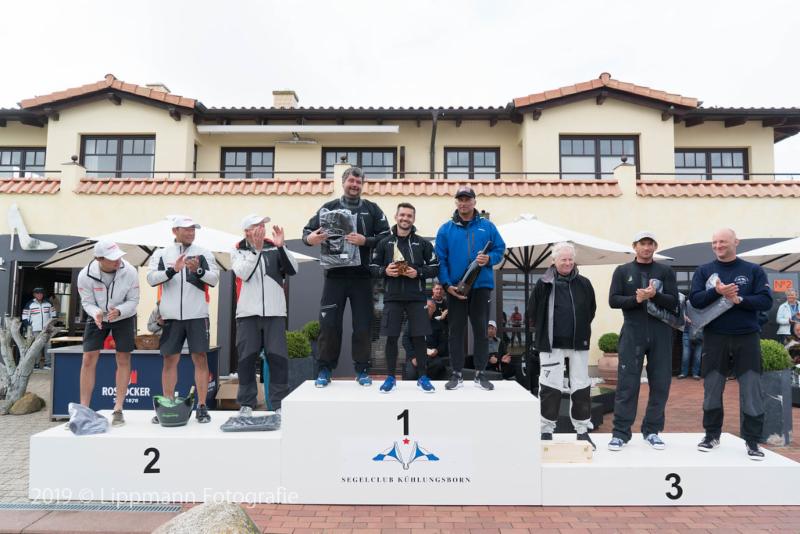 Racing took place in a light but slowly building south-westerly which was a complete contrast to the previous day’s heavy airs. Those heavy airs generated a strong current, which added a significant tactical challenge.

Pieter Heerema sailing Troika (NED) with Lars Hendriksen and George Leonchuk was the star of the day with a pair of wins, but he'd gone into the day with too much to do and could climb no further up the leader board than third overall.

Heerema took an early lead in race five, as Gilmour and Samokhin were slugging it out back in the pack. Gilmour went into the day with what looked like a comfortable lead, but he soon found himself desperately defending as Samokhin worked relentlessly to get sufficient boats between them to close the gap. At the finish line, Samokhin was eighth and Gilmour 12th.

Completion of the fifth race brought the discard into play. As the 40-strong fleet got under starter’s orders for the sixth and final race, Gilmour was still hanging onto his lead by six points from Samokhin.

Both boats got decent starts in race six, but it was clear that Samokhin had a speed advantage and he took off on the heels of Heereman in the knowledge that the situation was now in the lap of the Gods.

Gilmour did all he could, but couldn't seem to gain traction. After sailing, the Australian admitted, “We went with the wrong gear. We had a heavy genoa up and it just didn't have enough punch.”

As they came to the final finish line, Samokhin crossed in second behind Heerema and just head of Frenchman, Gery Trentesaux. There followed an anxious few moments as Samokhin and his team stared back down the track until, with relief, they watched Gilmour cross the line in 10th place.

After racing, Heerema's tactician, Lars Hendriksen, talked a little about how they had approached today's races: “We had an idea that the current was pretty strong, so on purpose we started a little bit down the line, which was very biased towards the committee boat.

“We traded that for going left. In race five we basically kept going left – there were just five boats going left – but we stuck to our plan. When we came closer to land, we got a header and we’d been on a pretty high course all the way into the shore, so it worked out.”

Heerema self-deprecatingly joked about his tendency to start poorly and improve as a regatta goes on: “It’s becoming a bit of a tradition that we, well probably it’s me, that we are a bit of a slow starter at each regatta.

“There’s a bit too much time between the regattas for me and I need to sail more, but I don’t have the time for that sadly. It takes a few races to get warmed up, but then it goes.”

In the Corinthian Division for all amateur crews Philip Dohse Puck IV (GER) with his wife Nicola, Volker Kramer and Christian Möller, had a day of mixed fortunes. He was sixth in race five and 18th, his worst result of the regatta, in race six.

In his acceptance speech, Dmitry Samokhin praised the Segelclub Kühlungsborn and its volunteers. “Thank you for organising such a great event on the water and ashore, we felt love, care and happiness all the time. It’s not the first time we've sailed in Kühlungsborn and every time it’s been great sailing here, it's a great venue, so thank you everyone,” he said.

The fourth and final qualifying regatta in the series and the Dragon European Cup Grand Final will both take place in Porto Portals, Mallorca. The final regatta will run from 11 to 14 November and then the top 20 crews, including a quota of Corinthian sailors, will immediately move forward into the Grand Final which will be raced on 15 and 16 November.