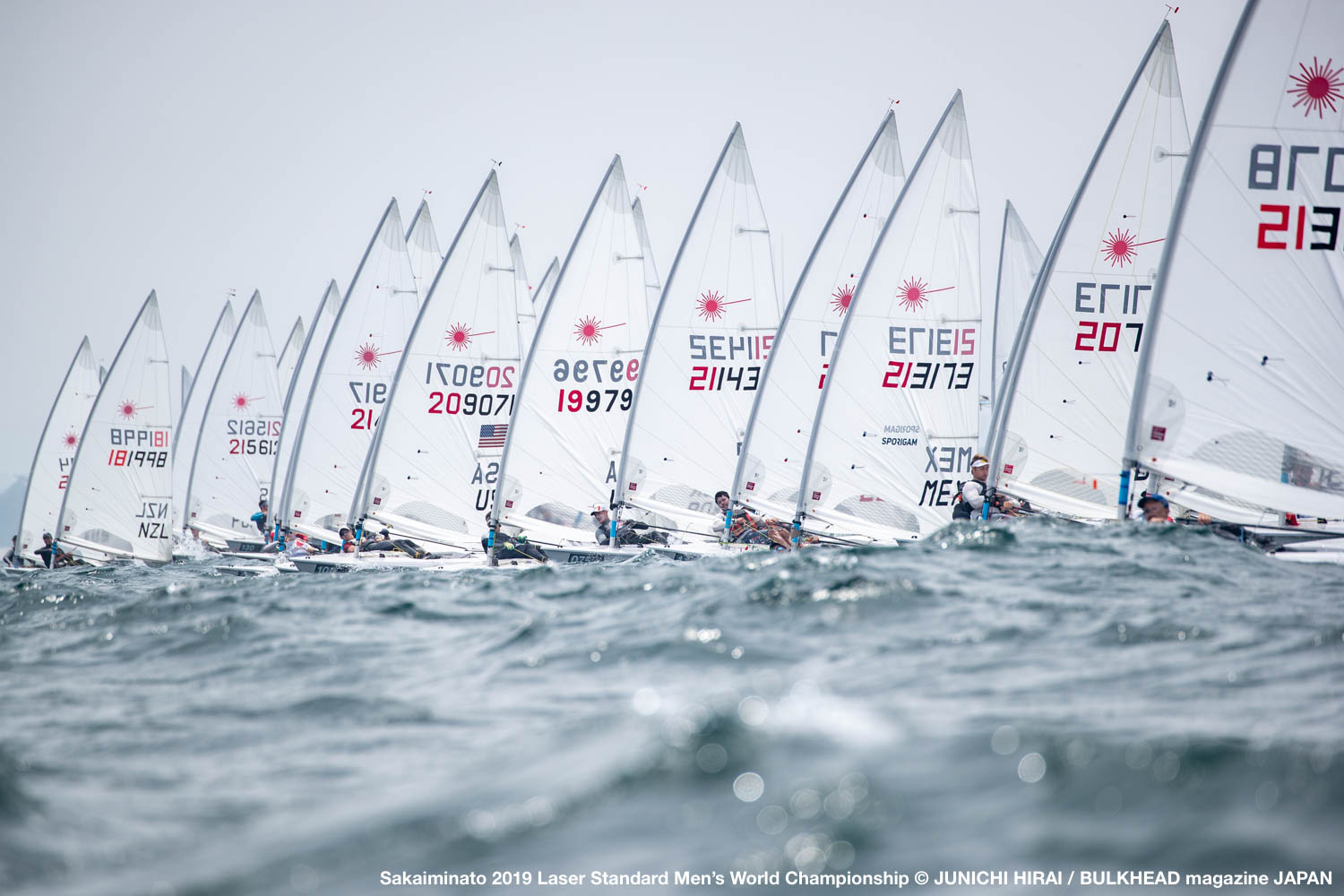 The tight standings are testament to the high level of competition at this Olympic qualifying event where five sailors will qualify their country for a berth in the Men’s One-Person Dinghy Event at the 2020 Tokyo Olympics.

Three fleets completed two qualifying series races in north winds of 15 knots that tested both the sailors’ hiking stamina and their wave riding skills in the open waters of Miho Bay off Japan’s west coast.

With the fresher winds today than on day one, a few new faces appeared at the front of the fleet.

In the day’s first race, the Yellow Fleet got away clean on its first starting attempt. Michael Beckett from Great Britain and Sam Meech of New Zealand soon worked their way to the front of the fleet with excellent upwind speed.

Jesper Stalheim stayed in the hunt upwind, but in the 3-5 foot swell, he showed exceptional speed on the runs to make big gains. At the finish it was Beckett in first, follow by Meech in second, with Stalheim closing the gap into third.

After a number of recalls that resulted in several Black Flag disqualifications, the Blue Fleet finally got away on a clear start in its first race of the day. George Gautrey continued his form from yesterday, leading the fleet to the first mark, with Elliot Hanson (GBR) and American Henry Marshall close behind.

However, Korean sailor, Jeemin Ha, had a few nice runs to put himself in the lead at the bottom of the last run followed by Kaarle Tapper (FIN) and Hansen. Hanson surprisingly capsized at the final mark, allowing Gautrey to slip by. In the end, Tapper was able to run down Ha for first, Ha took second and Gautrey enjoyed his third place gift, courtesy of Hanson.

The Red Fleet’s first race of the day looked to be an epic battle among some of the world’s best sailors. Downwind skills were on full display in the surfing/planing conditions. In particular, Philipp Buhl (GER) showed outstanding speed on the runs, passing several
boats to finish second just behind Tonci Stipanovic (CRO).

Rounding out the top three was Australian, Matthew Wearn, who did well to hold off the charge of reigning world champion, Pavlos Kontides, who worked his way to fourth by the finish.

In the day’s second race, the Yellow Fleet took its turn with a few General Recalls before getting away under a Black Flag.

Stalheim and Meech again found themselves in front of the pack, but this time with Russia’s Sergi Komissarov rounding out the top group. This trio led at the first mark and essentially managed to sail away from the fleet. At the finish, it was Stalheim in first follow by Meech and Komissarov in second and third respectively.

The Blue Fleet also saw many of the same sailors at the front in its second race of the day. Ha again showed nice downwind speed to move into the lead. This time he was able to hold his position for the win. Belgium’s William De Smet sailed his best race of the series to take second in front of Brazil’s Robert Scheidt in third.

Matthew Wearn found his groove in the day’s final race, prevailing in a close battle with Jean-Baptiste Bernaz of France to take first place. Bernaz and Wearn were neck and neck down the final run, but in the end Wearn got the better position at the bottom mark to secure his victory.

In third was Hermann Tomasgaard of Norway, who sailed a brilliant second weather leg to move into a comfortable third place at the top mark, a place which he held to the finish.

Qualifying series races continue tomorrow with two races scheduled to decide the gold, silver and bronze fleets that will sail in six finals series races to determine the world champion.