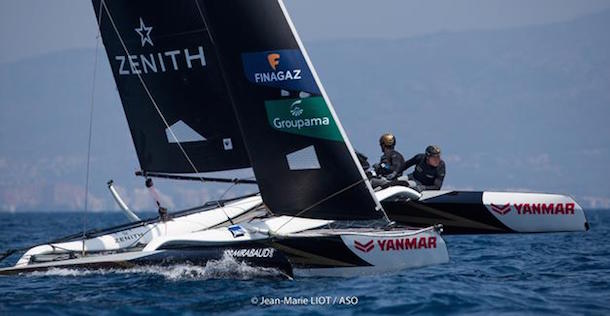 These five teams are in competition for a place on the 2015 Tour de France à la Voile podium. Groupama, CombiWest, Spindrift, Grandeur Nature and Vannes Agglo have substantial point margins between them, but with seven days of racing still coming up, there is everything left to play for.

Spindrift won the coastal race in Roses today, the Tour’s first race on the Med. François Morvan and his crew were eager to cancel their frustration after Act 5 in Les Sables where they didn’t get the results they were hoping for (7th and 9th). “We are back in the game,” said Spindrift helmsman. “In terms of points, it’s not that flash as we only gain two points over Groupama, but it’s still good to win. We know they are sailing really well, without making any mistake, when we have pay for ours for a while ! It was a good fight with Combiwest today. They passed us 4 or 5 miles from the finish. But we passed them back upwind. We know we can sail well on the Med.”

The fleet didn’t have the sailing conditions they were expecting today, with lighter wind and fog in the southern part of the 35 mile long course that took the boats down south to round Medes Island, and back in the Bay of Roses, in Catalonia. “It was strange, with movie like ladscapes in the south near the island. The water was white near the rocks, whilst there was no wind around… It was absolutely beautiful, but I think it was better not to go there. And that was the key moment of the race. We decided to go offshore and take the risk to do more distance, but it paid off because then we were like rockets downwind,” said CombiWest skipper Frédéric Guilmin.

Groupama finished third despite an average start. They only lose one point over their biggest rival, second overall, CombiWest.

Young guns of Vannes Agglo are going really well in Coastal Racing format. Third in Les Sables d’Olonne on Tuesday, they finished fourth today in front of their main rival on the Tour’s leaderboard, Grandeur Nature.

Behind the top 5 boats, the next positions are highly contested, with only eight points separating 7th Beijaflore from 10th Maître Coq. And some teams results have improved in the last few Acts. PRB finished 6th, their best position since Pornichet. Vincent Riou welcomed fresh Nacra 17 world champion Billy Besson at the helm today and for the next two Acts. “It took me a while to have the boat in hand, as I could not find the best angles. The level is very high on the Tour, it’s incredible to be part of it. The boat is a bit heavy and it doesn’t fly and but accelerations are nice. Coming from a lighter cat, I struggled to find the pace. To go fast, it works in two steps : first you find the speed, then you find your heading. I was looking for the angle straight away and it didn’t work,” said Billy Besson. His Nacra 17 crewmate Marie Riou was also sailing today in Roses. She stepped onboard Sodebo as a tactician and we stay in for the rest of the Tour all the way to Nice.

Tomorrow the fleet will sail in Stadium Racing Format right in front of Roses Marina Pier to offer a great show to the crowd.