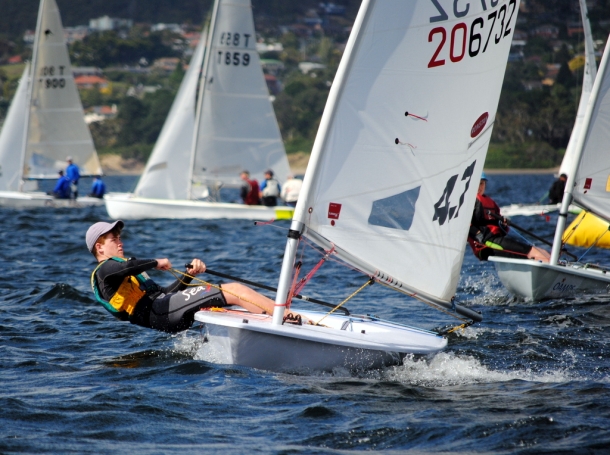 King and 28 other young Laser sailors from around Tasmania gave a brilliant display of seamanship and tactical skills in the single-handed dinghy with winds ranging from boisterous northerlies gusting to 30 knots on Saturday and lighter and shifty southerly winds on Sunday.

Similar fine sailing performances were seen in the State championships for the International Cadet Dinghy class, with 17 of these two-crew dinghies racing out of Sandy Bay Sailing Club, the title going to Angus Price and Archie Ibbott.

King finished comfortably clear in the 16-boat Laser 4.7 fleet, finishing with a net 6 points, second place going to Josh Ragg on 13 points, third to Will Evans on 17 points after a championship long duel with Will Sargeant, who finished one point back in fourth place.

New Tasmanian International Cadet champions Angus Price and Archie Ibbott, along with Sam Abel and Hugo Alison, have already been chosen in the Australian team for the Cadet worlds on Italy’s Lake Garda in July and the previous weekend Abel and Alison outsailed a classy fleet in the Victorian state championships on Port Phillip.

This weekend, however, belonged to Price and Ibbott, who won five of the eight races sailed to decide the Tasmanian championship.

They finished with a net 7 points, second placing going to Jasmin Galbraith and Matilda O’Donoghue on 15 points, third to Abel and Alison on 18 points, followed closely by Blake Nicholson and Noah Haas with 22 points and Toby Burnell and Craig Goodfellow on 26 points.