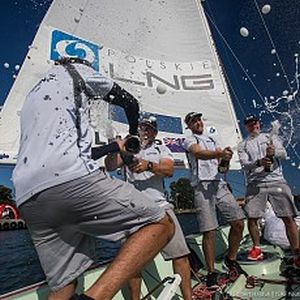 Today was the big day to see who would claim the title of this year’s Youth Match Racing World Champion by way of a Petit Final and a Final. There were a few concerns about accuracy of weather predictions as only 7 knots were expected.

Thankfully there were 8-9 knots and the Race Committee used the primary race area in the channel. The top four teams, Aschenbrenner (DEN), Gilmour (AUS), Ronnberg (FIN), and Snow (USA), assembled at the briefing this morning and picked their boats. Competing in the Petit Final – Match 1 were Ronnberg and Snow. Their match would be first team to two points wins 3rd Place leaving the other to 4th Place.

Aschenbrenner vs. Gilmour were Match 2 racing in the Final for 1st and 2nd Place and theirs would be first to three points wins.

Petit Final – Match 1 started first with Ronnberg vs. Snow. In the Qualifiers Snow finished second with 9 points and Ronnberg was fourth with 8 points. Both began by taking penalties at the start line for being over early but that didn’t hinder either team. Ronnberg held control of the match all the way around the course. Snow kept up and sailed well but never managed to get out from under Ronnberg. This continued in Match 2 making Team Finland 3rd overall and Team USA 4th.

Final – Match 2 Aschenbrenner vs. Gilmour was the second start of the day.

Aschenbrenner was first in the Qualifiers with 10 points and Gilmour was third with 9 points. As in the Petit Final, the pre-start for the Final was tight and aggressive with both Aschenbrenner and Gilmour over the start early. Gilmour won Flight 1 and Flight 2.

Flight 3 ended abruptly at the top mark when Gilmour deliberately failed to give Aschenbrenner room at the mark, the boats made significant contact, and Aschenbrenner was not only squeezed into the mark but got tangled in it causing the boat to stop completely. Gilmour having already received two penalties in the pre-start and still having one outstanding, deliberate failure to follow the rules did not amuse the Umpires in the least so was given a double penalty and a black flag. The scores for the Final – Match 2 were Aschenbrenner 1/4 and Gilmour 3/4 after Gilmour beat Aschenbrenner in Flight 4 giving Gilmour 1st overall and Aschenbrenner 2nd.

The event was completed with a closing ceremony and prize giving at the town square where teams and locals alike gathered to congratulate the winners and an amazing week of match racing.