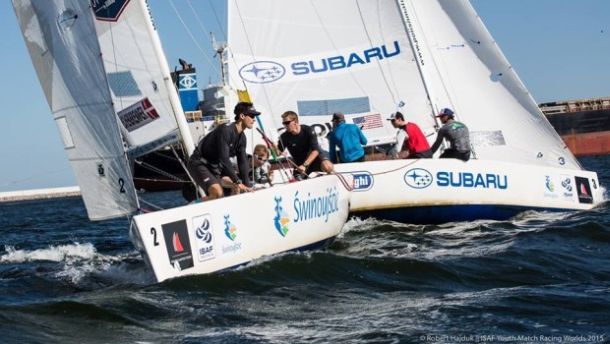 Today was the third day of races at the ISAF Youth Match Racing World Championship. In the morning the Race Committee announced the race area would be outside the channel as the wind, though a consistent strength at 10-12 knots, was not coming from suitable direction for racing in the channel.

Teams raced seven flights in the Baltic Sea but only six were completed due to competitors in Flight 31, Switzerland’s von Ruti versus Italy’s Galati, managing to get tangled in fishing nets! The ‘AP’ flag was raised postponing the race to get the boats untangled and checked properly under the waterline.

Race Committee also decided to take this opportunity to move the racecourse back into the channel with the wind having swung around and now being favourable to do so. Waiting teams and spectators were happy to get an up-close view of the action.

The pressure is clearly on as it gets closer to the end of the round robin qualifying rounds, you can see it and you can hear it as the races heat up. It will only continue to increase as the regatta goes into knock out rounds of quarterfinals tomorrow morning, then semi-finals, and the battle for positions in petit-finals and finals.

Match racing is an incredibly dynamic style of racing and the competition has not disappointed. In Flight 29, Malecki (POL) against Schrimper (GER), Schrimper received a DNF for not sailing the proper course. Umpires gave von Ruti (SUI) a black flag in Flight 31 racing Galati (ITA) ending the match.

Today’s big race to watch was Flight 30 – Match 2, Nevin Snow (USA) versus Joachim Aschenbrenner (DEN). Both are at top of the fleet along with Sam Gilmour (AUS) and are all veterans of the event. At the 2014 ISAF Youth Match Racing World Championship in Helsinki, Finland all three battled it out over podium spots with Denmark taking gold, Australia taking silver, and the USA taking bronze. Other skippers who participated in last year’s event include Ronnberg (FIN), Galati (ITA), and Klitte (SWE).

Results of the Qualifying Round: