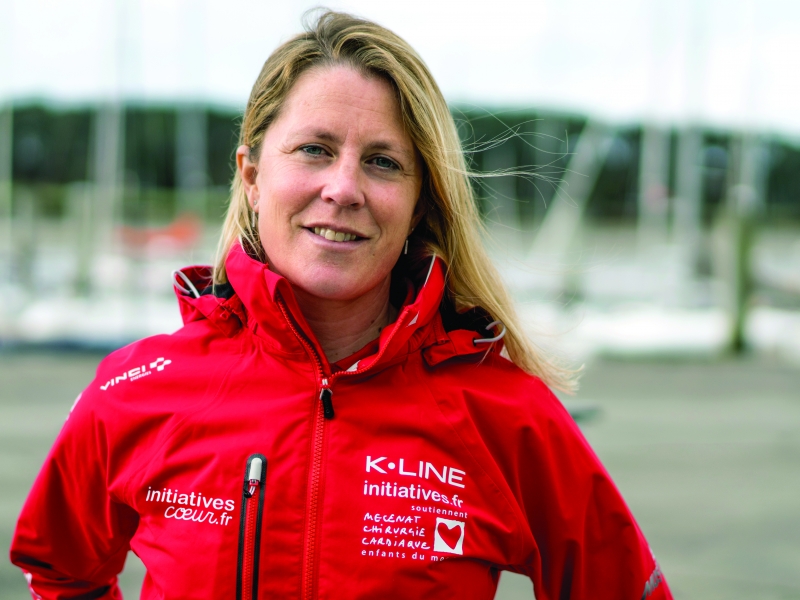 The veteran British ocean racing sailor Sam Davies loves to remind people that she is a “rookie” when it comes to the Route du Rhum-Destination Guadeloupe but she is eager to get going and see whether she can spring a surprise in an older generation boat.

Davies, aged 44, has a long and impressive career in professional sailing behind her – she has completed six two-handed transatlantics, three Solitaire du Figaro campaigns and entered the Vendee Globe twice, finishing fourth in 2008-09. She has also skippered a boat in the Volvo Ocean Race – Team SCA in the 2014-15 edition.

It is surprising therefore that she has never quite managed to get to the startline of the “Queen” of transatlantic tests, the Route du Rhum-Destination Guadeloupe. But she is ready to join the 20-strong IMOCA fleet in a few days time off Saint Malo for the 3,542-nautical mile thrash to the Caribbean.

She is sailing Initiatives Ceour, a VPLP-Verdier design from 2010 that was raced to third place in the 2016-17 Vendee Globe by Frenchman Jeremie Beyou in the colours of Maitre Coq. By rights this boat should be outclassed by the more modern designs – for example Alex Thomson’s Hugo Boss and Beyou’s brand new Charal.

But Davies and her team have been working hard to improve the boat’s performance with the addition of foils and changing the sail plan and the running rigging to set it up in a way that will suit her. Already this year in shorter build-up races in the IMOCA class, Davis has scored two second places and a win and some pundits believe she could yet steal the top prize in this ‘Rhum.’

“Everyone is calling me an outsider – or even one of the favourites – which has changed my approach a little bit,” said Davies cheerfully while taking a break from her preparation at the home she shares in Brittany with her partner, and fellow Routre du Rhum-Destination Guadeloupe competitor, Romain Attanasio.

“But mostly it has given me the confidence to go out there and send it. Having said that I am approaching the Route du Rhum realistically,” she adds. “In the races we have done so far not all the top competitors have been there, so I think it will be very hard to get on the podium but not impossible if I sail well.”

This race marks a return to solo ocean racing for Davies for the first time since 2012 but she believes she has come back to it an improved racer after her experience leading a team in the Volvo Ocean Race. “It feels brilliant to be back – the IMOCAS are brilliant boats and it’s nice to be back single-handed sailing,” she said. “I admit I was pretty nervous at the beginning of the year because I knew I hadn’t been racing solo, let alone in a powerful IMOCA, so I really put the focus on my racing and making sure I could get myself back up to a respectable level of single-handed performance.”

Davies has got used to sailing against Attanasio as the pair go off racing leaving their seven-year-old son, Ruben, in the care of his grand-parents. She says Ruben loves the sailing world and enjoys computer game racing and talking about all aspects of his parent’s campaigns. Indeed his parents are remarkable people – the only couple who have both managed to finish a Vendee Globe. “It’s quite unusual in the sailing world,” says Davies with some understatement, “there are a few couples around but I don’t think there is anyone else who have both achieved a Vendee finish and we are both aiming for the next Vendee too.”

And that is another important aspect of this race for Davies who will want to ensure that she makes it Guadeloupe in one piece and thus complete her qualification for the 2020 Vendee. In the meantime her anxieties centre around the start off Saint Malo and the sheer number of boats, plus spectator craft that will make the first few hours of the Rhum very tricky for single-handers in powerful boats.

“The issue I am most scared about is the startline because I don’t think I have ever been on one with 122 other boats,” she said. “We’ve seen in the past that people’s races can be ruined by an accident at the start involving spectator boats, so I will be very happy to get away cleanly.”

Then Davies will be looking to get through the rougher weather in the early stages without incurring damage. “In the past we have always had to go through some gnarly weather exiting the Channel and crossing the Bay of Biscay in November, so it is all about respecting that first part of the race and then being able to put on the turbo mode once you’ve got through all those obstacles,” she said.

Davies is a happy camper and not just because she is loving her sailing. The other key ingredient is her sponsorship programme for this campaign and the Vendee Globe which follows it. Her boat is being used in an innovative way to promote a remarkable French charity that brings children with heart conditions from the developing world to France for life saving surgery that they would otherwise not have access to.

Davies, a Cambridge graduate in mechanical engineering, regards it as a great privilege to be the flag-bearer for the campaign and to be working with commercial sponsors who have donated the key display areas of her boat to allow the charity to dominate the visual impact of her red and white IMOCA.

“We are all there to support an organisation that is saving lives and children’s lives – it brings everyone together around the project and it is an amazing experience for me to be part of it,” said Davies.