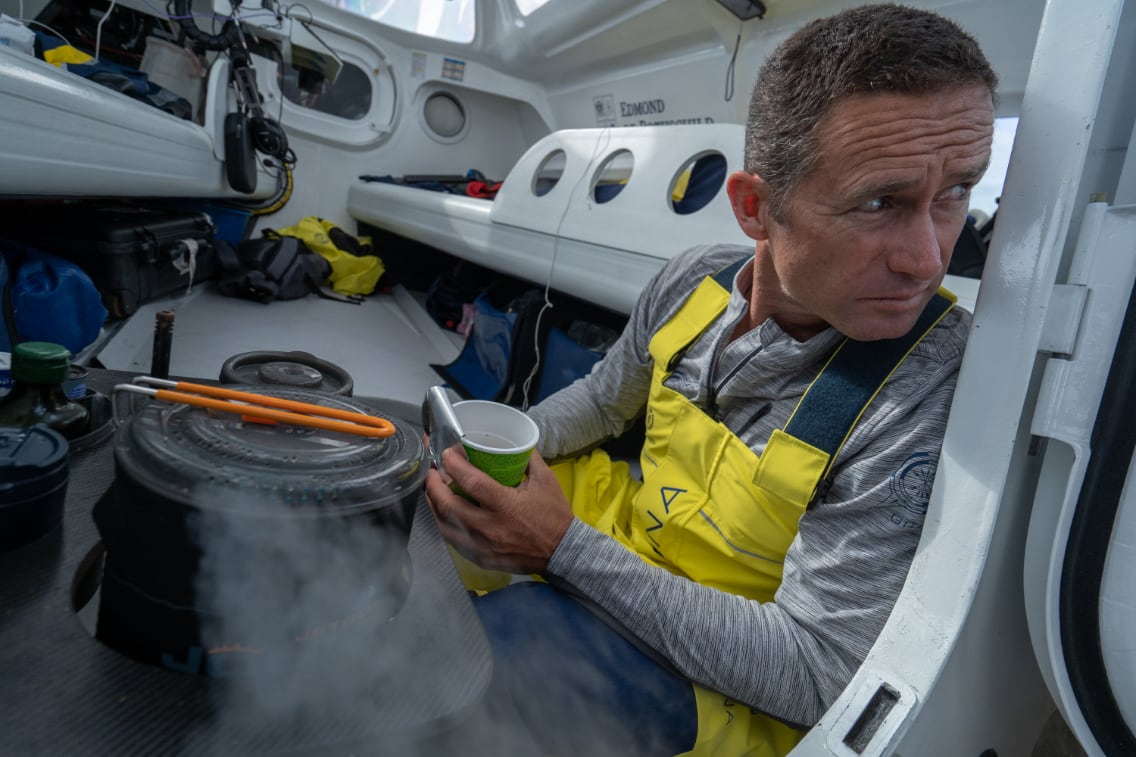 In three days, at exactly 13:00 GMT, the Route du Rhum – Destination Guadeloupe fleet will set sail from offshore Saint Malo. The race start is approaching then and the weather patterns are taking shape. Indeed, this 2018 edition is revealing her true colours a little more each day and some 72 hours before the one hundred and twenty-three solo sailors take off, the latest forecasts are indicating a tough introduction to the race after a quick but rainy start off Cap Fréhel.

Competing in the Ultime category, at the helm of the Maxi Edmond de Rothschild, Sébastien Josse is gradually getting into race mode. On the dock in Saint Malo, the giants are grabbing the attention, impressing the crowds by their massive dimensions, so this is the perfect opportunity to unveil a little more about life aboard these carbon monsters and the physical commitment they require of a solo sailor.

Measuring 32 metres by 23, which equates to a surface area on and below deck of nearly three tennis courts, the space devoted to the living cell on the Maxi Edmond de Rothschild, doesn’t even represent 5% of the whole thing.

The minimalist skipper’s cabin, with a floor extending out on the same level across the cockpit, is strangely reminiscent of a plane fuselage. This streamlined living space designed by the Gitana design office and Sébastien Josse, is ultra-economical above all, with one objective in mind: reducing the windage (the air resistance of a moving object) whilst optimising the aerodynamics of the boat via the ‘downforce effect’ familiar in Formula 1.

Though the surface area of the trampolines is 210 square metres, and the aerodynamic elements exceed 60 square metres, the skipper will essentially confine himself to ‘just’ 6 square metres for his cabin – less than the worst attic rooms in Paris – and 18 square metres in the cockpit. These figures naturally don’t take into account the 1.80m regulatory height dictated in French properties, because this headroom simply doesn’t exist of course on the Maxi Edmond de Rothschild.

Sébastien Josse doesn’t take umbrage about this fact, quite the contrary: “We’re focused on optimising the fundamentals, namely operating the foils and simplifying the manœuvres and boat handling, all of which influence the piloting. Since the launch in July 2017, the ergonomics of my cabin is not something we’ve even touched on, bar the installation of a watch seat.” He adds: “The Route du Rhum will last around six days, so this will do very nicely as it is! I already know that I’m going to be living outdoors 24/7, and will hardly ever go down below.”

However, at the tip of this white lacquered shelter portholes enable panoramic views across Edmond de Rothschild, a large computer screen with ‘sea views’, a moulded stool, a minimal bunk to starboard, a tiny galley and finally composite fabric pockets enabling a set of cutlery to be stored, together with a toothbrush, the essential head torches and a few tools.

It’s pointless looking for a water supply point or heads. There are none! To be clear, and weather permitting, the solo sailor will just be heating up dishes specially designed according to his wishes by Julien Gatillon, 2 Michelin star chef of the Le 1920 restaurant in Megève. The rest of the time, Sébastien Josse is protected under the cuddy, vitamin bars, water and beverages within reach… akin to the famous Solitaire du Figaro. However, it’s well known that for these ‘monk-come-soldier’ sailors, singlehanded on such machines, comfort comes a long way down the list after ergonomics and functionality.

The cockpit of the Maxi, fitted out by Ariane and Benjamin de Rothschild, is slightly reminiscent of an airliner, even though it’s a giant trimaran boasting 650 metres of sail area in downwind conditions. Gimballed computer screens close to the carbon steering wheels, an incredible number of hydraulic controls, monstrous winches enabling sails to be hauled on using coffee grinder winches, hundreds of metres of lines and sheets… all these elements are perfectly organised within arms’ reach and protected beneath a futuristic cuddy.

The skipper will helm when the weather is suitable and he can also activate one of the small opening roof hatches and adjust the toe clips to ensure he has an optimal view across the bows of his boat. Though good seamanship and feeling obviously prevail, along with speed and course, angles in relation to the wind and cartography, under autopilot, the skipper of the Maxi Edmond de Rothschild keeps a constant check on the boat using three on-board indicators and a graphics base to monitor the load peaks, the battery level, the tensions and also the distortion of the structure.

On this highly complex machine, the efforts for a single man are colossal. For example, the compression at the foot of the mast is 65 tonnes, whilst one of the primary winches can withstand loads of up to 9 tonnes. And having these detailed facts and figures day and night are absolutely essential for sailing safely at very high speed.

“I hardly helm at all,” explains Sébastien Josse. “I spend most of my time turning winches because even a small manoeuvre calls for massive physical effort.”

If all goes well, a tack requires around twenty minutes of intensive effort whilst hauling on sails, canting the mast, raising one foil and lowering the other… A sail change is also highly demanding of course, the genoa weighing 150 kilos and the mainsail 250. “However, that’s the price you pay on this fabulous flying boat,” concludes the skipper.

The main manœuvres in figures

On the Maxi Edmond de Rothschild, anticipation is crucial and precision as much as swift execution and sequencing of the manœuvres are very important in terms of performance.

At a steady pace, Sébastien completes 60 turns on the grinder in 1 minute.

The timings comprise: handling and trimming of the sails as well as managing and adjusting the appendages and the rig.