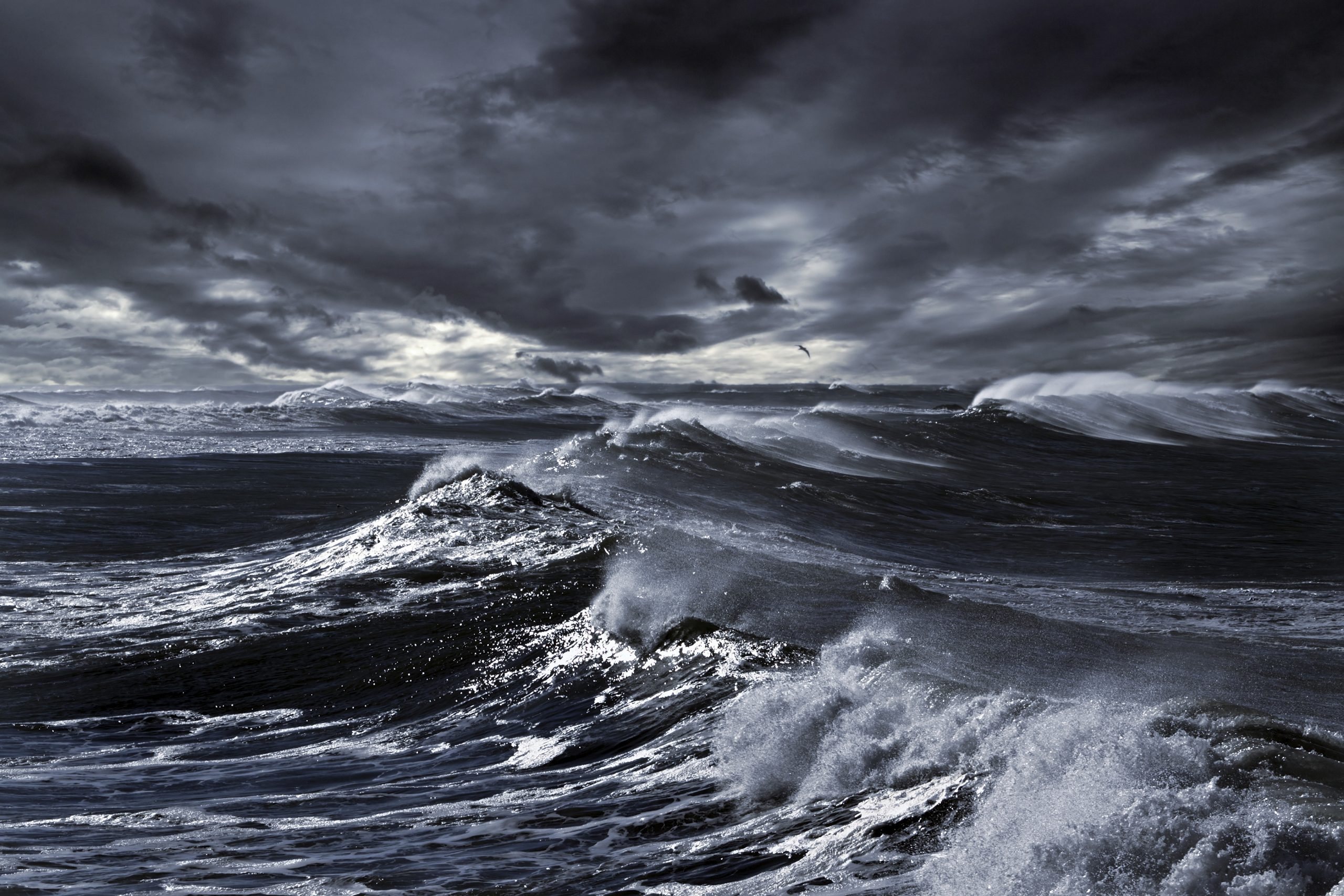 The weather picture in temperate latitudes can get very messy. Between the southern edge of the sub-tropical ridge (STR) and about 60 degrees south there are several major drivers of local weather locked in a contest for dominance.

The principal weather feature in this area of significance to the cruising sailor is the frontal depression (FD). These regularly spin off the PF, move in a characteristic way, have an identifiable life-cycle and are frequent enough to be a regular feature of cruising anywhere between Perth, around the southern coasts, up as far as the NSW/Qld border. See Diagram 1.

I do not envy the lot of the professional meteorologist. I have the easier life of an enthusiastic amateur. My father developed a keen interest in weather trying to stay alive while airborne during World War Two and I had an interest kindled in our backyard at night as he pointed out the stars of interest to navigators, as well as explaining the weather during periods of cloud and wind that occasionally obscured them.

There are many books on the subject but, alas, being couched in the arcane terms of gas constants and the hydrostatic equation, most have no value to the cruising yachtie sitting in an exposed anchorage, contemplating a dodgy-looking sky, with a drink in his hand and an uneasy feeling in his guts.

The yachtie, in his down to earth way, thinks of weather and that is that. If adequately informed he could be thinking that it might be a smart move to change anchorage in case this uneasy calm precedes a wind shift that would change his circumstances to a threatening lee shore. Better to act soon, in the calm and daylight, than in the middle of the night when all hell has broken loose and it is as black as a dog's guts on deck.

The key to understanding weather in the temperate zone is the weather map. Ideally this is produced using the latest mathematics, crunched by super-computers and delivered with the maths done by the rocket scientists and some of the art left to us.

Fortunately, weather maps are written in an international language that transcends political boundaries. Even when cruising foreign waters, though you may not understand one word of current affairs in the local newspaper, you can get much information from the weather map.

Synoptic charts in graphic form are the most useful, but they can be built up in a much more ad-hoc fashion from voice transmissions gained over the HF or VHF radio: “high, central pressure 1030 mb is centred on X deg. lat., Y deg. long., extends a weakening ridge to the NW. A low, 1006 mb., is centred at Z and W, deepening and moving SE. A front lies along the coordinates A,B,C and D and is moving E at 20 knots.” etc.

This can be updated every 24 hours to give much useful info.

A few rules of thumb and access to regular weather maps allow a great feeling of comfort and control. Not over the weather, but over its effect on you, which amounts to almost the same thing. Particularly when conditions become adverse to your comfort or itinerary, as they will regularly do.

In the southern hemisphere the atmosphere circulates clockwise around lows and anti-clockwise around highs. At sea, wind blows nearly along the isobars on a weather map but slightly across them, at about 20°, from the high side to the low.

Fronts are often described in detail in forecasts and are a topic that must be specifically addressed. A front, by itself, is nothing more than the interface between two air masses with different characteristics of temperature, moisture and density. These may be immobile and innocuous. However, fronts are often associated with FDs and they can be vigorous and very mobile.

I find the Bergen model the most user friendly explanation of how FDs arise.

The belts of high pressure that comprise the STR, when over the sea, are areas of warm, moist air. The STR goes all the way around the world near 30°S. During winter it moves north, to about 25°S and south in summer, to about 40°S.

Toward the poles, away from the STR, are the infamous westerlies of the SAM, which is a band of low pressure. Near its southern border is the polar front (PF) with very cold, dry air to its south. The combination gives rise to a semi-permanent, semi-stationary front between these two air masses. See diagram 1A.

The PF is an area of strong frontal conditions where warm moist air and cold dry air do not like to mix. The PF is also a line of strong wind shear, which makes it highly unstable.

If a strong pulse of warm, moist air from the STR intrudes to the south, that air will tend to rise because of its much lower density. The more dense air of the cold polar air mass will spiral clockwise in to fill the void created by the sudden lowering of atmospheric pressure at the tip of the intruding warm air. This is the nucleus of a new FD.

This seed acts as a gigantic vortex: sucking warm, moist air into it, through the warm sector, spiralling it aloft; leading to condensation and precipitation on the way up, releasing latent heat, amplifying the vertical motion and spinning out and away at the top, producing the ‘mare's tails’ cirrus clouds that are a classical sign of the approach of such a system.

Once occluded, the FD will steadily weaken, or fill, while moving toward the relevant pole. This usually takes about seven days.

Cold fronts are important to mariners in the vicinity because, as they pass, winds can be very strong and direction can shift suddenly, with high seas and poor visibility due to rain and spray.

At its most active, with a wedge-shaped warm sector, the centre of the FD will move parallel to the isobars in the warm sector and if we imagine being at point ‘T’ and watching the changes as the front moves over us, the stages of the passage of a front and its significance to mariners will become apparent. See diagram 2 in the breakout box. Remember, the diagram looks as if the observer is moving but it is in fact the system that moves.

I find it useful to think of the westerlies of the SAM as an elongated low pressure system with east moving active cells embedded in it and a stationary cold front trailing behind the active cells, facing the STR. Thus, a new FD can be envisaged as a secondary to one of the embedded cells, moving toward it in a curving path, eventually becoming the embedded primary itself. The process can thus be seen as a continuum rather than a singular event.

With a steady input of basic weather information the observer will be able to formulate specific expectations of the weather in a frontal depression within his locality.

The yachtie's task is easier than that of the professional who is trying to summarise a much larger area for the next 24 hours, such as Coolangatta to Double Island Point, a distance of hundreds of kilometres. Frontal depressions are of finite size and the considerations that make the pro's necessarily expansive summary need not bother the yachtsman who is only interested in what is going on within 20 nautical miles of his location.

As his skills improve, the self-interested amateur should spare a kindly thought for the long-suffering pro and pause with sympathetic understanding for him, who is the butt of everyones’ jokes: applauded by few and appreciated by none.

There is a saying in Melbourne: “don't like the weather? Wait a minute.” This could, with equal justification, have arisen anywhere between 35 and 45 degrees south.

Rarely will the fluctuations go from benign to malignant, as happens in the tropics during cyclone season, but it can get nasty enough.

It is in temperate latitudes that sayings such as: “gentlemen sail off the wind” find their origins. In any week the wind is likely to blow for some while and with some strength from every point of the compass. In such areas you can wait in the expectation that winds favourable to your purpose will turn up before too long.

Compare this with the dilemma of the tropical cruiser, wanting to come south from Lizard Island or further up Cape York to Brisbane, who has no such luxury.

However, with temperate variation comes a caution. Rarely will the tropical sailor have to shift anchorage in the middle of the night. Any adverse wind is likely to be of  short duration, such as the out-flow from a thunderstorm.

The passage of an active FD can be serious grief indeed for the unprepared sailor. Requiring arduous, uncomfortable and often dangerous feats of seamanship.

All the more important then, that the sailor who conducts himself in areas subject to the vagaries of frontal depressions does so having the means to gather meteorological information, the wit to interpret it and the foresight to act on it when  circumstances demand.

Better a planned and orderly, tactical withdrawal to safety than an undisciplined rout in the midst of utter chaos.

Rules of thumb for temperate zone FDs: Intensifying or weakening?

Weather features of the passage of a FD

‘Mares tail’ clouds herald the approach. These wispy cirrus clouds are the out-flow at the top of the system, 10,000 metres high. They can also create a ‘ring’ around the sun. Wind is light and backing. Barometer falling.

Overcast at altitude increasing, Ring around the moon and sun, which is refraction through ice crystals in the high stratus and cirrus clouds. Bar falling, temperature and humidity rising. Possibly some drizzly precipitation.

Warm with broken cloud, bar steady, light wind tending to increase and an unsettled feel to the weather. Warm moist air flows into the warm sector and rides up the back of the slowly advancing cold air left over from the early stages of the ‘wave’ formation. See diagram 3a.

Cloud mass approaching from the W, wind increasing, bar falling and at a progressively faster rate. With the passage of the front wind fresh and squally. Hot at first, then suddenly backing substantially with a precipitous drop in temperature. Barometer spikes down to its lowest. Cumulonimbus clouds with thunderstorms. Becoming cool, with line squall conditions and showers of rain.

Squalls and precipitation decrease, bar up, wind steadies and eases, slowly backing; clouds tend to become fluffy ‘good weather’ cumulus. During the transition from T.4 to T.5 there may be multiple apparent frontal passages as the whole may comprise several lines of instability each of which may mimic the passage of the front but on a smaller scale. After the passage of a front, if the bar climbs initially and then starts another determined fall, with a veering wind, the approach of a post-frontal trough should be suspected, which is of great significance as the weather associated with these occasional phenomena can be extreme and it is well to be alert for its possible existence. The typical track of a frontal depression is quite characteristic. Initially the centre of the FD will move east and once occluded, to the southeast as it decays and fills.