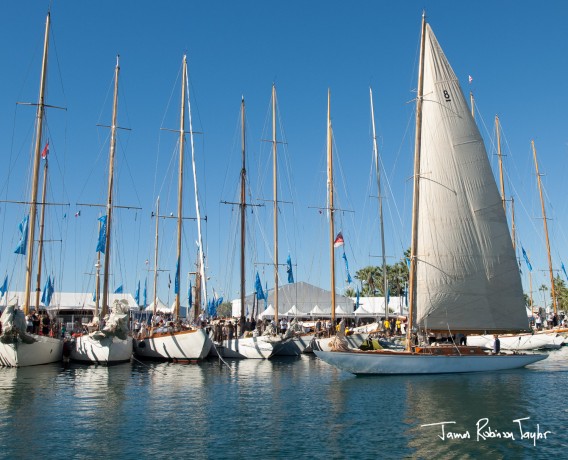 Thursday, day 3 of the Régates Royales de Cannes has started with a full cacophony of horns, bells, sirens saluting Coeur Vaillant docking out. The 8MI owned by Philippe Monnet left the harbour under mainsail only, her crew standing in line for a very special tribute to Florence Arthaud, hundreds of sailors on the bows and spectators on the quai. It was a very emotional moment to say goodbye to the legendary French female sailor who was killed in a helicopter crash earlier this year.

The Régates Royales, launched back in 1929 to honour King Christian X of Denmark, today also welcomed a special guest: his descendant and keen racer Prince Henrik, who was invited by Prince Albert of Monaco on board the 15MI Tuiga

The second day of racing, after yesterday's forced stop, at the Régates Royales-Trophée Panerai, represented an excellent opportunity for these powerful and stunning boats to show all their potential: a south-westerly of around ten knots on a little over twenty mile long coastal race. Upwind, downwind, reaching: all it takes for the crews to deploy their gaff sails, spars, jibs, staysails, genoas, balloons, spinnakers, gennakers…

Once completed the first lap, the breeze started to pick up and shift and those who were not swift enough had some troubles. The gaff cutter Viola broke her mast just under the spreaders: everyone safe on board but some minor collateral damages to sort out.

For the rest of the fleet, the stronger breeze meant a faster pace, especially for the most experienced crews, like Marigold's, the oldest racing gaffer (Nicholson, 1892) in the fleet who won with a nice margin. With the wind rising to twenty-plus knots and the chop increasing, some decided to take it easier.

The huge J Class J Shamrock V earned line honours once again, only to be beaten in corrected time by the Dick Carter designed Helisara. In the >15 metre Vintage Marconi class, victory went to Cholita, while in the bigger Marconi division it was Manitou to cross in first, ahead of Skylark of 1937. The finish between Moonbeam IV and Elena, the biggest yacht on the water, was close and spectacular. Moonbeam IV, skippered by Mikael Créac’h took home its second consecutive win in the Big Boats division. In the Vintage class the Olin Stephens designed Maria Giovanna II also scored a win.

The highly competitive Dragon fleet had two races today. The first started in the early afternoon with a nice south-westerly breeze of a dozen knots on a windward/leeward course, the perfect playground for the 1929 one-designs to speed downwind, using their spinnakers in “kite surf style”.

Conditions were particularly suitable for the Russian crews, who had not started the series on a high. Anatoly Loginov (Annapurna) scored a win in the fourth race ahead of his countryman Vasily Senatorov (Even Better) whilst Victor Fogelson (Sunflower) finished in sixth. Germany's Michaël Schmidt (M3) finished in fourth behind the other German crew skippered by Michaël Zankel (Powwow).

The starting signal for the second race of the day was fired in a south-westerly of around 15 knots. On the windward/leeward course, after two and a half laps, the first to cross the line was Martin Payne (Bear) from the UK, with the slightest margin over Ivan Bradbury (Blue Haze) and French Stéphane Baseden (Outlaw).

As a result the overall top position is still in the hands of Michaël Schmidt (M3) with a nine-point advantage, followed by a triplet of Britons (Blue Haze, Jerboa, Bear) and Germany's Michaël Zankel.

Tomorrow is the last racing day for the Dragons at the 37th Régates Royales and the final podium will probably be decided among these five teams, with both Italy's Giuseppe Duca (Cloud) and Russia's Anatoly Loginov (Annapurna) already out of contention, 30 and 33 points behind the leaders respectively.

A prince at the Royales

Prince Henrik of Denmark is a faithful guest of the Régates Royales-Trophée Panerai, usually racing on his Dragon White Lady (DEN 166). His Highness took a sail today on Tuiga, the 15MI representing the Yacht Club de Monaco.

The Régates Royales de Cannes were created to honour the King of Denmark.

“King Christian X used to own a villa in Cannes where his family spent some time, and raced in the Bay with Madame V.G. Graae's 6MI Dana. The local authorities, the Société des Régates de Cannes and the International Yacht Club were granted permission by the King to call their week-long racing event, first organized during the spring of 1929, the Régates Royales. Unfortunately after his death, the tradition stopped. When I came back to Cannes, sailing in the 6MI class and later on a Dragon, the city asked me if their autumn series could be named Régates Royales once again, and I happily agreed.”

You have been racing in the Dragon class for many years, especially here in Cannes.

“Some forty years ago I used to sail in another class, the Klar. I switched to the Dragon class when it ceased to be an Olympic boat. This relaunched the Dragon in my country, because before it was almost a professional-only class. Suffice to say there were only three boats back in 1981. I'm still the International Association vice-president, but unfortunately I no longer race. At my age one knows when to stop…” Says the Prince with his usual irony.

Is sailing popular in Denmark?

“It's a sailor's country because we are surrounded by water. We have a strong maritime heritage and very good sailors. Danes have always performed well at the Olympic Games, like four time gold medallist Paul Elvstrom or triple champion (two golds and a silver) Poul-Richard Hol-Jensen.”

Sailing seems to be a family tradition for you, right?

“Since the times of King Christian X, not really. But KingJuan Carlos of Spain has been racing a lot and my brother-in-law, Constantin of Greece won a gold medal in the Dragons at the 1960 Rome Games.”

You're back to Cannes racing .

“Prince Albert of Monaco has invited me to be on board Tuiga. It's my first time on a 15MI, and the weather conditions look fantastic today. If they ask me to take the helm, I will not say no!”

Focus on the “Eights”…

There are several 8MIs moored at the quai Laubeuf this year too. These boats have been a regular presence at the Régates Royales, and this year the class is represented by France (Camatte, 1937), Carron II (Fife, 1935), Aile VI (Arbaut, 1928), plus Cœur Vaillant owned by Philippe Monnet, which today paid tribute to long-time friend Florence Arthaud.

The class is still very active and derives directly, like the 5.5, the 6 and the 12MI, from a metric rule first created in 1906 in London. At that time yachting was fast growing, but almost every country, region or yacht club was adopting a different rule, very specific to local conditions. There were very few international regattas, apart from those on the Swiss lakes or in the South of England. This so called “restriction rule” is based on a number of measurements to guarantee similar performance, without being one-design rule.

In 1901, the New York Yacht Club asked Nathanael Herreshoff to create a new international rule and it was during a meeting held in London in 1906 that the International Metric Rule was defined. The rule will give birth to no less than ten classes, from the 5MI to the 23MI.

Three years later there were 195 Metre boats taking part regularly in regattas all over Europe, and the Americans soon followed suit. From 1907 on, the best naval architects devoted themselves to the international metre rule and particularly to the Eights. Between 1908 and 1936 when the class was Olympic, all the best international designers like Scottish Alfred Mylne and William Fife, Norwegian Johan Anker and Bjarne Aas, British Morgan Giles and Charles Nicholson, American Olin Stephens, French Thierry Guédon, François Camatte, André Mauric produced their Eights.

The 8MI have traditionally been day-boats for blue bloods and magnates and the Spanish, Norwegian and Swedish royals have all raced on them. The class has always been very popular among unconventional owners having the means to afford an 8MI, like the Rotschild family. Some of them were particularly famous like the Duchess of Windsor in the UK, Baron Alfred Krupp von Bohlen in Germany, Swedes Marcus Wallenberg and Carl Siemens, King Alfonso XIII of Spain or French lady sailor Virginie Hériot. Many designers also owned their own Eights: William Fife, Charles Nicholson and Glen Coats. The New York Yacht Club also supported the class, in 1928 commissioning eleven boats from the shipyard Abeking and Rasmussen…

And the prize goes to…

The first ever prize for most elegant boat at the Régates Royales has been presented to the Marconi sloop Serenade, a Nicolas Potter design built in 1938 for British owner Hugues Boullenger. The 1908 gaff cutter Viola was awarded second place and third the 1934 ketch Adria, owned by Rachid Elmssalhi. The famous Palynodie II, designed by Olin Stephens in 1962 for Marseille's mayor Gaston Defferre, and now owned by Patrick Teyssier, was also awarded a special prize.

The Azores High is spreading from the Atlantic to Europe's mainland, meaning warm and sunny weather for the rest of the week and the remaining two days of the Régates Royales-Trophée Panerai. On Friday conditions should stay excellent, with a light west-south-westerly in the morning, increasing to 8/12 knots in the afternoon. The classics will have the chance once again to set all their sails and the Dragons will have more action-packed races.