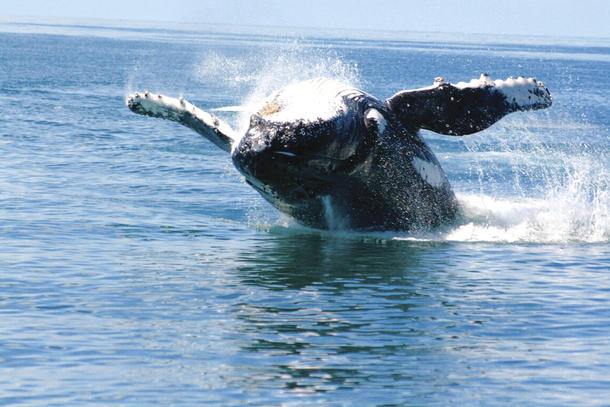 During autumn and spring in southeast Australia, cruisers head north for the winter and head south again for summer.

At the same time, humpback whales are also beginning their annual migration between their summer/winter feeding grounds. With increasing numbers of both cruising yachts and whales migrating along the east coast of Australia, encounters are becoming more common.

Between 1835 and 1845, 75 per cent of Australia’s southern right whale population was wiped out. Some
years later, in 1952, the industrial scale shore-based whaling of humpbacks began at Tangalooma, followed in Byron Bay in 1953.

By 1962, commercial whaling had reduced the number of humpbacks migrating along the New South Wales and Queensland coast to approximately 200 whales, leading the International Whaling Commission to ban their hunting in the Southern Hemisphere. The focus of whaling in Australia turned to sperm whales and continued until 1978.

Public pressure and bipartisan political support led to the end of whaling in Australia and the introduction of the Whale Protection Act 1980, since replaced by the EPBC Act 1999.

By 1984, the number of humpback whales migrating along the east coast had crept up to 600 but sightings were still relatively rare. Thirty years later humpback numbers are increasing annually by 10 to 14 per cent and it is rare not to see one during the winter months!

The 2014 migration saw an estimated 19,000 humpbacks along eastern Australia. As whale numbers increase, so does the likelihood of close encounters with cruising yachts.

Whales and dolphins belong to the Order Cetacea, this is further divided into two subgroups; toothed whales
and baleen whales.

Toothed whale species found along the east coast range from dolphins and orcas to large sperm whales. Baleen whale species include the giant blue whale, fin, sei and humpback and the smaller minke.

There are 45 species of dolphins and whales that either live in, or migrate through, Australian waters. Of these, approximately 30 species are recorded within the Great Barrier Reef Marine Park (GBRMP).

Humpbacks are perhaps the best known and most common whale that cruising yachts are likely to encounter. Usually black on top with white undersides, humpbacks travel close to the coast. As a result they are more likely to be seen by coastal cruisers. Their gymnastic displays seem at odds with their enormous size and weight, a fully grown humpback whale can weigh more than a fully loaded semi-trailer and even a small calf can weigh two tonnes. The sight of a humpback breaching nearby is not something easily forgotten!

Protected in Australia since 1935, southern right whale numbers, so called because they were the ‘right’ species to hunt, are also steadily increasing. Sightings of this species are common around Sydney Harbour, Broken Bay and the NSW Central Coast where they arrive in early winter to calve.

Southern rights are a large (14 metres and up to 80 tonnes) species and can be easily distinguished by their broad back and lack of dorsal fin. They are dark grey or black with an enormous head with two separate blow holes that produce a distinct V-shaped blow. Southern rights may be seen along the southern Queensland coast at times.

A smaller species that cruising yachts may encounter is the minke. This elegant whale visits the northern GBRMP each winter. Much smaller than the humpback, at eight metres long and weighing several tonnes, it is also very inquisitive towards boats.

Although technically a dolphin, and more likely to be encountered in southern regions recently, orcas (killer whales) have been turning up in the waters of southern Queensland.

An orca pod made national news in 2013 after several whales stranded on a sand bank in the Great Sandy Strait. Unfortunately three of the stranded whales died, however another five were successfully rescued and seen heading north into deeper waters of Hervey Bay the following week.

In early April of this year there were unconfirmed reports of a pod of 20 orcas near Fraser Island and a confirmed sighting of 15 orcas at Fog Bay in the Northern Territory.

With growing numbers of humpbacks migrating along the east coast, it could be expected that sightings of orcas will also increase.

What to do if you encounter whales

While we all love to get as close as possible to marine mammals, this can cause stress, particularly to mothers with calves. This in turn may place a vessel in danger.

In Australian waters, regulations are in place to minimise the impact of human/cetacean encounters. Coastal waters, out to three miles, fall within the jurisdiction of the relevant state (Qld or NSW) and offshore from three miles is regulated by the Commonwealth. Recently, however, state regulations were amended to provide consistency with Commonwealth marine mammal regulations.

Under these regulations vessels must not approach any closer than 100m to an adult whale and 50m to any dolphin. If sighting a whale with a calf, vessels must stay 300m away.

Personal motorised water craft, (PWCs, for example jet skis) are considered ‘prohibited vessels’ under the various state and commonwealth legislation. Prohibited vessels must stay 300m from any whale or dolphin.

In addition to these prohibited distances are ‘caution’ zones. This means a restricted area with a radius of 300m for a whale and 150m for a dolphin.

No more than three vessels at a time are allowed within a caution zone and vessels must move slowly and create no wake.

Within the caution zone for a cetacean (other than a calf) the vessel must operate at a constant slow speed and in a manner that consistently minimises noise. The vessel must not drift closer to the cetacean than 50m for a dolphin and for a whale 100m.

If the whale shows signs of being distressed, the vessel must withdraw immediately from the caution zone at a constant slow speed. Signs of disturbance include regular changes in direction or speed of swimming, hasty dives, changes in breathing patterns, changes in acoustic behaviour or aggressive behaviour such as tail slashing and trumpet blows.

If a calf approaches a vessel, placing it within the caution zone, the vessel must immediately stop, turn off the engines or disengage the gears, or withdraw from the caution zone at a constant slow speed.

Marine mammals should not be approached from behind or head on but rather from parallel and slightly from the rear.

When moving away, vessels should proceed at a slow and constant speed, leaving no wake.

A person must not intentionally feed or attempt to feed a marine mammal that is in its natural environment. This includes throwing food or rubbish near a marine mammal.

As tempting as it may seem, people must not get into the water within 100m of a whale or within 50m of a dolphin. If any cetacean comes within 30m of a person who is in the water the person must move slowly to avoid startling it and must not touch the cetacean or move towards it.

Under the regulations there are specific rules for ‘special interest marine mammals’.

These animals include a morphological or colour variant marine mammal: such as the white humpback, ‘Migaloo’; a female marine mammal that has recently given or is about to give birth; a calf separated from a mother of a group of marine mammals; sick or injured marine mammals.

All vessels must not approach within 500m of special interest marine mammals and jet skis must stay more than 600m away.

If a cetacean approaches you

Dolphins enjoy approaching boats, watching them bow ride is surely one of the great pleasures of sailing.

Whales also seem just as keen to ‘people watch’ as we are to whale watch and regularly approach vessels. The regulations acknowledge this and state that if a whale, other than a calf, approaches a vessel or comes within the limits mentioned, the person operating the vessel must disengage the vessel’s propulsion and let the whale approach. Or reduce the speed of the vessel and continue on a course away from the whale.

Unfortunately collisions between vessels and whales do occur. Anyone accidentally hitting a cetacean must report it.

A more frequent problem is the entanglement of marine mammals in shark nets off popular swimming beaches. In Queensland, sightings of sick, injured or dead marine mammals and sea turtles should be reported to the RSPCA Qld. on 1300 ANIMAL (1300 264625).

In NSW, all distressed and injured marine mammals should be reported to ORRCA on its 24 hour rescue hotline 02 94153333.

At the end of winter, as days lengthen and cruisers’ thoughts drift to home or southern cruising grounds, the whales begin their long journey back to Antarctic waters accompanied by their calves.

If you have not encountered a whale while cruising north there is a good chance you will see one on the return passage. The sight of a young humpback calf practising its breaching next to a patient mother is always cause for delight!

Hopefully having already captured some great shots, it is time for cruisers to put down their cameras and just enjoy the experience.

Within a caution zone there are areas designated as ‘no approach’ zones that boats cannot enter.

For dolphins, the no approach zone surrounds the animal for 50m and extends 150m in front of and behind the animal.