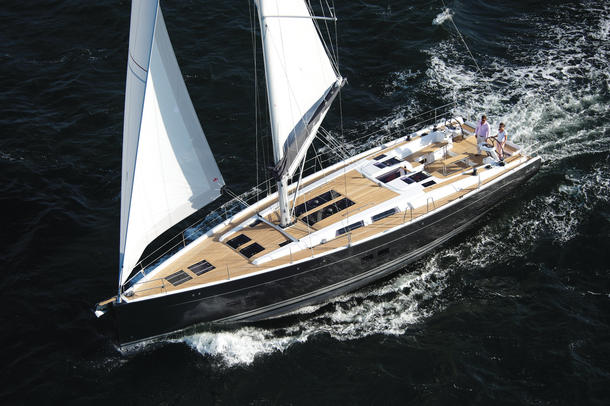 Yacht Share Mediterranean has a Hanse 575 ready to go.

Lounge in the late afternoon with your yacht moored stern to a quay in a tiny port on a Greek Island. The world wanders by and, after a cool gin and tonic, you decide it is dinner time.

Across the quay a taverna beckons. Sit with your family at a table covered with the ubiquitous blue and white check table cloth. The chairs are the standard Greek wood and string variety, a little uncomfortable but who cares. You look back across the quay at your boat, a comforting reflection.

There are literally hundreds of Australian owned yachts in the Mediterranean and Caribbean and some of them have shared ownership. Unfortunately, one of the owners usually draws the short straw to arrange the insurance, berthing, repairs and maintenance; often in circumstances where language, cultural misundertandings and time differences make simple things complicated.

Syndicated yacht ownership for cruisers with the time does make financial sense however, because the capital and running costs are shared and it is definitely cheaper than long term charter. Add a professional manager to the equation and the
whole exercise becomes simple.

Following is an actual example of a new Hanse 575 going to the Mediterranean this summer:

The Hanse 575 has a three cabin owner configuration, rarely seen on charter yachts. It is of high specification including teak deck, electric winches, full air conditioning, and a dishwasher, among a host of other extras. Only the owners of this yacht will use it, it is not available for open charter.

If it was on a single-owner basis the combined annual capital and running costs for this yacht would be close to $150,000 and the boat would probably lay idle for a big part of the year. For example I have a friend who has owned a boat in the Mediterranean for the last three years and he has used it for maybe twenty weeks during those three years. During the rest of the time the yacht has been a pen in the marina in Marmaris or in dry storage.

Another option is to go for a secondhand yacht, with the lower entry cost an understandable temptation. But the reality is the running costs are higher due to deterioration, plus on-selling an old yacht may be more difficult than a newer one.

In another example, I know of a syndicate of owners who bought an ex-charter yacht cheaply but then had to replace the generator and the watermaker. They fitted a teak deck and changed the hull colour from white to blue. For good measure they then added a new set of sails, by which time the capital cost was not much less than a comparable new boat, which by the way would have had a new boat warranty to fall back on.

Another big hassle, apart from the money, was actually getting the work done as the boat was located in
the Caribbean.

Of course with a privately owned yacht, the freedom to move is greater and if the yacht is professionally managed the service is walk on/walk off. If something does go wrong during a cruise there is always someone at hand to help. Then there is the local knowledge of the people from the management company who can assist with itinerary planning and yacht relocation if necessary.

The management company for the afore-mentioned Hanse, Yacht Share Mediterranean, is Australian based and is co-owned by myself and Bob Howie. The most important roles for us is looking after the financial aspects of the yacht and then providing a communication terminal for owners here in Australia.

The yacht partners do not even need to know each other, the fact is all those boat management hassles it takes to run a yacht is managed by us.

Inevitably, in a partnership like this, the question arises about who gets to use the boat when, again this is our management role. In the first year of the contract the first purchaser of a share or shares gets first choice and the subsequent shareholders follow. In the following years the usage is determined by ballot between May and October, the main Med cruising season. There is plenty of good sailing from our base in Turkey outside of the main season so during this period usage is more flexible.

As noted in the table, there is a fee payable for management services set at $5,000 per year per share; it is a small price to pay for peace of mind. All of the service and maintenance work is billed quarterly at cost to the owners. The service arm of the business runs on the back of a long standing relationship between Metin Cakir in Turkey and myself after 30 years in the charter business. The Marmaris base for the yacht is one of the best marine facilities in the Mediterranean and there is no doubt that Turkish workmanship is way up at the top of the table.

Turkey is the country of choice in the Med as a base location because Turkey does not have VAT on yachts for the time being. In the EU the rate of VAT is typically 20 per cent, which adds a serious piece of change to the capital outlay. A yacht can however operate for a season in EU waters without being liable for VAT.

The other tax free alternative is Montenegro, a tiny but emerging cruiser’s magnet cemented between Croatia and Albania. A stunning destination in its own right, Montenegro is just a hop and step from Cavtat, which is the southern port of entry for Croatia.

Again using the Hanse 575 as a live example, the yacht will be managed for a period of three years after which the management contract may be renewed, the yacht could be purchased by one or more of the owners or offered on the open market. The manager of the base in Marmaris is also a charter fleet operator so the third alternative is that the yacht is offered for charter so as to provide an income while it is being sold.

All the owners are free to sell their share during the course of the contract, either to one or more of the other shareholders or to the open market.

Another ocean that attracts the Australian cruiser with good cause is the Caribbean and, as coincidence would have it there is a new Dufour 560GL on its way to the French island of St. Martin to arrive in November for the Caribbean season.