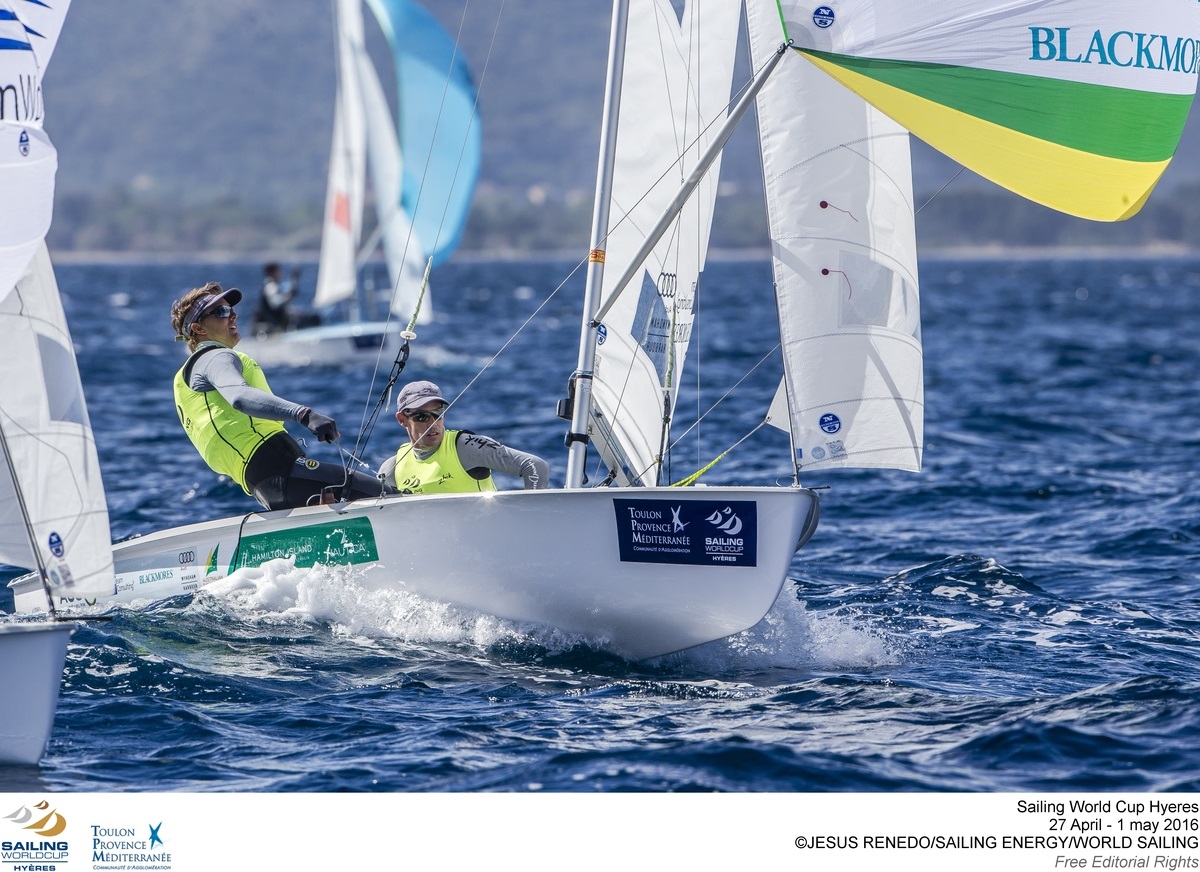 Australian sailors have been very successful in the last two Olympic Games, winning four Olympic gold medals and four silver medals. Now its sailors have started on the competition journey towards the Tokyo 2020 Olympic Games and are looking for more heavy metal results over the next three years.

Burton has set his sights on 2020 Olympic selection but says he will have to battle hard to hold off team mate Matt Wearn, who started his own bid for Tokyo by beating the Gold medallist at the 2016 Sailing World Cup in Melbourne.

The two rivals agree that Australia has one of the strongest Laser squads in the world, with Mitch Kennedy, the under 21 Laser World Champion, Luke Elliott and Jeremy O’Connell also competing in Hyeres, under the watchful eye of coach Michael Blackburn, who coached Tom Slingsby to Gold in London and Burton in Rio.

Burton knows he will be in for a titanic battle over the next four years. He said today, “On his day Matt can be the fastest in the World, on my day I can be the fastest in the world. So we will be pushing each other hard over the coming seasons and we have a bunch of other guys in the squad who sail well in a range of conditions and with our strong team ethos, we all keep improving month by month.”

Many consider Burton to be the favourite for this French event. He won here in 2013, 2014 and 2015 and then came third in 2016 but both he and Wearn say they are coming into this regatta underdone compared to many of their European rivals.

Australia has excellent prospects in the 470 Men’s double-handed dinghy class in Hyeres too. Australia has an outstanding Olympic record in this class, with five gold medals and one silver from Sydney, Beijing, London, and Rio.

London Gold Medallist and Rio silver medallist Mat Belcher is continuing to campaign with his crew Will Ryan.

After his London win with Malcolm Page, who retired, Belcher jumped straight back into competition with new partner Will Ryan, winning more than 40 regattas before taking Silver in Rio.

In Hyeres, today the champion 470 helm said, “I am excited to get back into it and it’s a nice feeling to have. It’s the first time in a long time that 470 Olympic Medallists have continued into the next quad.”

But competition will be strong. The champion Australia duo will have to overcome Rio Bronze Medallists Mantis and Kagialis (GRE) and Rio fourth placed pairing, McNay and Hughes (USA).

Brothers Patrick and Alex Conway who were 30th at this Hyeres regatta in 2016 are keen to better this result in 2017.

49er doubled-handed skiff prospects, brothers Will and Sam Phillips will be sailing in Hyeres, hoping to follow in the footsteps of fellow Australians Nathan Outteridge and Iain Jensen, who won Gold in London and Silver in Rio.

Skipper Will Phillips said, “We were third here last year, behind Olympic Gold Medallists Burling and Tuke (NZL) and are keen to improve on that.”

In the Finn, single-handed heavyweight dinghy class, Oliver Tweddell, finished second in Hyeres in 2016. Tweddell said today, “It looks like a good fleet, it’s an important warm up event for the upcoming Finn Europeans. Right now, I am working hard, focusing on what I need to do to improve to win.”

Peter Conde, Australia’s High Performance Director said in Hyeres today: “We have a small but high-quality representation here in Hyeres this week and after focussing domestically since the Games, this marks a return to international competition for us. A number of our team are preparing for the 2017 America’s Cup in Bermuda right now and some of them are expected to begin Olympic campaigns for Tokyo 2020. Jason Waterhouse and Jake Lilley plan to return to the team immediately after the Cup. We expect that Australia will have strong Tokyo Olympic prospects in a number of classes.”