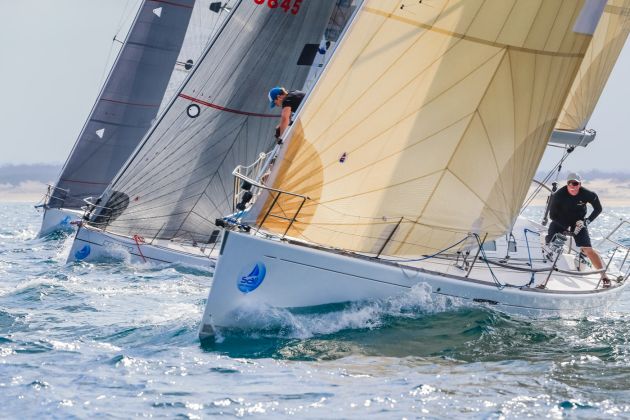 Close to 1,000 sailors are resting on the layday and tinkering on boats ticking off the last of the job list in preparation for a light and tricky Port Stephens Trophy, the top gear second half of the annual week-long regatta.

The light weather boats and sailors are expected to fare well, the forecast indicating 7-13 knot winds ENE to NE tomorrow, Friday April 15, 2016, and 5-11 knots of NNW to NE breeze on Saturday before a southerly change moves on to the track, north of Newcastle. Sunday is where the weather models diverge, one showing light winds below 10 knots and another predicting 20 knots plus.

“We should have good racing, though in lighter conditions than the first two days of the week,” said race officer Denis Thompson. “We always have light weather this time of year; the yachties don’t expect otherwise. The light weather boats and sailors should do well.”

Racing for the first time at Sail Port Stephens is Queenslander Peter Harburg and his Reichel/Pugh 42 Black Jack Too. Harburg’s had a slow climb back from a nasty broken leg after a fall below deck during last year’s Rolex Sydney Hobart yacht race that cost he and the rest of the Black Jack (70-footer) crew, who were in a good position in the fleet at the time, a finish.

“We’ve been running the 70-footer but not doing much lately as I haven’t been mobile,” said Harburg today before the crew headed out for a training run. “We entered Sail Port Stephens with the 42 to keep the crew together and sharp, to keep us working together as a team.

“It’s a competitive little boat I had designed by Reichel/Pugh, who designed Wild Oats X and XI and our first Black Jack. The 42 was built along the same lines and we’ve had quite a bit of success. We aren’t as competitive against the 40 footers like the Farr 40 in the windward/leewards, but in breeze we hold our own.”

And on his recovery Harburg joked: “I still use an aid but I’ll be running marathons soon.”

Matt Allen’s division 1 entry Ichi Ban is carrying a stacked crew as the TP52 team shape up for the Australian Yachting Championship in August at Audi Hamilton Island Race Week against their 52 classmates, including the two-time reigning Australian division A champion Beau Geste (Karl Kwok, HKG).

Ichi Ban’s navigator Will Oxley has been studying the weather models and says, “We will be going with a light air configuration. We are looking forward to really good light air racing with the other TP52s.”

On the Sail Port Stephens IRC fleet Thompson suggested “It’s good to see the numbers and the quality, and particularly pleasing to see Black Jack Too down from Queensland with some top notch sailors on board.”

Outside the IRC fleet sits the bulk of entries, divided into their elected division. Most in the Performance Racing fleet are tweaked up from the Commodore’s Cup which finished yesterday, Wednesday April 14. For the first time at Sail Port Stephens a Super 11 pointscore will be calculated for the entries that fall within the Super 11 parametres.

Performance Cruising is by far the largest division contesting the umbrella Port Stephens Trophy. Their schedule is three passage races whereas Performance Racing is timetabled to complete a combination of passage races and windward/leewards.

Five boats have entered the Sports Boat division. Local Matt Bonser knows Port Stephens’ waters intimately and it will be tough to take one off his Melges 24 crew sailing Bonser’s appropriately named Watch Me.

Four MC38s will race on their own course for the first part of a three-stage season class championship.