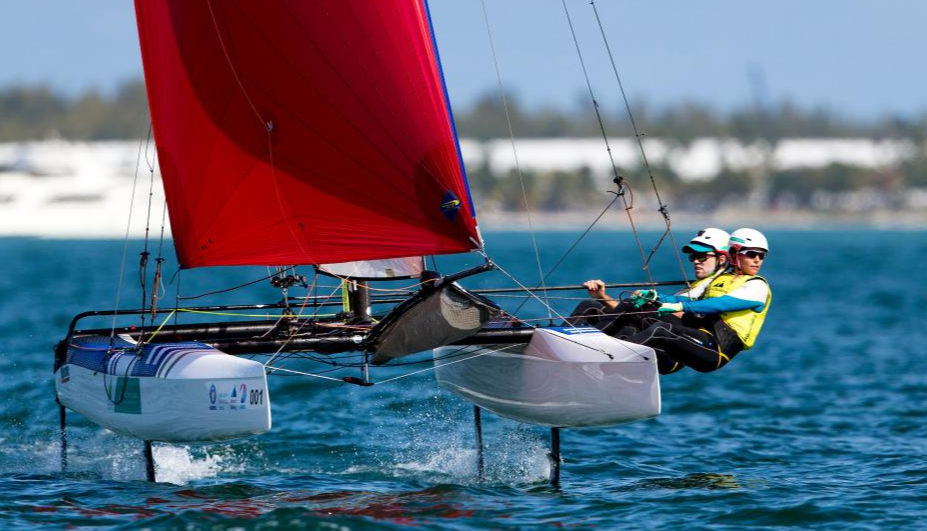 With 18 months until the Tokyo 2020 Olympic regatta, now is the time for medal hopefuls to do an honest self-assessment and figure out what weaknesses they need to shore up before the big show.

For Jason Waterhouse and Lisa Darmanin (AUS), the silver medallists from Rio 2016, one of the areas in need of improvement is light air speed. They came to Hempel World Cup Series Miami looking for the light, shifty conditions that most recreational sailors would rather avoid. To their delight, Biscayne Bay has delivered just what they needed.

“We’re really happy with how we’ve been sailing this week considering the conditions,” said Waterhouse.

“In terms of racing, our main focus has just been consistency throughout the week as in those conditions it’s just so variable with your results. Also we’ve been struggling in the last year with our light air speed and we’ve been trying to focus on improving that. It’s hard to tell in such shifty conditions, but I think we’ve made little leaps in that.”

The Australians started the regatta with a 14th, but eight of their 12 finishes have been inside the top-five and they will head into tomorrow’s double-points Medal Race with a four-point lead.

The Medal Races for all 10 classes will be streamed live on World Sailing’s YouTube and Facebook channels starting at 12:00 local time.

In second place heading into the Medal Race is Samuel Albrecht and Gabriela Nicolino de Sá (BRA). Albrecht finished 10th at the Rio 2016 Games with another crew.

The Brazilian team was leading the regatta until a 14th in today’s first race, but rebounded with a pair of wins.

“We had a very hard first race,” said Nicolino de Sá. “We finished 14th, but at one point we were around 20th. We did not have a clear sight of what was going on on the racecourse.

“Then we sat together, talked about it and decided to simplify things for the next races and it worked. (We focused on) clear lanes during the upwinds mostly, getting out of trouble with other boats and trusting the numbers on our compass.”

If she was disappointed to have lost the lead, Nicolino de Sá didn’t show it: “They (Waterhouse and Darmanin) won the silver medal in the last Olympics and they have been sailing together for quite a while,” she said. “We’re actually very happy to be battling against them. Not sure what to expect yet for tomorrow; we just want to give it our best.”

To hear Waterhouse talk about it, that may be all he and Darmanin can handle, especially if the forecast holds for less than 10 knots of breeze.

“The Brazilians are definitely the quickest in the light breeze,” he said. “We’ve just been trying to sail smart tactically to get around the lack of boat speed.”

Should either of those teams falter significantly in the Medal Race, the crafty veterans and defending gold medallists, Santiago Lange and Cecilia Carranza Saroli (ARG), could take advantage. They are 12 points behind second and 16 points out of first.

A key component of Laser sailor Hermann Tomasgaard’s (NOR) preparation for the 2019 Hempel World Cup Series Miami involved a week at the Laser Training Center in Cabarete, Dominican Republic. Aside from the obvious—tropical mid-winter weather—Tomasgaard went there for the consistently strong winds.

“We had a good group with the British and the Swedish and a lot of hiking, a lot of strong winds,” he said. “That’s maybe the problem you can have in Europe this time of year, you can have a lot of light winds. You get some strong-wind days, but never really for one and a half weeks.”

This regatta, however, has been anything but windy, with just one race that tested the sailors’ abdominal muscles.

Nonetheless, Tomasgaard clearly found something in the azure Caribbean waters because he has been phenomenally fast and unbelievably consistent in some of the most mentally demanding conditions in a fleet where top-half finishes in the gold fleet are often considered keepers.

With two full-fleet races remaining and then Sunday’s Medal Race, Tomasgaard has established a 44-point lead over second place. His worst finish is a sixth. One decent race tomorrow and he will have clinched the gold with two races to spare, a virtually unheard-of feat in the modern Medal Race format.

“It’s been very good,” he said. “Sailing is a little up and down all the time, and this week I’ve had quite a lot of up. I’m just enjoying it right now. I’ve had moments (like this before), but maybe not for as long as now. Now it’s been every race. It’s been good.”

The conditions today were similar to the previous three days, light and shifty.

“It was difficult, very – very shifty – big shifts from both sides,” he said. It was quite light and big pressure differences as well with the shifts. Success required managing a little bit of both.

“We had a left pressure that was really stationary, that you really had to go into. It was in all the upwinds, almost, that you gained a little bit on that left shift, but it was difficult to know how far into it you had to go.”

He also credited a lot of his success to his ability to get off the starting line cleanly.

Should his final few races follow this pattern, Tomasgaard will have put together one of the more remarkable scorelines in recent memory. With 18 months until the Tokyo 2020 Olympics, is he peaking too early? Tomasgaard doesn’t see it that way.

“I’ve been climbing the last few years in the results, and it’s nice to see that the winter trainings are working well,” he said. “So I kind of take that, like ‘OK, we’re on the right track.’ Still, it’s early in the season, and a lot can change from Miami.”

Sam Meech (NZL) is second in the class with 65 points while Rio 2016 gold medalist Tom Burton (AUS) is third and Charlie Buckingham (USA) is fourth.

With a second in the final full-fleet race of the regatta, Alex Maloney and Molly Meech (NZL) put themselves in a strong position going into tomorrow’s Medal Race in the 49erFX. They have a 12-point lead over Rio 2016 gold medalists Martine Soffiatti Grael and Kahene Kunze (BRA) and Charlotte Dobson and Saskia Tidey (GBR). With fourth place 20 points further behind, the medalists are all but locked in. The final order will be decided tomorrow.

Erik Heil and Thomas Ploessel (GER) had their worst result of the regatta in the second of three races in the 49er class. But they won the other two and will carry an 11.7-point lead into the Medal Race. They are guaranteed at least a silver medal; Dylan Fletcher-Scott and Stuart Bithell (GBR) are second while countrymen James Peters and Fynn Sterritt (GBR) are third.

Overnight leader Radoslaw Furmanski (POL) struggled in today’s three races in the Men’s RS:X class, but he’s still at the top of the leaderboard thanks to his strong start to the regatta and a tiebreaker, which positions him provisionally ahead of Pierre le Coq (FRA).

Mateo Sanz Lanz (SUI) is third, just four points back. With just 20 points separating first from 10th, there is the potential for the results to shift around quite a bit in tomorrow’s double-points Medal Race.

It’s equally as tight at the top of the Women’s RS:X class, where two points separate Yunxiu Lu (CHN) in first from Charline Picon (FRA) in third. Katy Spychakov (ISR) is second.

The scoring mechanics of the Medal Race, which is worth double points and also counts as the tiebreaker means those three sailors are effectively tied for the lead. The back half of the top 10 is a little more spread out. Only Zofia Noceti-Klepacka (POL) has a realistic chance of breaking into the medals.

Jonathan Lobert (FRA) and Rio 2016 bronze medalist Caleb Paine (USA) picked up the day’s race wins. Lobert is poised to strike in fourth but Paine only has an outside chance to qualify for Sunday’s Medal Race. He is 17th overall, 13 points off 10th.

Tapio Nirrko (FIN) and Max Salminen (SWE) swapped places at the head of the fleet. But with potentially three races tomorrow there’s a lot of opportunity remaining.

Paige Railey showed again that experience counts, both in terms of time in the Laser Radial and time on tricky Biscayne Bay. She won two races today, finished fifth in a third, and will carry a nine-point lead into the final day of full-fleet racing.

Dongshuang Zhang (CHN) won the third race and is currently second. Anne-Marie Rindom (DEN) is third, 27 points off the lead. Railey is currently throwing out a Black Flag disqualification, which does make her margin for error in tomorrow’s final two races a little narrower than some of the other top sailors.

With an eighth and a third, the Swedish team of Anton Dahlberg and Fredrik Bergström has built a 4-point lead in the Men’s 470. Naoki Ichino and Takashi Hasegawa (JPN) won the day’s second race and moved into second while Jordi Xammar Hernandez and Nicolás Rodríguez García-Paz had the best overall day with a first and a fifth and are now in third.

Fabienne Oster and Anatasiya Winkel (GER) have been a model of consistency in the Women’s 470 fleet. They have yet to win a race, but have finished no worse than sixth.

With six races down, and possibly three more tomorrow before Sunday’s Medal Race, the German team has a four-point lead over Fernanda Oliveira and Ana Luiza Barbachan (BRA) and a six-point advantage over Hannah Mills and Eilidh McIntyre (GBR).

49er, 49erFX, Nacra 17 and the RS:X windsurfer Medal Races will be live across World Sailing’s YouTube and Facebook from 12:00 local time on Saturday 2 February. Fleet racing for the remaining fleets starts at 10:30 local time.