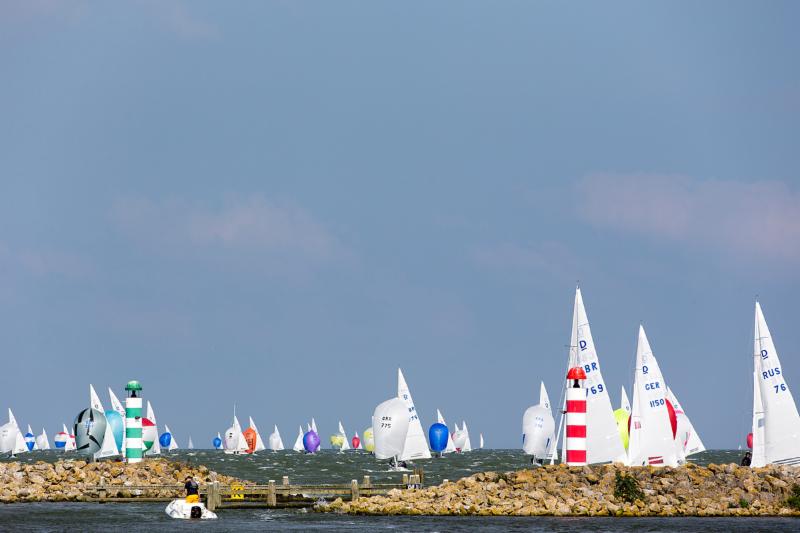 Ninety-five International Dragon keelboats and their crews from across Europe and Scandinavia and as far afield as Australia, Japan, Canada and the United Arab Emirates are converging on the historic town of Medemblik in the Netherlands for the 2019 Yanmar Dragon Gold Cup.

Hosted by the Royal Netherlands Yacht Club and the Royal Yacht Club Hollandia, the regatta will take place from 9 to 14 June on the world-renowned sailing waters of the Ijsslemeer.

The Dragon Gold Cup is one of the oldest and most prestigious trophies in one-design sailing and was first raced in 1937 off Oslo, where Rolf Bilner of Sweden was the inaugural winner.

Held annually, the regatta features the perfect combination of top flight racing, fun social events and the genuine camaraderie for which the Dragon class is famous. This year’s entry list brings together a well-balanced mix of professional and amateur teams, friends and family for a week-long celebration of all things Dragon.

Amongst the other top teams hoping for overall victory will be the current Ranking and European Cup Series leader Grant Gordon from Scotland, Russia’s Anatoly Loginov and Dmitry Samolkin who are third and fourth respectively on the Ranking List, and Portugal’s Pedro Rebelo de Andrade and Hugo Stenbeck of Switzerland who are tied for second overall in the European Cup Series.

America’s Cup and World Match Racing veteran, Peter Gilmour and his Japanese Yanmar Racing Team, will travel from Australia in the hope of becoming the first Antipodean to add his name to the trophy.

Gilmour’s 2019 Dragon season has brought mixed fortunes so far, but despite this he is currently lying in fifth on the International Ranking and will surely be hoping for a consistent and incident free performance in Medemblik.

The West Australian will also be representing event sponsor Yanmar during the week and looks forward to a great sponsor partnership; “Yanmar is one of the world’s biggest diesel engine manufacturers and they love supporting the Dragon class. Their history extends back over 100 years and the Dragon is 90 years old this year, so there’s a great synergy there. We have a terrific regatta planned and we can’t wait to go racing.”

Consistency is without doubt one of the most important factors in Gold Cup success. There are no discards in the six-race series, the courses are very large and challenging and the quality of competitors is quite extraordinary. A successful campaign must bring together great preparation of both boat and crew, detailed campaign planning, superb tactics, exceptional boat speed and just a little luck too.

The field of amateur teams vying for the Corinthian Gold Cup Trophy is particularly strong this year.

Locally, Jan Bakker and sons Dominic and Oliver have high hopes of a good performance in this division, but the likes of Danish Olympic legend Poul Richard Hoj-Jensen, who celebrated his 75th birthday on 2 June, remains a formidable competitor and will give them a good run for their money.

Finland’s Sami Saloma, who finished fourth in last year’s Corinthian Gold Cup fleet, will also be hoping to make it onto the podium this year, as will Belgium’s Xavier Vanneste.

Vanneste is one of a number of sailors who will be racing with family crews. Xavier sails with his sister Anne and their good friend Karl Odent.

At least four teams will be entirely composed of family members, including Quirin, Frederique, Rosalie and Willemijn van Aspert from the Netherlands; Christian, Susanne, Kira-Karina and Marco Hentschel from Germany; Jacob, Ewoud and Hugo Roosjn also from the Netherlands, and the Bakkes.

For others it’s a case of family rivalry. Parents Philip and Nicola and sister Pia Dohse will be racing against son/brother Maximillian, who grew up crewing for his parents but now races his own Dragon to considerable success.

The ladies are well represented in the fleet too with Holland’s Charlotte ten Wolde, Germany’s Nicola Friesen, Finland’s Sara Antila and Britain’s Gavia Wilkinson-Cox all hoping for a top ten finish.

Wilkinson-Cox summed up the appeal of the Dragon fleet well saying, “When I started competing internationally in the Dragon I was about the only lady helm. Over the years, I’ve been happy to see there are now a number of us on the circuit. To me the Dragon offers the ultimate form of sailing. We don’t rely on instruments, its seat of the pants racing, and the competition is awesome.”

Whilst for some the main goal is to go home with a trophy, for others attending the Yanmar Dragon Gold Cup is about the sheer joy of racing Dragons against likeminded sailors and enjoying the wonderful friendships which spring from association with the class.

The après sailing program is of equal importance as the on-water competition and this year the teams can look forward to some superb parties, including the Yanmar Gala Night, which will be held in the beautiful Bonifatius Church in the town centre.

Also adding to the intimate feel of the regatta will be its location in the historic centre of Medemblik and the use of the town’s famous Brakeboer Music Café as its social hub.

The regatta will get underway with a practice race on Saturday 8 June, with Championship racing from Sunday 9 to Friday 14 June. Six races are scheduled and up to two races may be sailed each day.