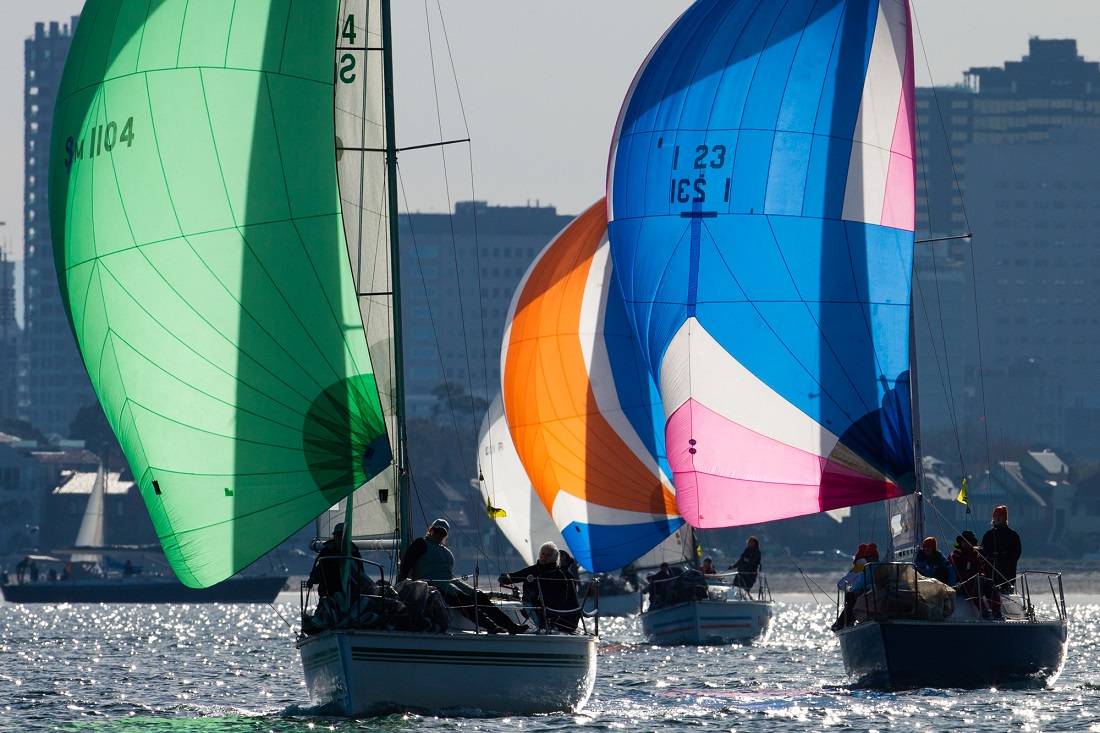 The Australian Women’s Keelboat Regatta (AWKR), hosted by Royal Melbourne Yacht Squadron, got off to a great start with three races held under sunny skies and a mix of conditions on Port Phillip today.

Race 1, and the Katie Spithill skippered M.A.T. 1010, Ocean Respect Racing (NSW), showed their class early in Division 1. The RPAYC team, some of whom were aboard Wild Oats X when she finished second in the 2018 Rolex Sydney Hobart, came from third on line with a nifty short tack to take line honours and their first of three straight wins.

“We got a last minute call to do the regatta, so we met at the boat for the first time at 8am this morning. We are lucky that Jade (Cole – her father owns the boat), had everything ready for us,” ORR crew member, and two-time and reigning Female World Sailor of the Year, Carolijn Brouwer, said this afternoon.

“It’s a long time since I sailed in Melbourne, but it sure put on special weather for us today,” said Brouwer, a multiple Olympian who contested Sail Melbourne a number of times and who was on the winning Dongfeng crew in the 2017-2018 Volvo Ocean Race.

Brouwer agreed that the northerly was puffy and shifty, anything from 3 to 23 knots, but it was a nice day’s sailing. The middle race was the windiest. “You had to make your headsail choice before each race, but it was hard with the conditions changing so much.

“It’s good to be able to continue our message on ocean health and to continue racing with this team. I think it’s amazing to find so many competitive female sailors from all over Australia and one team from New Zealand to do this regatta. It’s been good meeting new people here too,” she ended.

Claire Heenan’s Adams 10, Jungle Juice (NSW), was second in Race 1, and kept the momentum going to land second overall at the end of the day. A Tasmanian team, led by Jo Breen, is in third place after 3,4,2 results.

Breen, best known for her offshore double-handed sailing skills in the Melbourne-Osaka, is skippering the Sydney 38, Chutzpah38, with a crew of mainly top SB20 round the buoys sailors. Some helped sail Absolut to AMS second overall at the 2017 AWKR.

“We had a brilliant sail today. We are really happy with our performance, especially improving in the last race,” Breen said.

“We trained here on Friday afternoon; the first time any of us sailed on Chutzpah. Most of us have at least sailed on Port Phillip, but we’re still not used to idiosyncrasies of the Bay. We’re figuring it out though – and figuring the boat out too,” said Breen, who has also been sailing with the Magenta Project on the trimaran, Ave Gitana, with the likes of Sharon Ferris-Choat.

“We are looking forward to a bit more breeze tomorrow, we’re used to big breeze in Tasmania, and that’s what we like,” ended Breen, who has just co-purchased a Sayer 40 to contest the 75th Sydney Hobart in December and ultimately the 2023 Melbourne-Osaka.

In the 15-boat Division 2, Laura Harding (Vic) skippered Gridlock, a J24, to a pair of wins and a second to lead Kiwi Moth builder and sailor, Holly Farmer, on the S80 Escape (NZL). Farmer, a past National Match Racing champion, leads the 13-strong S80 division. Third is Leo Eeckman (Vic) at the helm of Le Cascadeur, a Southern Ocean 31, after her pair of third places and a fifth.

Of their Division 2 lead, Harding, from Sandringham YC, commented: “A very tricky day. We are trying to get used to each other and the boat. In the last race we had to work our way back through the fleet. It was close racing throughout. It’s a good fleet and good competition.

“This is the first time for us racing this type of boat and in this format,” she said. We all sail different types of boats, from dinghies to offshore racers – and some who haven’t sailed for a long while,” she said laughing with her throw-together crew who represent various clubs from around the Bay.

“We had a few issues with jib sheets coming undone just before the second race, but otherwise we did well.”

The race committee, headed by the AWKR founder, Gai Clough and race officer Lou Hutton, decided to hold three races today, as the weather forecast for the next two days is showing fresh to frightening winds.

Racing started on time at 10am in a northerly on a flat Port Phillip. The first leg brought the yachts to a windward mark situated just off the RMYS breakwater, where they cracked kites, allowing spectators ashore on a sunny Saturday morning the opportunity of watching the race.

The fleet, representing every state of Australia, the Northern Territory and New Zealand, is at an all-time record high of 39, following one late withdrawal. Nine Victorian women are racing their own the yachts, while Janet Thornley trucked her Balancing Act 2 from South Australia. Victorian sailor, Kellie Knowles, handed her Take One over to Ruth Lawrence (NSW), while she sails on Hot D8 at the regatta.

Skippers and crews are restricted to females only. There were a number of partners and at least one father on the water and ashore at RMYS viewing racing. Club officials and those from other Victorian clubs also took advantage of the sunny day to spectate.

Weather permitting, racing continues tomorrow, with northerlies of 16 knots plus with gusts predicted on Port Phillip.