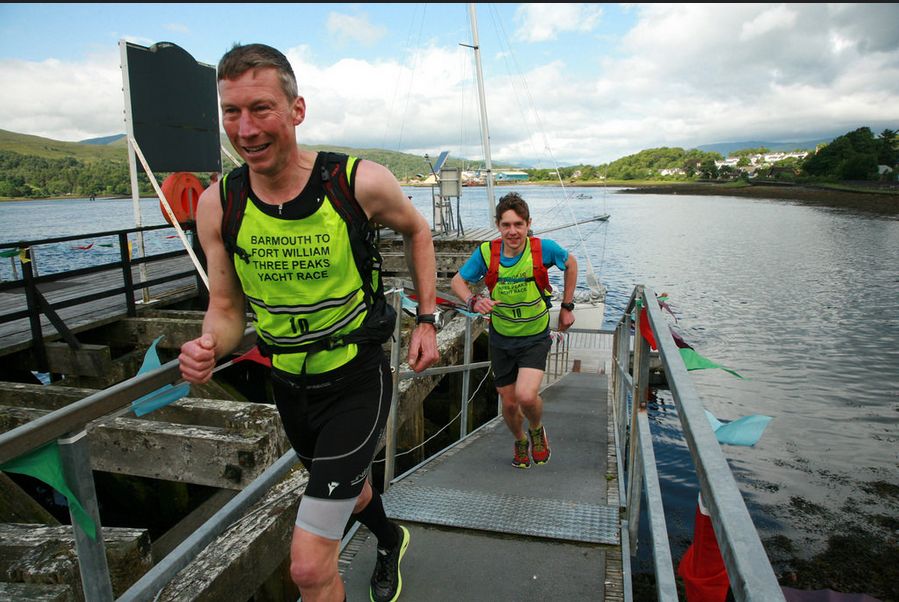 The 42nd Three Peaks Yacht Race starts from Barmouth next Saturday, June 15th, at 19.30 and this year there are 12 intrepid teams of sailors and runners taking part in this iconic race.

The race is one of the oldest multisport adventure challenges in the sporting calendar and has a global reputation and following. It challenges teams of five (normally three sailors and two runners) to sail up the West Coast of the UK from Barmouth to Fort William, stopping off along the way for runners to go ashore and race to the summits of Snowdon, Scafell Pike and Ben Nevis. (The ‘three peaks’ are the highest points in Wales, England and Scotland.)

At sea the race is 389 miles of difficult coastal sailing including the passage of the Menai Strait, rounding the Mull of Kintyre and Mull of Galloway, and finding a route through the tidal gates of the inner Hebridean Isles. The race is non-stop so the crews are racing day and night, the racing is tactical and it doesn’t stop if there is no wind – then the crews get out the oars!

The runners too can be on the mountains in daylight or dark, and their aim is to reach the three summits, even if they set off feeling seasick! Snowdon is a 24 mile round trip with 4000’ of climbing, and just 12 hours later they could be setting off on stage two, which is 40 miles of cycling and 12.5 miles of running to the top of Scafell Pike and back. The final run is the steepest, an 18.5 mile to run to the snow covered peak of Ben Nevis at 4413’ and back.

It is an epic challenge and to succeed teams need great teamwork and endurance. This year the entries include one international team and three of the fleet are multihulls. This turns the clock back 20 years as multihulls last took part in the race in 1998. Since then it has been a race for monohulls only, but for 2019 the multihulls are back!

The multihulls will race in their own separate category with MOCRA handicaps applied to the sailing legs. The entries include an Iroquois catamaran (the only Scottish boat in the race), a Broad Blue Rapier 400 catamaran and the Dragonfly 920 Trimaran ‘Wandering Glider’, which is skipped by Michael Thorneloe, the oldest competitor at 78 years of age.

Runners from both categories will compete together for the King of the Mountains title and for the trophies for each individual peak. The Tilman Trophy for all -round performance is also open to all boats, whether they are multihulls or monohulls, and to win this prestigious cup 4 of the team must reach on a summit. This cup is named after the man whose sailing and climbing exploits inspired the race, and is won by the first over the line so handicaps don’t apply.

The one international entry this year is ‘Denebola’ from Belgium, skippered by Alain Poncelet, who built his own yacht in his backyard. He took part in the 2014 Three Peaks Yacht Race, so has some experience of this unique race and this time is racing with his son Matisse.

There are many competitors coming back to take part in this addictive race again, including Geoff West in his Reflex 38 racing as Wight Rose. He’s only missed four races since 1998 and has won six times in the past.

As always there are a wide variety of yachts entered, including a Pogo 405, a J109, and a Beneteau 40.7. There is a great tradition of military entries to the race and this year the Infantry Training Centre is taking part in the Vancouver 34 ‘Fusilier’.

Among the runners it is always hard to predict who will be the most competitive as the race is such a unique challenge. Those with prior experience have a considerable advantage and this year one of those returning is Czech ultra runner and adventure racer Pavel Paloncy (on Wight Rose), who returns to the race for the third time and has been a winner in the past.

Even so, when the race starts next Saturday even the most experienced of competitors will not know quite what challenges and adventures await them on the journey from Barmouth to ‘The Ben’ – and that is one of the great attractions of this unique race. Anything can happen … and probably will.

The boats will leave Barmouth harbour at 18.30 next Saturday after a full day of family activities on the quayside, and following the first ever running of the new Barmouth 10k road race, which starts at 11.00 am.

The race is supported by Barmouth Town Council and Gwynedd Events, and sponsored by Exposure Lights and Bruichladdich Whisky. The official race charity is The Youth Adventure Trust who work with vulnerable and disadvantaged young people in the outdoors.